You are here: Home1 / IPR regime: a barrier to innovation?

IPR regime: a barrier to innovation?

The correlations between the IPR protection regime on one side, and innovation and growth on the other, were the main topics explored on 19 March at a roundtable on Open Innovation in the Proprietary World. The event was organised in the framework of MAPPING project, funded by the European Commission within the FP7 programme.

Daren Todd, author of the book Pirate Nation and editor of Evolved Publishing, delivered the keynote speech on Intellectual Property Rights: Incentivising creativity or stifling innovation? Addressing the question, Todd focused on copyright and patents, and suggested several IPR discourse fallacies that plague the overall debate on this divisive subject. Authors and artists usually have only a basic understanding of IPR, which means that copyright is not often viewed as an incentive for creativity. Furthermore, the phenomenon of ‘scared to share’ was pointed out. This occurs when the fear of copyright litigation costs leads authors to avoid asking for peer reviews; it also prevents them from sharing their raw pieces out of fear they might be stolen.

The historical parallels drawn by Todd suggest that not sharing a technology may incur serious losses of lives and extensive economic damages. As an example, pharmaceutical companies in our world spend twice as much on advertising than on research and development that leads to patented medicine, so the high-costs arguments defending the restrictions on generic medicines are not fact-based. The current regime also motivates the pharmaceutical companies to create but not to innovate. Patenting software increases its price by 10‒20%. The idea that software patents foster innovations was identified as one of the IPR discourse fallacies. In response to the question in the title, Todd concluded that IPR can do both, incentivise creativity and stifle innovation, and it is necessary to keep the second to an absolute minimum. 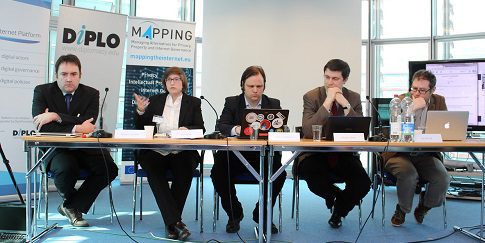 Session 1 of the Roundtable focused on IP policies today and how legal regulations reflect and understand the innovation. Among the speakers, Julia Reda, one of the youngest Members of the European Parliament (Pirate party), co-founder of the European Parliament’s Digital Agenda Intergroup and rapporteur for the review of the 2001 copyright directive, advocated for a European copyright that is adapted to the digital era, easy to understand, and enables the free exchange of culture and knowledge across borders by providing for mandatory minimal harmonisation of the domestic IPR regulations in EU member states. ‘At the moment, innovation takes place despite the policies; the industry is going to stay the same unless we liberalize the rules’, Reda said. Now is the time to generate a momentum for change in the EU, to reach out to the member states and support open innovation. In order to use the momentum to deliver, political will and leadership are needed. People at highest levels need to see the potential and comparative advantage such a change could bring about. There is a lot of lobbying in Brussels, fostering the status quo; a need for an evidence-based approach to policy design is needed.

Rihards Gulbis, Head of the IPR department at the Ministry of Culture of Latvia, current holders of the EU Presidency, stated that legal certainty is a minimum standard for a functioning digital market. A single European copyright framework might be an appropriate solution but there are also risks. First is the very process of drafting and adopting the EU legislation; it is inherently based on compromise, which does not allow for legal certainty. Second is the tendency to keep the area nationalised. There is diverging practice when implementing the existing legislation (2001 directive) despite the findings of the European Court of Justice (a non-mandatory list of exceptions and limitations to the IPR regime). And third is the need for the right balance that accommodates both interests ‒ legal certainty and flexibility ‒ leading to technological innovations.

Jim Killock from Open Rights Group presented the UK approach that in the last years has focused on reducing grey areas and liberalising some areas of the IPR policy, as well as adopting some steps within the Open Data initiative. The final speaker Phillippe Laurent from Marx, Van Ranst, Vermeersch & Partners, a Brussels-based law firm, elaborated on the project of licensing in the IPR policy domain, commissioned by the European Commission.

Session 2 focused on business models for free/open source movement. Nnenna Nwakanma (World Wide Web Foundation) described the process of fostering businesses based on open models across Africa, using open hubs and innovation labs across the continent that are becoming centres of innovation. She mentioned the African Declaration on Internet Rights and Freedom that emerged as a result of a convergence of various stakeholders on the issue (business, policy stakeholders, human rights movements, etc.). ‘The web is genetically “open” and sharing is natural; if it is online, it will be shared. If you want to be private, don´t go online’, Nwakanma stated.

Georg Greve from Free Software Foundation Europe was surprised that the question of how to build sustainable business on the top of free software was still being discussed. Free software represents a freedom to create and build, which turned mainstream in time. Now there is a gigantic global industry based on it. ‘It is surprisingly easy to build a business on providing free software’, he added.

Mario Pena from Safe Creative talked about the ‘lights and shadows’ of open source models and suggested that there is more awareness among software developers about copyright than among artists. The lessons learned can can be used in other areas of human endeavour. ‘We have 156,000 creators with 156,000 opinions on copyright’, he added.

‘Artists use social media for exposure but rarely look or care about the licences, because they don´t understand them’, stated the final speaker of the session Giuseppe Mazziotti from Trinity College, Dublin. [In the follow-up debate, a recommendation was made that software creators should be encouraged to create new platforms based on creative commons licensing for user-generated content.]

The second keynote address was delivered by Georg Greve (Free Software Foundation Europe): Innovation through Liberty. He suggested that no artificial limits be put on innovation. Policies should help to set people free to innovate. ‘Time spent on negotiation is time lost for innovation; everyone needs to negotiate with everyone in a proprietary world in order to know what is allowed’, said Greve. All regulations should answer the question of whether they make sense and help society to develop. In order to achieve that, faith-based legislation should be replaced by evidence-based norms. Models creating sustainable wealth should be also models for society, with less emphasis on profit in the value-vs-profit equation. Innovations need to be implemented, and a good innovator is not necessarily the best person to implement the ideas. Cooperation and coordination are needed in order to capitalise on the process.

Session 3 focused on the links between open data and open innovation, and how open data can be used to spur innovation. Claire Gallon (Libertic) shared their experience with introducing an open data approach to public administration, a process that led to the implementation of a transversal project across various departments, establishing communication and links, and to opening the possibilities of discovering creative commons by the public administration and the possibility to use the licences provided by them. She added jokingly that the best application based on open data is ‘where to find a toilet’.

Dimitar Dimitrov from Wikimedia continued by saying that the creative commons is just a patch; the whole copyright system has to change. Ryan Scicluna from the University of Malta talked about the role of academia in stimulating and facilitating open innovation. [‘Make the free data delicious, so that we can feed on it’, commented Nnenna Nwakanma in the QA session.]

Revenue-generating techniques for Open Knowledge organisations were discussed during Session 4. When managing open knowledge, users should be considered a friend, not an enemy, ‘and friends want to help you, you just have to give them a chance’, stated Maria Swietlik (Internet Society Poland). As an open knowledge publisher, she talked about easy access to the content, allowing people to comment and letting them be the real peer reviewers.

Nicolaie Constantinescu (Kosson, OPENaire) stressed that there is lot of revenue from open access models and elaborated on what will be the choice when it comes to shifting the models of who gets what and how much.

Joe Cannataci from the University of Groningen, head of the MAPPING Consortium, wrapped up the debate.

The photo gallery from the event is available.

Diplo’s Vera Rihackova attended the Round Table on Open Innovation in the Proprietary World on 19 March.