The Internet poses a wide range of challenges for modern diplomacy, including how to protect national cybersecurity, how to govern the Internet on the global level, and how to keep up with the content policy dynamics. These and many other questions were discussed during a number of lectures in Malaysia, Singapore, Thailand, and Indonesia, delivered by Dr Jovan Kurbalija, DiploFoundation director and head of the Geneva Internet Platform, on 12-17 March 2015. 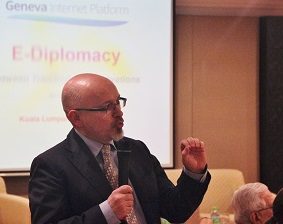 The lunch session on E-diplomacy: Tradition and Innovation was attended by 50 diplomats from Europe and Asia. The session was hosted by the Institute of Diplomacy and Foreign Relations of the Malaysian Ministry of Foreign Affairs.

The Internet: Challenges and opportunities for diplomacy
Singapore, 13 March 2015

Singapore was the second stop on this Asian tour, where a lunch-time talk was organised at the Lee Kuan Yew School of Public Policy. 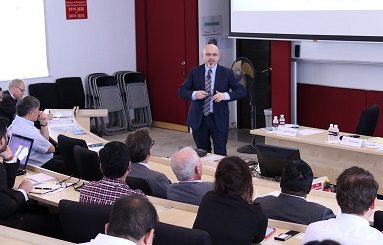 With many representatives of Singapore’s vibrant business community present, the discussion focused on the economic aspects of Internet governance. Questions were raised about differences in privacy and data protection between Europe and Asia. While privacy is not as important in Asia as it is in Europe, the economic value of data is gaining importance. Very often, these two issues – privacy and data protection – are two sides of the same coin.

The plan is to start engaging Singapore’s digital policy community with Geneva through monthly Internet governance briefings. The form and approach for these briefings are being discussed with a few partners, including the Lee Kuan Yew School of Public Policy and swissnex Singapore. 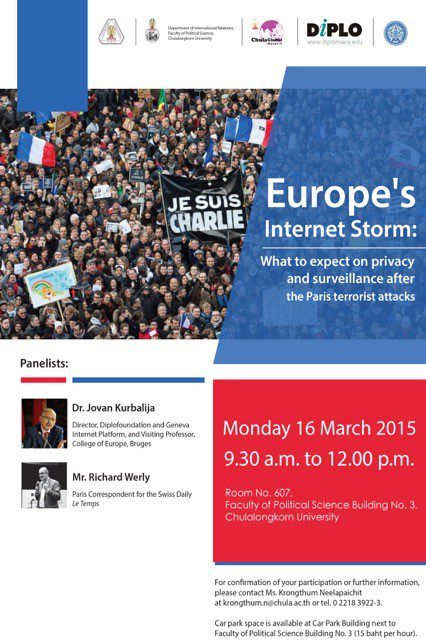 Europe’s Internet Storm: What to expect on privacy and surveillance after the Paris terrorist attacks
Bangkok, 16 March 2015

The luncheon discussion was hosted at Chulalongkorn University’s Centre for European Studies and Faculty of Political Science, Bangkok, Thailand, on 16 March 2015.

After identifying the main challenges for Europe in the wake of the Paris attacks, discussion focused on the challenge of how to manage the delicate interplay between human rights, and the technological and security aspects of digital policy. This discussion resonated well with the current debate in Thailand, as was shown by the vivid debate involving more than 60 participants from academic, diplomacy, and policy circles.

The Jakarta Digital Policy Day included three events. The day began (9.00-10.30) with a lecture on Internet Diplomacy at the Center for Education and Training of the Indonesian Ministry of Foreign Affairs. Dr Kurbalija addressed more than 100 mid-career and junior diplomats on the question of the impact of the Internet on diplomacy.

At lunch time (11.30-13.30), leading business, civil society, and technical actors in Indonesia were hosted by the Minister of Communication and Information Technology who launched the second edition of Dr Kurbalija’s book An Introduction to Internet Governance translated into the Bahasa Indonesia. The session focused on strengthening Indonesia’s IG space, in particular through engagement.

The final event of the day (15.00-18.00) was organised by the Centre for Dialogue and Cooperation among Civilizations and focused on the social impact of the Internet. Social activists, Internet users, and religious figures discussed how Indonesian society can deal with the challenges of modern technology.

View the photo gallery from Dr Kurbalija’s Asian lecture tour. Other updates from the lectures were published on the Indonesian business portal SWA Online and in the daily newspaper Kompas.

Survival guide for the online/in situ blended events: Online participation needs to be part of the agenda

How will WikiLeaks affect diplomacy?