Tech in geopolitics, data tracing apps in focus, and cyber-attacks returning to ‘normal’ were among the main digital policy trends in May 2020.

These and many other developments were covered during May’s just-in-time briefing on Internet governance – our monthly appointment on the last Tuesday of every month – which took place on 26 May 2020. They are also summarised in the Issue 50 of the Geneva Internet Platform (GIP) Digital Watch newsletter.

A look back to events in April

Due to the circumstances, many events have been cancelled or postponed. However, there is an emerging trend of event organisers moving events to online mediums. 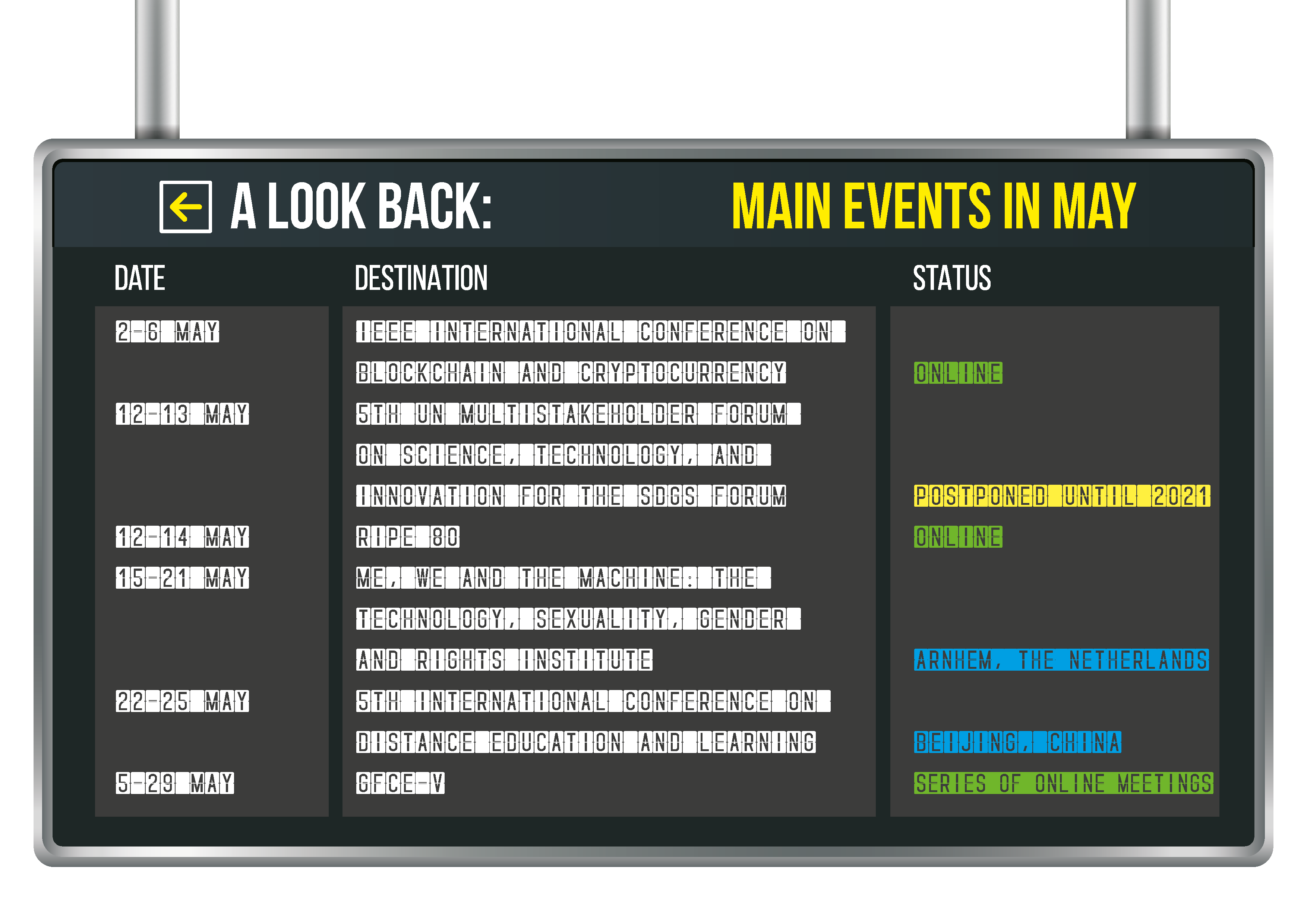 Main developments in May

Radunovic outlined the main developments in the past month:

Teleanu explained that the European Parliament started exploring legal issues surrounding artificial intelligence (AI) and that Microsoft has announced an AI supercomputer. She then outlined the newest developments around the .org controversy, more on which will be available in the Issue 50 of the GIP Digital Watch newsletter.

Main trends in May

The USA-China tech geopolitics have been conducted on a strategic and tactical level, Kurbalija explained. On the strategic level, technology plays an important part in the new US strategic approach towards China which is based on competition. On a tactical level, the USA has imposed new sanctions on Huawei, affecting Huawei’s chip supply. The existing policy of banning sale of chips to Huawei has been bypassed by various subsidiaries out of the reach of the US authorities. The new order requires that foreign companies which manufacture semiconductors using US technology during the production process must obtain export licenses before they can sell those semiconductors to Huawei. A bipolar digital world is emerging, Kurbalija concluded.

Horejsova noted that Diplo and the GIP have extensively followed digital tracing apps and undertook basic mapping of countries that have introduced them. Diplo and GIP plan to continue mapping and move the research’s focus to the international level, specifically on how the pandemic and digital tracing will play out in international relations and diplomacy. At the beginning of May, 42 countries had an app in use, and towards the end of May, the number had increased to 49. Many countries were reconsidering the types of apps they were deploying; and started considering using Apple and Google’s application programming interface (API), as user privacy is considered to be on a level higher compared to other apps. Digital tracing apps can only provide usable data if 60-80% of the population uses it.

Cyber-attacks and data breaches that were reported in May affected; the European Parliament, Europe’s largest private hospital network based in Germany, a company on the UK electricity market, EasyJet airlines, and Australia’s Home Affairs Department. States have continued to make – and deny – accusations: Australia called on states to restrain from attacking health infrastructure; US authorities accused China of COVID-19 research espionage, which China denied; Germany charged a Russian hacker for the 2015 parliament cyber-attack, and Russia denied any connection. The COVID-19 crisis slowed down the work of the UN Group of Governmental Experts (GGE) and the UN Open Ended-Working Group (OEWG). However, over 50 countries submitted written comments on the first pre-draft report of the OEWG, and several focused on the COVID-19 pandemic and the protection of the health sector. On 26 May, the CyberPeace Institute issued ‘A Call to All Governments: Work Together Now to Stop Cyberattacks on the Healthcare Sector’ with signatures of almost 50 renowned figures from the public, private, and civil sector.

Due to the COVID-19 pandemic, many events have been cancelled or postponed. However, there is an emerging trend of event organisers moving events to online mediums. 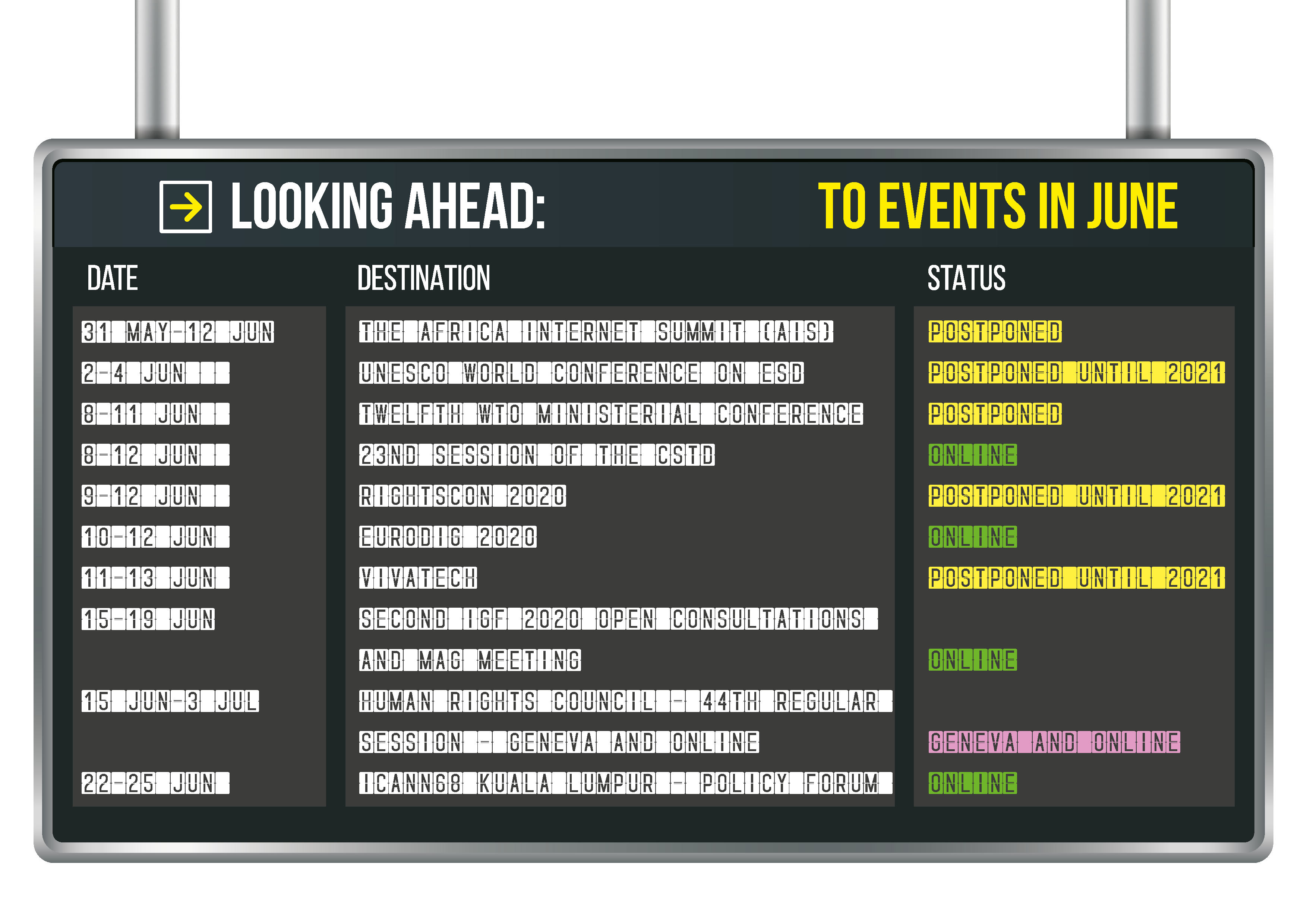 Updates from GIP and Diplo

The next Internet governance briefing is on 30 June 2020. Registrations are open.

The next issue of the GIP Digital Watch newsletter will be published in the beginning of June. Diplo and GIP will co-organise with partners two webinars in the framework of Right on – The Wednesday Web Chat on 4 and 10 June. On 23 June, the GIP and its partners will organise the fourth dialogue of the Road to Bern via Geneva entitled ‘Using (big) data: Making data user-friendly.’ At the end of the month, the GIP will hold the regular monthly Internet governance briefing on 30 June.

Wanda Perez provided updates from the Caribbean, about the Caribbean Telecommunications Union (CTU) and VTCSecure deploying the Caribbean Video Assistance Service to assist people with disabilities; and the Cable & Wireless company implementing measures and developments to support the Caribbean during the COVID-19 pandemic. 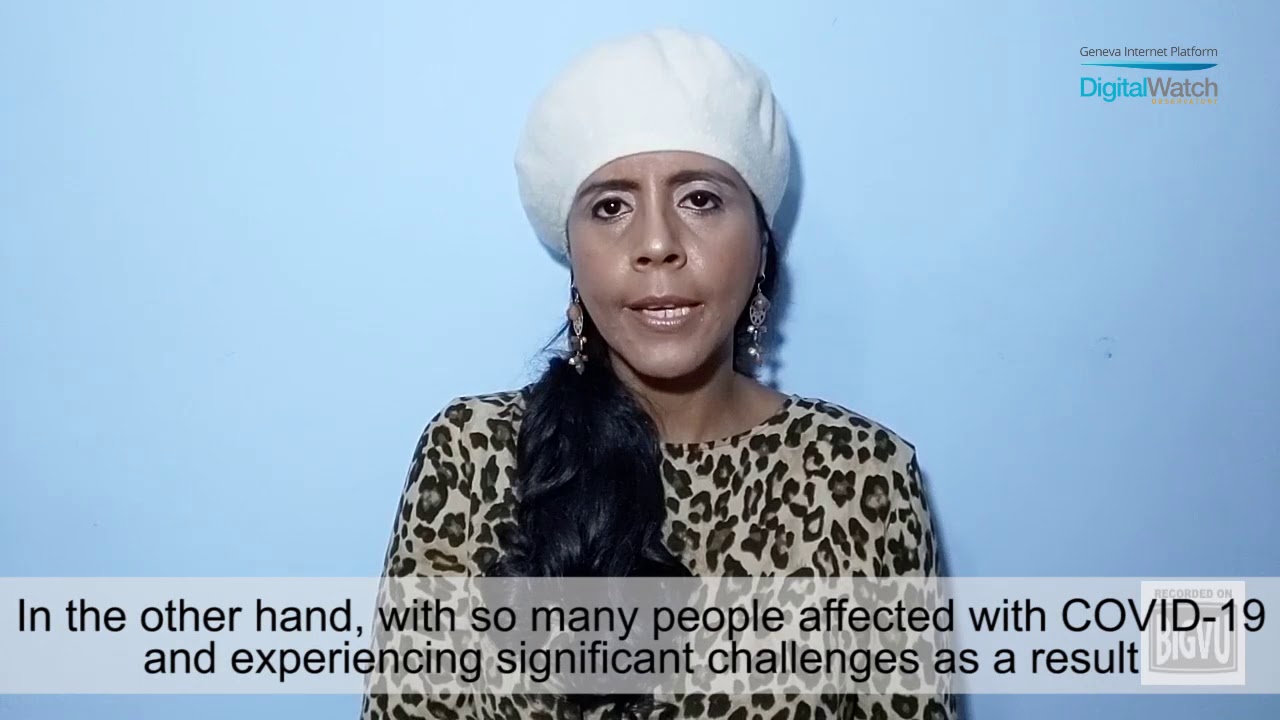 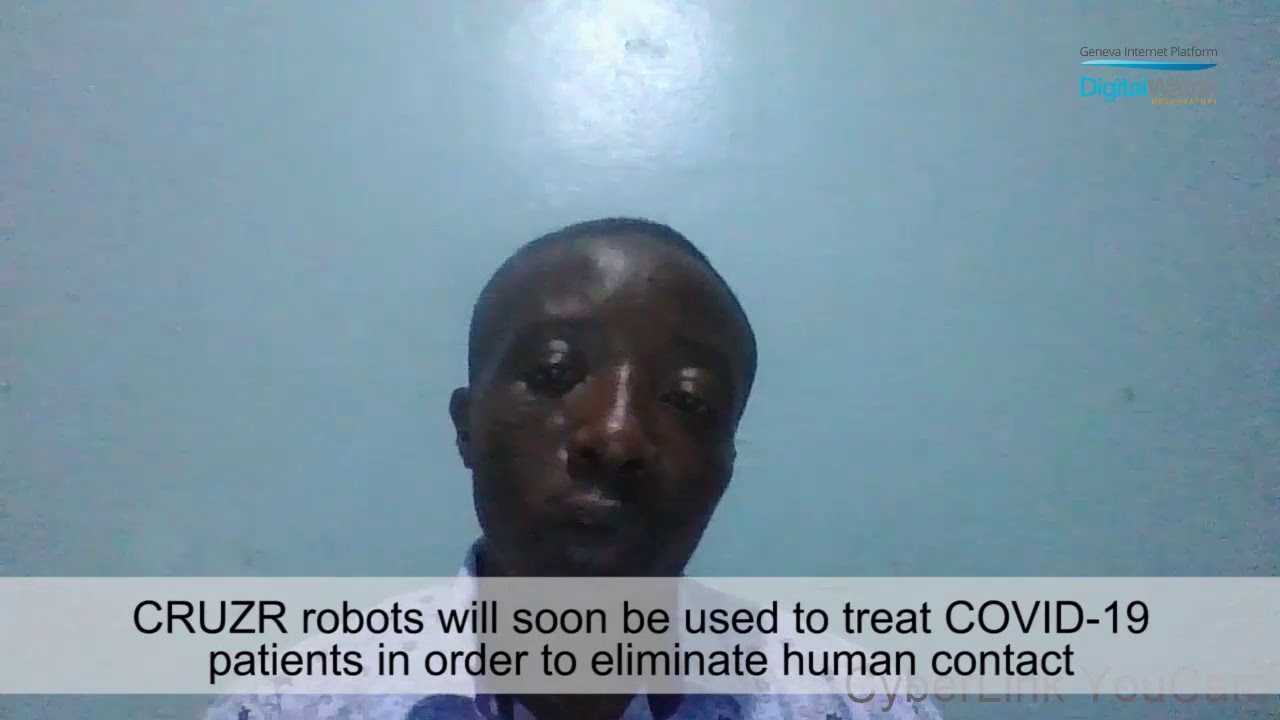 Hanane Boujemi highlighted developments from the Middle East and North Africa (MENA), on UberEats exiting Saudi Arabia and Egypt, the impact of COVID-19 on the tech entrepreneurship ecosystem in MENA, and the expected dramatic reduction of cash use in the region. 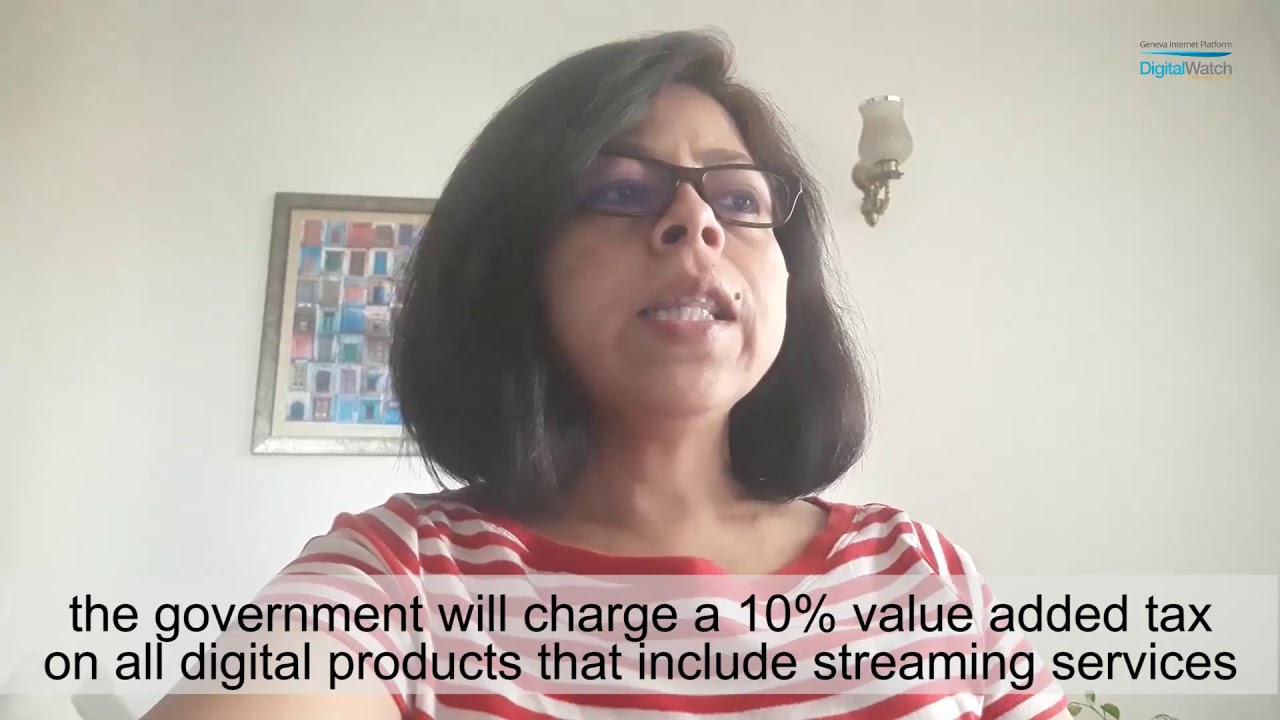 A sneak peek into the chat discussion

The topics of .org sale and contact tracing apps were the two topics that garnered the most attention. Participants discussed to what extent did the request of the California Attorney General impact the Internet Corporation for Assigned Names and Numbers’ (ICANN) decision on the .org sale. They also discussed the efficacy of contact tracing apps and whether less invasive methods would garner more results. Useful resources were shared, including the ACHPR’s revised Declaration of Principles on Freedom of Expression and Access to Information in Africa, and resources to aid teachers and students during the COVID-19 pandemic. Participants also shared news coverage of:

Searching for a European model for net neutrality

GUEST BLOG: The path towards the first Serbian Internet Dialogue