The shorter month of February was packed with developments that are continuously shaping digital policy. Prominent developments in February were the Apple-FBI controversy, and India’s decision to block zero-rating services. The Internet governance briefing for February, delivered by Dr Jovan Kurbalija, director of DiploFoundation and head of the Geneva Internet Platform, highlighted the context in which these developments took place. 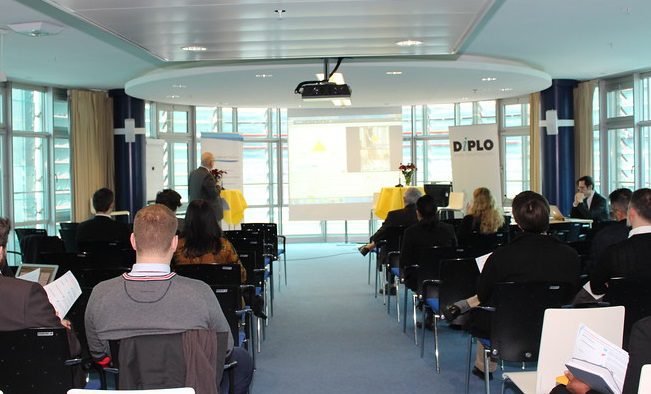 Joining the briefing for the first time was the Jakarta hub, presided over by Mr Rudiantara, Minister for Information and Communication Technology of the Republic of Indonesia. After the hub’s intervention during the briefing, the multistakeholder representatives at the hub continued their discussion on national and other local digital initiatives.

The main highlights this month reflect Dr Kurbalija’s predictions that digital policy will increasingly feature the interplay between Internet users, state, and business. Similarly, the interplay between security, human rights, and business, is also increasingly important. These interplays, which were expected to mark many policy discussions this year, are already being played out through many of this month’s developments. The main highlights, confirmed also by the IG Barometer for February, were the following:

Security: The controversy surrounding Apple and the FBI attracted worldwide media attention, after a US Court ordered Apple to assist the FBI in unlocking an iPhone, with Apple reacting strongly to the court order. Tech giants Google, Facebook, and others came out in support of Apple. This controversy is likely to push encryption, cybersecurity, and privacy issues high on political agendas while the issues are still being tackled in courts [Turn to page 3 of Issue 8 the Geneva Digital Watch newsletter for details].

Human rights: Google is extending the right to be forgotten rule in Europe to its global sites accessed within the region; it will filter results based on European IP addresses.

Net neutrality: After months of controversy, Indian Telecom Regulatory Authority ruled in favour of net neutrality principles and against discriminatory tariffs for data services, blocking Facebook’s Free Basics service in the country. While Free Basics is viewed by many as breaching net neutrality principles, the developments highlighted the dilemma of whether it is better to offer Internet access to a hand-picked range of services than no access at all. [Turn to page 7 of Issue 8 of the Geneva Digital Watch newsletter for details].

E-commerce and Internet economy: Economic aspects were quite dynamic, as the US Senate voted on a permanent rule banning states’ and local governments’ taxing of Internet access, and the European Union announced plans to introduce measures for transactions in virtual currency.

Global IG architecture: In a new report, GSMA shared the perspectives of the mobile industry on digital governance, recommending a ‘reset’ of legacy regulations, which are considered outdated.

Sustainable development: Although not as prominent as it was at the end of last year, the development of the global indicator framework – which will act as a basis for annual progress reports on SDGs – is under way, and is expected to be finalised next month.

Infrastructure: Research predicts an increase in the adoption of mobile technologies that will make the Internet of Everything more sustainable, and a high worth for the Internet of Things in the utility market.

Jurisdiction and legal issues: Jurisdiction aspects were highly prominent throughout last year. In February, the French court ruled that Facebook can be sued in French courts, despite terms of service stating that its jurisdiction lies in California.

IANA transition: ICANN has a new CEO – Göran Marby, Director-General of the Swedish Post and Telecom Authority (PTS) – who will assume office in May, replacing outgoing CEO Fadi Chehadé.

More February updates are documented on the GIP Digital Watch observatory, and in Issue 8 of the Geneva Digital Watch newsletter. 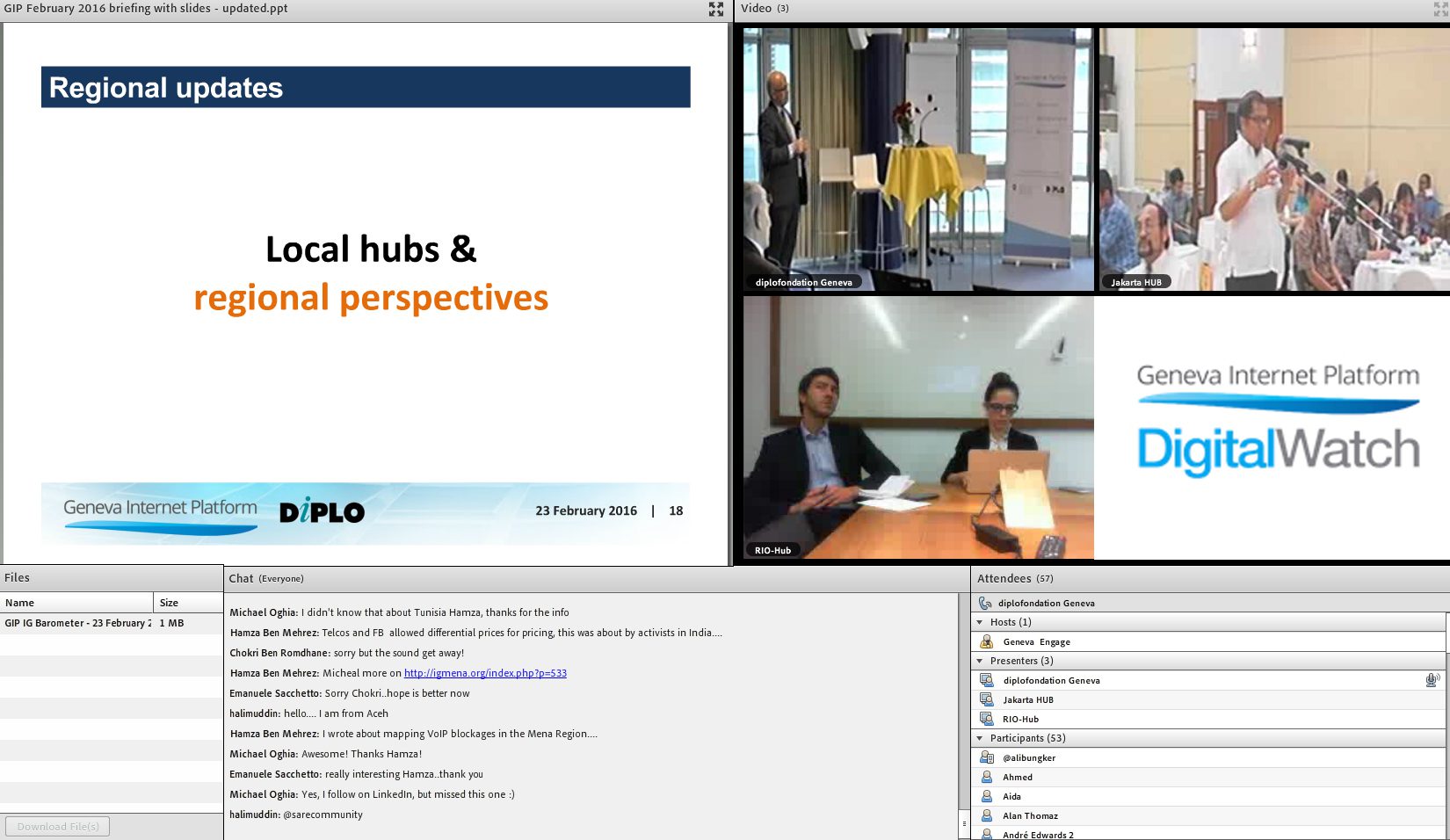 Referring to the discussions among stakeholders in Indonesia, Minister Rudiantara discussed the need to manage Internet content through better governance, based on fair treatment, transparency, and accountability. Existing structures are working, but are not good enough.

The need to manage content arises from the fact that that certain content – such as gambling and pornography, which are major industries in themselves, in some countries – is illegal in Indonesia, which makes it a priority for the Ministry to shield its citizens from this content. Mr Rudiantara referred to a stakeholder model of ‘panels’ in Indonesia, which is proving successful. Yet, there are various ways which can help improve the governance structure, including an evaluation of the existing structure. Methods to improve the structure need to take into account the dynamism of online content. Speed in conducting the reviews, therefore, is of the essence.

Sharing regional perspectives from Latin America, Ms Marilia Maciel, researcher and coordinator of the Center for Technology and Society, Fundação Getulio Vargas Law School, explained that copyright reform and amendments to the Marco Civil are the main developments in Brazil and neighbouring countries. At the same time, Brazil’s bilateral dialogues with France and Germany, in February, have included privacy and data protection as key issues for bilateral cooperation.

Copyright reform – and especially the limitations of using protected works for educational purposes – is currently being debated in the Brazilian Congress. In trying to align national law to proactivity in the area on an international level, Congress is also discussing how to better share the IPR revenue from online protected content.

Luca Belli, researcher at the Center for Technology and Society, Fundação Getulio Vargas Law School, referred to the net neutrality provisions being debated in Congress, as part of efforts to specify core elements of the Marco Civil. In view of the global controversy surrounding net neutrality and zero-rating services, the Brazilian Ministry of Justice has already suggested that ‘specialised services’ will need to be defined if net neutrality provisions will not be set to apply to such services.

Interestingly, the three main ISPs in Brazil have announced that they intend to introduce data caps for fixed networks. Although a similar strategy in Germany was heavily criticised, the reaction in Brazil was surprisingly different, with Brazilian National Telecommunications Agency ANATEL welcoming the announcement on the basis that such as measure would enhance consumer welfare. This development is likely to bring about heated discussion.

Discussions on net neutrality are takin place in other Latin American countries. In Peru, for example, the regulator is currently working on a net neutrality regulation, and an analysis as to whether zero-rating services are compatible or not.

The next monthly briefing – which will tackle developments in March – will take place on 29 March. Meanwhile, the main digital policy events taking place in March are:

Details of each event can be viewed on Events section on the GIP Digital Watch observatory. Visit the Past Events section for event reports and other updates. 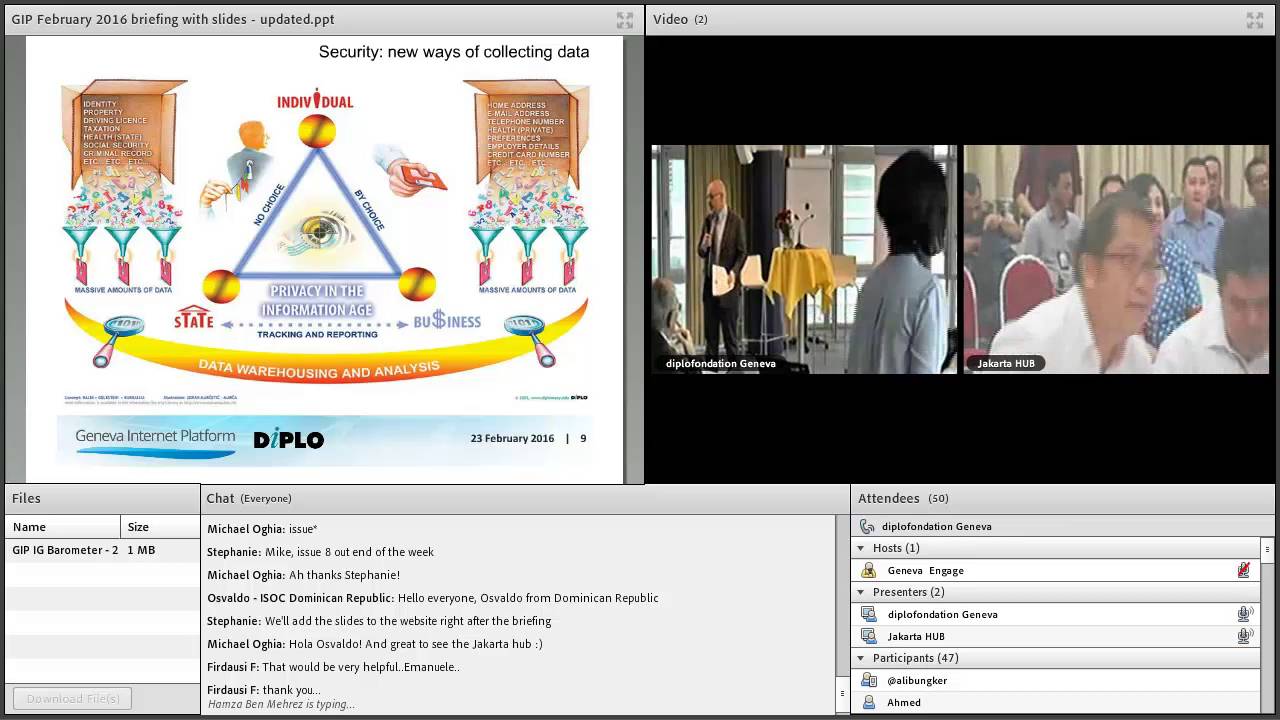 and download the presentation. You can also listen to the podcast of the briefing.

The next webinar briefing – Internet governance developments in March – will take place on Tuesday, 29th March. Registrations are now open. More hubs are expected to join upcoming briefings. Join your nearest hub or establish a hub in your local community.

IPR regime: a barrier to innovation?

Join us during the 7th Internet Governance Forum!

Watch out for the wording: a NETmundial vocabulary

Kazakhstani image in global politics: A bridge between Russia and the rest of...
Scroll to top