You are here: Home1 / Facilitating an integrated approach to digital issues

Report from the fifth panel of the conference The Internet as a Global Public Resource (29‒30 April 2015). The session brainstormed ways and means of how Malta can facilitate an integrated approach to digital issues on both national and international levels. The panel speakers were the Hon. Dr Helena Dalli, Minister for Social Dialogue, Consumer Affairs and Civil Liberties; Mr Tony Sultana, executive chairman of the Malta Information Technology Agency (MITA); Mr Nigel Hickson, Vice-President, UN and IGO Engagement at ICANN (Internet Corporation for Assigned Names and Numbers); and Ms Lara Pace from the Global Cyber Security Capacity Centre, Oxford Martin School at the University of Oxford. DiploFoundation director and Geneva Internet Platform head Dr Jovan Kurbalija moderated the panel.

‘While acknowledging the digital age and its platform as a remarkable advancement towards social and economic development, it is important that the fundamental rights of the individual continue to be respected,’ Hon. Dr Helena Dalli, Minister for Social Dialogue, Consumer Affairs and Civil Liberties, said in her opening speech on the second day of the conference. 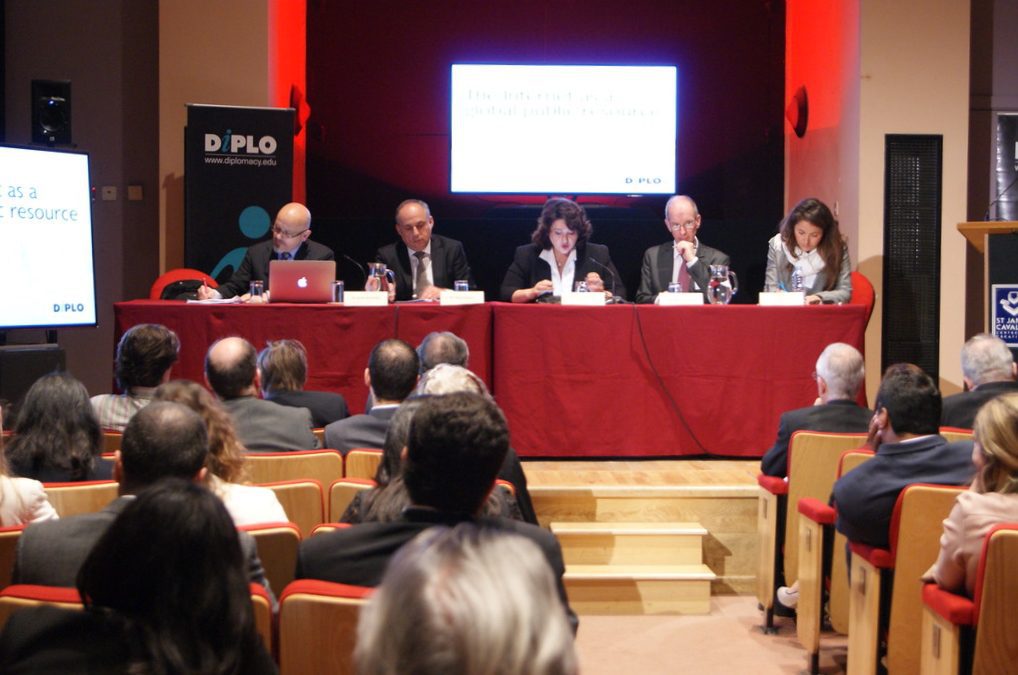 Referring to the right to privacy, she explained that discussions are taking place at European level in view of the General Data Protection Regulation that is currently being formulated.

She emphasised that safeguards under the draft regulation will not be limited to addressing the right to privacy, but will also contribute towards strengthening the public’s trust in the use of online services.

At a local level, the government is working to strengthen e-democracy, in a bid to keep a healthy dialogue with citizens through digital platforms.

‘Striking the correct balance between the protection of fundamental rights and the processing of personal data necessary to provide strengthened services online remains a continuous challenge that Malta is facing, like many other countries worldwide. It is hoped that finding this balance will contribute towards establishing the trust that is essential in obtaining and further encourage social dialogue and participation,’ Dalli concluded.

While MITA was the IT provider for ministries and departments, it was now providing systems directly to citizens. Referring to the policy-setting process, Sultana explained the three elements that need to be at the basis of the process:

Mr Nigel Hickson, Vice-President, UN and IGO Engagement at ICANN, lauded Malta’s progress in ICTs on two levels: ‘The first level has been the success in the infrastructure, the ability to connect people, the ability to show people how to access public services in a digital way. [The second] is the thought leadership that Malta has. And this is really what sets the country apart. It is the ability to evoke ideas, the ability to spread knowledge that I think is really going to put Malta on the map in terms of the digital economy.’

Hickson explained how the discussions about the Internet as a resource that we need to conserve have been fundamental. We need to accept that the Internet is here. We can always do better in making sure everyone is connected, but we also have to address the Internet as we addressed the sea and other resources.

‘We have to look beyond our national borders and that’s why this analogy with the protection of the sea […] is so good.’ He said the analogy makes us think beyond the land, and is therefore a good analogy for the global role that the Internet plays.

Hickson offered two suggestions to tackle at national level. The first relates to domain names, in that Malta can be further encouraged to explore its national and social identity through new domain names (e.g. dot Valletta). The second is for governments to come together with civil society, business, and other actors to form national policy groups in which to discuss the issues of Internet governance, including cybersecurity, privacy, and protection of intellectual property, following the examples of similar initiatives in Brazil and the UK.

‘Turning to the global scene […] Malta is already playing a very important role and I think it can play an even more important role.’ The Commonwealth Heads of Government Meeting (CHOGM) and the Presidency of the European Council presented both an opportunity and a challenge, he concluded.

Ms Lara Pace from the Global Cyber Security Capacity Centre, Oxford Martin School at the University of Oxford, also lauded Malta’s progress, through which it has been transformed into a ‘real champion in the digital world’.

Referring to capacity building in the cybersecurity sector – a focus area of the Oxford Martin School – Pace emphasised the need for multidisciplinary comprehensive programmes which are sustainable, and the need for international cooperation.

She said Malta should take a driving seat to really address this challenge. Fragmentation is a worldwide problem, and the biggest challenge is to overcome silos within countries. ‘We really need to make it a reality and I think Malta is very well placed to do that,’ she concluded.

Jet lag and the IGF 2013 in Bali: Whom will it hit hardest? Are we prepared?