You are here: Home1 / Europe’s role in shaping the future of the Internet

Europe’s role in shaping the future of the Internet

The European Commission is undoubtedly a very active player in the Internet governance (IG) process. One of the most recent developments from Brussels is a communication adopted last month, on 12 February 2014, on Europe’s role in shaping the future of the Internet.

In it, the Commission calls for concrete, actionable steps to address the globalisation of core Internet decisions, including ICANN and IANA functions, a more transparent, accountable, and inclusive multistakeholder process, and a strengthened Internet Governance Forum (IGF).

Andrea Glorioso, an official of the European Commission and member of the Task Force on Internet Policy Development which developed the proposal, explained that the Commission has undertaken to carry out a number of actions, in close collaboration with other stakeholders.

Speaking during Diplo’s IG webinar on the subject, Mr Glorioso explained that these actions include establishing a coherent set of global IG principles, consistent with fundamental rights and democratic values; launching the development of the Global Internet Policy Observatory (GIPO) later this year; fostering capacity building initiatives to promote multistakeholder processes, especially in countries where these processes are less developed; strengthening its development assistance programmes; convening a series of workshops with international experts in laws, ethics, social sciences, economics, international relations, and technology, in order to better understand the complex relationships between technology and public policies; and working with the European Council and Parliament to adopt and implement key legislation to strengthen online trust, including the reform of the data protection framework.

Mr Glorioso explained that the European Commission has long since adopted a broader notion of IG which goes beyond discussions about ICANN or the IGF and encompasses an ecosystem of different actors, institutions, and stakeholders.

‘We believe that having trust in the Internet, in its technical operations, in its governance framework, is a prerequisite for a sustainable ecosystem of the Internet. It is not sufficient for us to be happy with what we have today’, he explained. Our responsibility is to think about what the future holds: how can we ensure that the governance framework, at different levels – global, regional, national – is strong, accountable and flexible enough to cope with change and with the fact that it is not the same Internet as that of the previous century?’

Through its communication, the Commission is also confirming its official position on IG, which supports multistakeholder governance structures that respect and promote fundamental rights and democratic values, and a single and unfragmented network.

The European Commission strongly supports the multistakeholder model. However, we cannot ignore the legal environment, designed to protect rights, with its democratic checks and balances. In intergovernmental discussions in which Internet policy is discussed, the Commission’s aim is to inject as much stakeholder participation as possible.

Mr Glorioso also warned that just because we call a process ‘multistakeholder’ does not automatically mean it is a good model by definition. In addition, everyone is using the term liberally, often attributing different meanings, which creates confusion. Multistakeholder processes require certain mutually agreed baselines of transparency, accountability, inclusiveness, and the absence of conflicts of interest.

Which is the best way to ensure that future developments in the governance of the Internet can sustain the changes, at least those that we can envision? Borrowing the term from processes related to the environment, Mr Glorioso said that the IG process requires stewardship, a notion that does not involve control or regulation, but rather collaboration with other stakeholders with the aim of strengthening the Internet’s global governance. 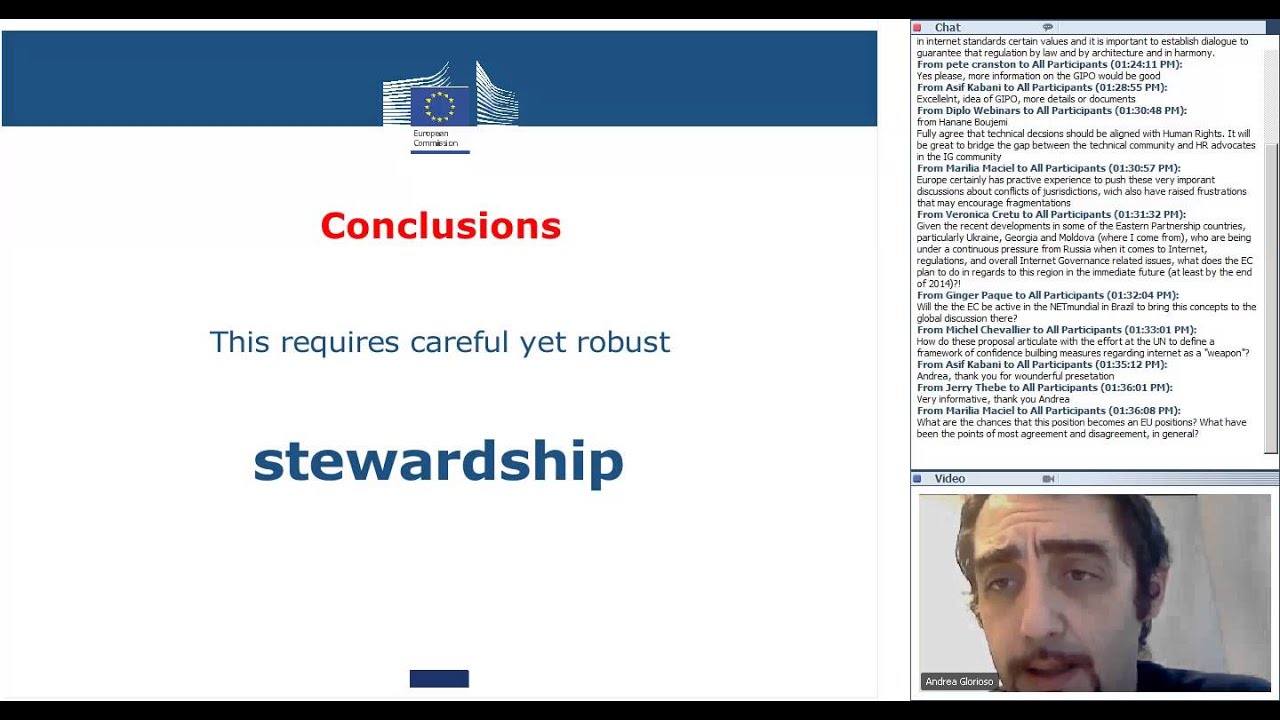 Stakeholders? On tap – not on top!

The articulate diplomat’s best friends: book donations to the Myanmar MFAOops! What did I do wrong?
Scroll to top