You are here: Home1 / eDiplomacy in a Balkanised Internet

eDiplomacy in a Balkanised Internet

“The net is finished as a global network” wrote John Naughton this weekend, in a major UK Sunday newspaper, which, ironically, is part of the British press which he rages have lost the plot in their reporting of the NSA/PRISM revelations as largely about the whereabouts and options for Edward Snowden. Naughton isn’t alone: “Did Obama just destroy the Internet” was typical of many comments in the immediate aftermath of Snowden’s early revelations.  Evgeny Morozow makes the same point in a superbly argued and gloomy article, “Information Consumerism, The Price of Hypocrisy”. Naughton and Morozow both point to the new perspective we’ve gained on the once widely-mocked focus on ‘information sovereignity’ by Russian, China and Iran, and indeed the launch of an Iranian national email system. Naughton suggests this is only the beginning, and that the unitary Net, one of the 20th Century’s crowning achievements, will be split up along power-boundaries, a prospect which is far more serious than even the spectre of a ‘two tier’ net, in the struggle to maintain net neutrality. 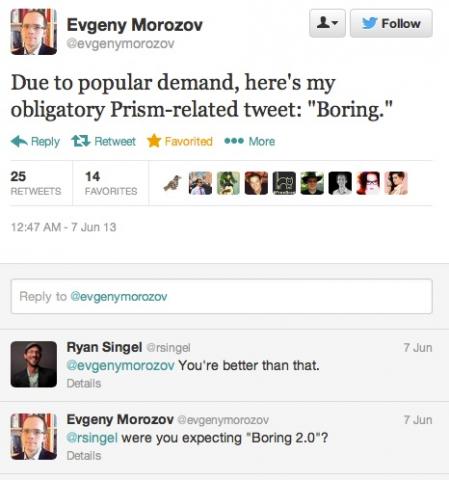 Morozow’s position is interesting given his studied nonchalance at the outset of the NSA/PRISM affair when he tweeted, ‘Boring’ in response to ‘public calls for my statement’ – though I think in his joke2.0 opposite he reclaimed something of his cool! His article goes deep into what he calls, ‘information consumerism’, a mind-set now embedded deep into our culture that he likens to the disastrous impact of our naïve belief that carbon is a commodity whose purchase was simply to do with market pricing. In both cases, he argues, we have lost sight of ethics and morality in our decision making. In the case of Information Consumerism he argues that we are blindly, voluntarily, walking ourselves into a world where ‘information commodification’ means all the data from our favourite web tools or Internet connected smart gadgets will be on sale to the highest bidder.

Morozow is always worth reading and this particular, radical, position provides an interesting vantage point from which to reflect on what the continually unfolding events might mean for e-diplomacy.

1.     The case of Eva Morales’ enforced stay in Austria: the understandable outrage in Latin America and beyond about this infringement of diplomatic immunities – ironically, displayed on the US based social media platforms at the centre of much of the controversy –  demonstrated that, when push comes to shove and the interests of global powers are threatened, we return quickly to the Billiard Ball world, with Slaughters Lego world lying in pieces on NATO territory.

2.     Cloud services are revealed as insubstantial as, well, clouds. Naughton quotes Neelie Kroes, vice-president of the European Commission: “If businesses or governments think they might be spied on,” she said, “they will have less reason to trust the cloud and it will be cloud providers who ultimately miss out.” . This could also have a huge impact on those of us who rely on the cloud for cheap, convenient, relatively stable systems for storage and communication – willing dupes of the Internet marketeers, as Morozow would have it – but it will also bolster the position of those who have stubbornly argued for the importance of national and organisational firewalls as well as institutional repositories.

3.     Just when you thought it was safe to go into cyberspace: “the term digital diplomacy is almost redundant — it’s just diplomacy, period”, said a confident Sec. of State Kerry in May of this year. While the onward march of politicians and diplomats onto Twitter continues, it is almost inconceivable that the use of social media by diplomats will continue as it has been. The willing collaboration of the major US providers of web services with the US national security agencies has left an unpleasant smell in the air. Facebook is already losing ground amongst the key – to social media – younger demographics but, at the moment there are few viable alternatives. Straws in the wind such as the success of  simpler messaging systems like Whatsapp and, importantly, East Asian alternatives such as WeChat or Line hint at what might be around the corner.

4.     There may also be a renewal of interest in the traditional role of Diplomats, with their language skills, contacts and thorough understanding of geographical and cultural nuance (as well as their legendary charm and imperturbability!) Far from being marginalised by increased bi-lateral contacts between national Ministries and civil society across a globalised Internet, in a fragmenting Internet, commercial or Government interests will once again recognise the value of specialists in national/regional relations. Except that those specialists will also have to become expert in what might be a cluster of important social media or chat applications, able to navigate national cyberlaws as well as cultural conventions, rather than following the crowds into a few US-owned mega platforms.

Change was always the only constant!

Citizen engagement: We lack ambition in design, not technology