You are here: Home1 / Cybermediation: What role for blockchain and artificial intelligence?

Last week, the Geneva Internet Platform hosted an event on #Cybermediation, as part of the #Cybermediation initiative. The discussion, moderated by DiploFoundation’s Interim Director Dr Stephanie Borg Psaila, focused on the role of blockchain and artificial intelligence (AI) in supporting mediators and their efforts. In his initial comments, Mr Enrico Formica stressed that it is important for mediators, who are more ‘analogue’ in their approach, to understand the role of new technology, and its potential for facilitating mediation.

The speakers, Ms Katharina Höne and Mr Dejan Dincic, then focused on AI and blockchain respectively. They both stressed that technology is not here to replace human intelligence and ingenuity, emphasising the need for pragmatic approaches that focus on how technology can support specific tasks during mediation.

Höne began by emphasising that talking about #cybermediation means entering and navigating an in-between space. She argued that we need to navigate between hype and dystopian visions by finding pragmatic approaches, and that we need to navigate between two different cultures – the world of diplomats and mediators on the one hand, and the world of programmers and technical personnel on the other. She argued that the promise of technology for diplomacy and mediation is four-fold: saving resources and time, generating new insights, supporting the work of people in the field, and, ultimately, contributing to better conflict resolution and a more peaceful world.

In explaining AI, she emphasised that this is not about robots replacing humans. Rather, AI is, in the first instance, ‘the study of systems that can make intelligent decisions’. However, while we have seen many advances in AI, she cautioned that this is not a general intelligence, but that each success of AI, such as AI beating the world Go master or winning at Jeopardy, is focused on one specific task. Further, focusing on these prominent examples obscures the smaller, less tangible changes that happen in a more incremental way in daily life. Höne went on to emphasise that recent successes are due to the advancements in machine learning, and gave insights into how AI goes about understanding human language.

She argued that the promise of natural language processing (NLP), a subfield of computing and AI that is concerned with programming computers to process and analyse large amounts of natural language, is especially important in the context of diplomacy when it comes to research, analysis, and preparations for negotiation. NLP promises to allow negotiators to go beyond search-term queries, extract information from large amounts of text, use unstructured data, find patterns and connections, and gain new insights. Particular challenges include: understanding context, dealing with large and diverse vocabularies, dealing with different meanings, and grasping word play and ambiguity.

After explaining in further detail some aspects of NLP, she suggested that these tools can be used to support the work of mediators, especially when they prepare for mediation. Looking at the information and guidance already available to mediators, she suggested that AI will be important in making the retrieval of relevant information easier and providing analysis based on existing information. More specifically, she suggested that the UN Peacemaker platform provides a vast amount of useful resources. Smart searches would allow for more convenient and insightful access to the Peace Agreement Database. Further, the various documents available on UN Peacemaker, such as the Mediation Guidance and the Mediation Support Overview could be integrated to allow for insights being generated on the basis of smart searches and NLP. In this regard, AI could facilitate the preparation and research of mediators and free up their resources by allowing for efficient access to existing knowledge. 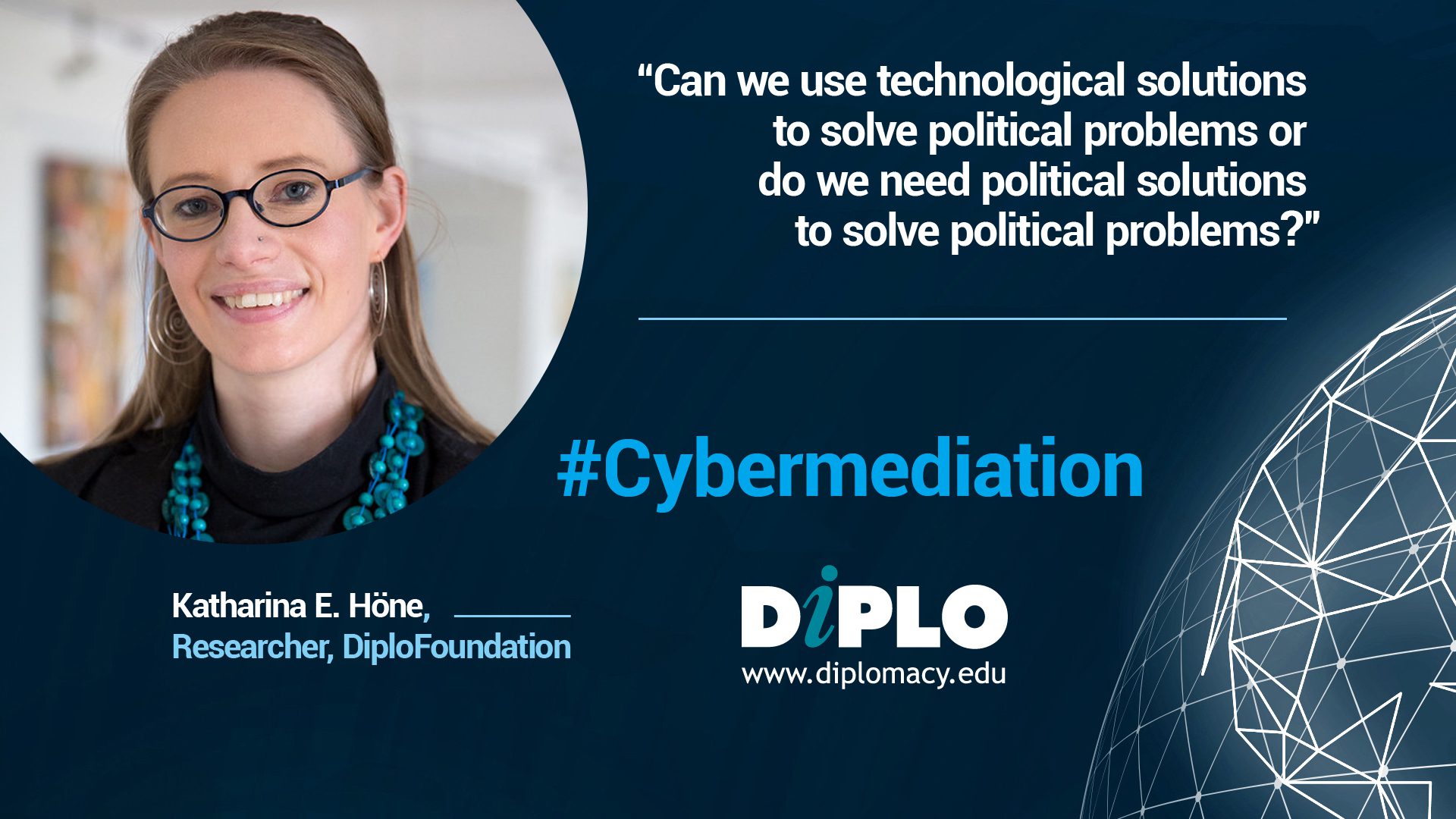 While Höne focused on the preparations for mediation that make use of all the available information and existing insights, Dincic put an emphasis on the role of new technology during monitoring and implementation. He introduced the ideas behind blockchain technology, its potential uses, and its application in the context of mediation.

Dincic began by highlighting that there are substantial expectations associated with blockchain technology. Bitcoin, a cryptocurrency – and one of the most prominent examples of blockchain technology – created a hype. But blockchain is also discussed in connection with achieving the sustainable development goals (SDGs) in relation to e-voting, e-health, public registries, alternative governance and other areas of application.

He described blockchain as a ledger that is distributed and immutable. It uses cryptographic mathematics and computation transparently to ensure impartiality and integrity of data. In practice, blockchain builds on a community organised in a network that is based on open source software, and uses cryptography to ensure consistency and immutability of records. Open source software allows the community of users to decide on a set of rules that they agree on and to implement them. Changes to the software and the associated set of rules need to be agreed on by the community and implemented by the majority of them.

However, Dincic also warned that there are still no large-scale applications of blockchain, despite the technology having been available for a number of years now. He argued that the uptake is slow because it requires new types of governance. Having said that, he mentioned a number of emerging applications. These include the Food Trust Project which tracks food supply chains to improve food safety; And the World Food Programme’s innovation lab which initiated pilot projects that allow people in refugee camps to retrieve WFP-provided assistance through the blockchain-based system. In legal contexts, there are explorations underway for using blockchain for smart contracts and dispute resolution. 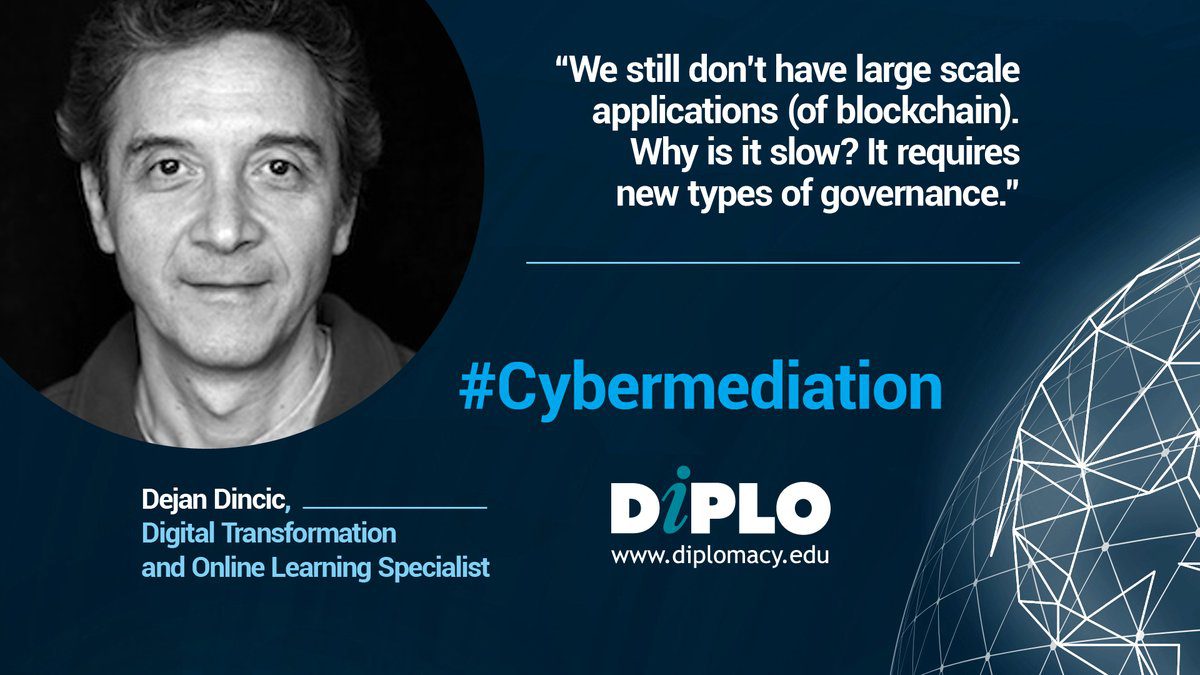 However, Dincic stressed that these examples are not easily transferable to the context of political mediation. In this regard, he developed a hypothetical scenario that highlighted possible applications of blockchain technology for monitoring and implementing agreements. Here, blockchain could play a role due to its objective, neutral, transparent, and decentralised nature. In the hypothetical example, there is a river shared by three countries, and there is a conflict about the use of the shared resource. Perhaps an agreement could be reached, or the conflict avoided, if all the parties were reassured by neutral monitoring of the water use. For example, co-ownership of a blockchain, distributed among the three countries, and possible co-ownership of a regional or international body (the UN, for example), could be combined with smart sensors that feed data directly into the blockchain. In this way, transparent and live reporting is ensured and findings are recorded in an immutable way. Dincic emphasised that rules of verification have a technical solution which is built into the software based on the agreement between the participants. While such applications are yet to be developed, examples like this indicate that blockchain could support the monitoring and implementation of agreements, and support the work of mediators.

Questions from the audience pointed to further applications of both technologies, and pointed to the necessary changes in governance models underlying the processes for blockchain application. They also raised concerns regarding the digital divide and practical implementation.

The reality of science fiction: Behind the scenes of race and technology