You are here: Home1 / 5 things to know about central bank digital currency (CBDC)

Digital data as a legal tender

Throughout history, money has evolved, changing its shape. From seashells, paper money, and gold coins, the path of evolution has brought us to ‘contactless’ money.
Looking at e-money widely used today in local and international trade, we might think that it is a form of money that is not physical. The daily use of credit cards, digital bank accounts, and money transfers has pushed paper money out of our hands. But, this is only the case for money users. For money issuers (national banks around the world) digital money is not that different from ‘physical’ money or FIAT currency. The e-money institution determines the ‘final use’ of a certain currency. All that numbers in computers should (in theory) be backed by ‘real’ physical money created by national mints. Central bank digital currency, or CBDC for short, will be built using a different blueprint. 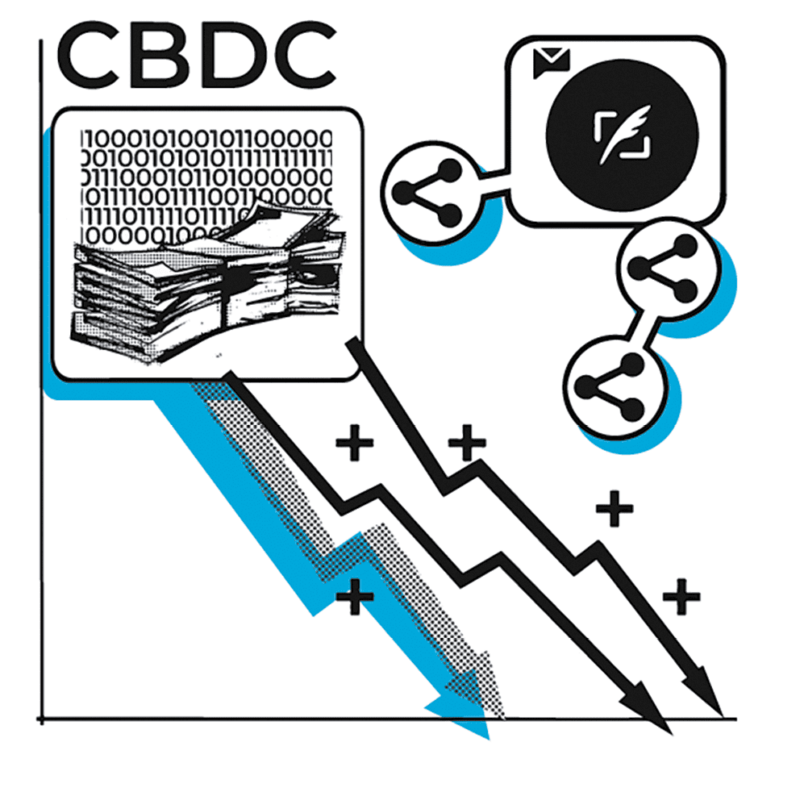 1. CBDC will not have a physical form

The fixed exchange rate or the ‘gold standard’ as we know it colloquially, ended in 1971, and today’s national currencies are not backed by gold bars, oil or any other form of commodity. The idea is that states use reasonable financial policies to control money issuing in order to balance inflation and support the local economy. The last important ingredient is trust. Citizens and foreign governments alike need to believe that national financial institutions do not create more (or less) money than reported. Some states do provide factual and transparent information, but not all. With the emergence of CBDC, money issuers will use digital information as a legal tender. The ‘banknotes’ will be in the form of digital data placed in digital wallets. This will not change the basic role of central banks – they will remain ‘the keeper of the ledger’, but will mark the line in history when we move such important information to a new format. For the last 620 years, paper has been a weapon of choice.

2. There will be two different forms of central bank digital currency

Based on the recommendations of the Bank for International Settlement (BIS), future national currencies should provide different versions of their digital counterparts. The paper on policy framework for CBDCs advises two types of digital currency.

In the initial phase, CBDC would be used alongside cash. National banks still have no plans to fully withdraw from the use of cash. Below is a scheme of the national digital currency proposed by the Bank of England and depicts the solution used by national banks in many pilot programmes 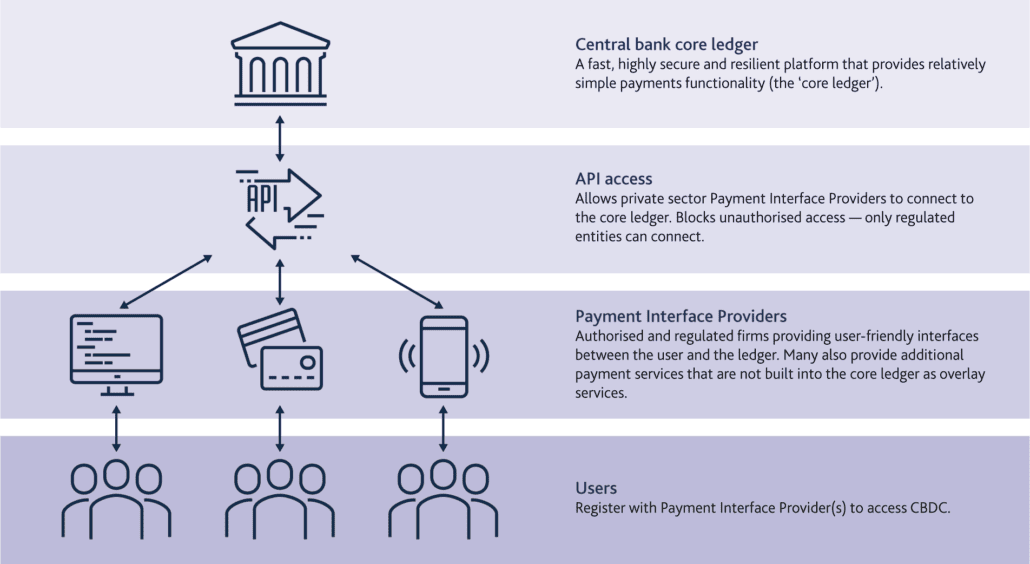 Scheme of the CBDC design. Source: The Bank of England

3. Standards will play an important role

The managing director of the International Monetary Fund, Kristalina Georgieva, pointed out that governments around the world will need initial help from private companies to establish a new digital system. The technology used in CBDC called distributed ledger technology, or DLT for short, is quite similar to the blockchain tech used in open-source cryptocurrencies (such as bitcoin). There will, for sure, be a lot of places for public-private partnerships, and industry around crypto technologies will continuously support the financial world. With the strong entry of the United States, foreseen after Biden’s signature on a new initiative for digital assets regulation, the USA triggered the start of the race in technology.  Anyhow, all parties agree that a unique framework around standards should particularly look at:

Finance ministers of the G7, a group of seven biggest world economies, together with the BIS and the Swiss National Bank, called for ‘international co-operation to ensure common standards for the regulation of stablecoins’. Stablecoins are private versions of digital currency pegged on the price of the most powerful worldwide currencies (dollar, euro, yen, pound). National banks will have to control powerful tech companies and other non-state players to develop digital money alternatives. In some predictions, the existence of private digital currencies may lead to the destabilisation of national currencies around the world. In the end, this may result in losing control of monetary politics as leverage for national actions.

In the digital age, trust is something that is not easily achieved, knowing that digital information can be manipulated. The important part of the CBDC’s success will be in providing security mechanisms to protect users’ privacy. The privacy of financial transactions is of utmost importance. Some of the criticism comes from the human rights community that is concerned about the control of citizens by oppressive governments.
In the future plans for CBDC, ‘programmability’ of money is a striving goal. The easiest way to imagine programmability is to imagine, for example, money that can be spent only in a certain way. This raises concerns about control mechanisms that can be imposed, and some groups see it as part of social reward systems, often mentioning China’s fast push in the development of the digital yuan as a reason to boost the social reward system.

The future of digital currencies will depend on the resilience of the global internet, and the operability of its parts. If the internet starts falling apart along national and platform divides, this will limit the usability of digital currency as a tool for global trade.
If, on the other hand, the internet remains open and fully interoperable, digital currencies are likely to engage in competition in the global digital market. The new race will pose a challenge for ‘old’ brick and mortar financial industries. They are facing competition from the more agile, and in particular, players with understanding and access to the local market as has been the case with the M-Pesa online mobile payment service, which celebrates 15 years of existence of profoundly changing digital finance in the African continent.