Geneva, Switzerland, 9 June, 2017: Graduates of the Just-in-Time Course on Digital Commerce were in for something innovative as they attended their graduation ceremony on 7 June, at the WMO Building in Geneva.

In addition to the traditional certificates, the Geneva Internet Platform (GIP) awarded Blockchain Certificates to the 32 graduates.

This marked a first for an organisation in International Geneva, as GIP head Dr Jovan Kurbalija explained during the ceremony. The certificates are innovative in that they are signed and linked to the Bitcoin blockchain, allowing anyone to verify their authenticity. 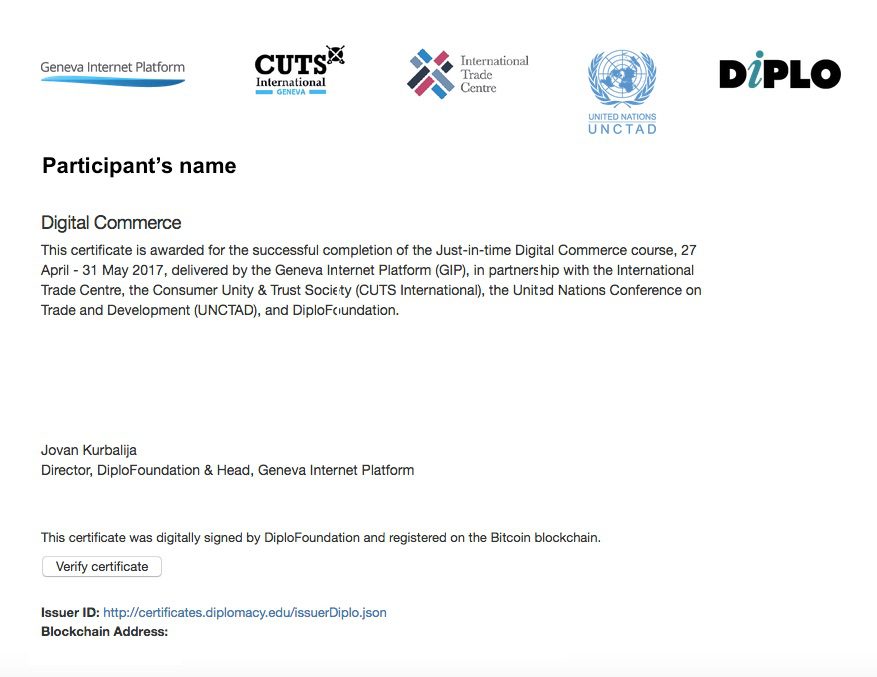 Blockchain technology may soon revolutionise digital signatures, with technologists and legal experts also eyeing the widespread use of technology for smart contracts. One of the reasons, according to Diplo’s Technology Advisor Dejan Dincic, is its distributed technology, wherein multiple copies of a document are stored on computers, forming part of a network. In addition, the system ensures the integrity of data, in that any change to a document is tracked.

The economic implications of blockchain were discussed by a panel of experts, including Marion Jansen, Chief Economist at the International Trade Center; Michael Kende, Visiting Lecturer at the Graduate Institute; and William Taborda, Associate Information Systems Officer at UNCTAD. They referred to trust systems, Bitcoin volatility and value, and related systemic shifts we experience in both developed and developing countries.

Graduates of the Just-in Time Course on Digital Commerce, which ran from 26 April to 31 May 2017, included diplomats who are following digital commerce negotiations on multilateral and bilateral levels, and other professionals in the field of trade, representing a total of 28 countries from Africa, the Americas, Asia, Australia, and Europe.

The blended learning course format included online discussions and weekly face-to-face meetings. During the online discussions, participants posted 832 comments that contributed to rich discussion threads on topics including data and money flows on the Internet, the economic policy issues of relevance for trade, Internet governance, and emerging technologies.

The course was delivered by the GIP in partnership with the International Trade Center (ITC), the Consumer Unity & Trust Society (CUTS International), the United Nations Conference on Trade and Development (UNCTAD), and DiploFoundation.