You are here: Home1 / What links Fernand Braudel, NETmundial, and São Paulo?

Diplo has a tradition of making a link between major Internet governance (IG) meetings and their venues. For example, when the IGF was in Athens, Greece, we noted the relevance of Plato’s writings for modern digital politics.[1] Before the IGF went to Sharm El Sheikh in Egypt, we discussed the relevance of the ancient Tal-Amarna diplomacy to our time.

I discovered Braudel back in the 1980s during my university studies on causation in history: Why did things happen the way they happened? Could they have happened differently, if …? He provided an inspiring change to the predominant historical determinism of that time: dominant Marxist historiography. I found myself returning to Braudel this year in the context of a discussion on the causes of the outbreak of WWI.[3]

Fernand Braudel was a member of the so-called Annales School.[4] They argued that one can understand history only in its totality. ‘Total history’ requires a complex toolkit including economy, anthropology, philosophy, law, to name just a few of the requisite disciplines. To translate into today’s terms, the Annales School had moved beyond historical ‘silos’ of focusing on events to conducting a broader analysis of the social and economic causes of historical developments.[5]

Braudel’s teaching centred on three historical dynamics: (i) slow and long-term changes (longue durée), changes in geography that take thousands of years; (ii) medium-term changes in economics, politics, and technology that happen within a span of a few generations or a few hundred years (conjuctions); (iii) short-term changes as a sequence of years, events, and personalities. Typically, we understand history in a short-term perspective.

Robert D. Kaplan, in his book The Revenge of Geography, explains the three historical layers using a sea metaphor:  ‘in the deepest depths is the sluggish movement of water masses that bear everything; above that the tides and swells; and finally at the surface the transient fleck of surf, whipped up and gone in a minute’.

As I sit here in São Paulo, on the eve of NETmundial, I find myself imagining what Braudel might have said, had he been tasked with giving the academic keynote address.

He might have started his speech with some cynical comment about declaiming the ‘uniqueness’ of the Internet and our time. He would probably diagnose this as chrono-narcissism, an obsession with the here and now, typically heard in arguments that the Internet has departed from anything we have experienced in history.[6] He may well then have pointed out that humanity has passed through many such moments with the telegraph, the telephone, radio, TV, airplanes, and, as is typical, the initial excitement about this new technology has been followed by disillusionment and, after some time, its mainstreaming into the routine of society.

Then Braudel would have turned to the notion that the Internet has brought an end to geography,[7] a notion that has been fashionable since the birth of the Internet. The end of geography was often linked to ‘end of state’ argument. In his Declaration of the Independence of Cyberspace in 1996, John Perry Barlow (co-founder of the Electronic Frontier Foundation) wrote that there is no state sovereignty in cyberspace, that states do not posses ‘any methods of enforcement’ and that ‘Cyberspace does not lie within your (state’s) borders’.[8] Barlow’s declaration represents the predominant view of the mid-1990s. But what has happened in the meantime? Not only has the Internet not made geography obsolete, but, with geolocation applications, we are more anchored in geography now than we were in the pre-Internet era. Braudel, who based his long-term history on the high relevance of geography, might now have smiled placidly, recognising that he had been proven correct. 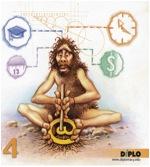 But, on this point Braudel’s insights may need to be updated. Apart from geographical constraints, ‘the future history of the Internet’ will be increasingly shaped by our biological constraints. While we are impressed by the advancement of humanity in acquiring new knowledge and understanding, we often forget that certain biological limitations have not changed since the early days of humanity: our working memory, our need for sleep, our capacity to maintain social contacts. In addition, the Internet has not put an end to any core human traits like hope, fear, or love. On the contrary, the Internet industry uses them as the basis for its business model as evidenced by the importance of Facebook likes for human need for social acceptance.

When it comes to biology, we are not that different from our Neanderthal or Cro-Magnon predecessor. Biological long durée matters even more for IG than for its geographical counterpart. The Internet’s growth and tools of growth (e.g. Google Glass) are facing the limits of what users can absorb at any given time.  Just like our predecessors, we, too, live in 24-hour days (even if they did not measure them). We can handle eight pieces of information in our working memory (a key for innovation and creativity). And we can maintain maximum of 148 stable social contacts, as proposed by British anthropologist Robin Dunbar and known as Dunbar’s number.

Currently, we are seeing a massive re-allocation of our time from offline to the online realm. This online time-conquest can be seen everywhere. According to OECD statistics, more than 20% of family interaction happens online.  When the remaining free time is conquered, the Internet is likely to face our biological limit to process information and concepts. It will be also an important limit for the Internet industry, which depends on the active attention of Internet users.

But back to Braudel and his imaginary speech. After setting the broader stage, he would now most likely have zoomed in on a specific issue. Privacy and data protection are the ‘elephant in the room’ at many IG meetings, including NETmundial. To my mind, Braudel would have placed privacy and data issues on all three levels of his historical analysis. He would have started by pointing out that NETmundial came about as the first major event in the AS (After-Snowden) era. As a matter of fact, based on the analysis of the 188 submissions to the meeting, privacy figures more prominently in NETmundial preparations than, for example, ICANN-related issues, contrary to what was initially expected.

On a Braudelian medium-term level, we notice that privacy has featured prominently, and some echo the message coming from Silicon Valley that privacy is passé.  Braudel would probably have warned that privacy may not be profit-friendly for Internet companies, but that it is still one of the pillars of decent human life. Privacy is not just an invention by the drafters of the UN Declaration on Human Rights (1948), as it is sometimes labelled.

The origins of privacy can be traced back to our need to see and not to be seen, one of the core survival strategies of the human race since our early days on Earth. The more those involved in digital politics see privacy in this broader historical context, the more sustainable the future of IG will be. Even for Internet companies, more privacy may not make shareholders happy, but it will provide a much more solid basis for a sustainable Internet business model.

As a witness of a bloody twentieth century (he finished writing his capital work on the Mediterranean as a prisoner of war in Germany), Braudel was fully aware of the risks of naïve techno-enthusiasm, something we can find reflected in modern digital lingo: Give us enough computer power and we can solve social problems. One of the deeper philosophical causes of the brutalities of the twentieth century was an attempt to address social problems by taking a techno-scientific approach. Societies were seen as mechanical systems that could be managed by formal scientific methods. As we learnt to our cost, millions of people were killed for opposing being part of the ‘grand design’ or not accepting that they could be made ‘happy’ according to various ideological definitions.

Today, the situation is better. We have historical experience, policy safety mechanisms, and a more realistic idea of where sophisticated computer models can help society. Still, Braudel would have warned us about the risk that somebody, somewhere, may be excited about the power of computers and could start modelling human reality towards some new ‘grand design’.

Just as he turned to zoom in further on the immediate history of IG events and the role of our contemporaries, Braudel would have been told by the chairman to shorten his speech. Not even he would be allowed to run over time. You may guess what he would have said…..

[1] For example, at the first IGF back in 2006, the link with venue was the dialogue from Plato’s  The Phaedrus between Teuth (the god who invented numbers and arithmetic and geometry and astronomy, also draughts and dice, and, most important of all, letters) and King Thamus. The argument echoed discussions between techno-optimists and the skeptics of our time.

[2] Fernand Braudel was among a group of eminent foreign professors who worked at the nucleus of the University of São Paulo: the School of Philosophy, Sciences and Languages. During his stay in São Paulo (1935–1938) Braudel did the major initial work on his main scientific contribution and one of the most important historical books of the modern era:  The Mediterranean and the Mediterranean World in the Age of Philipp II.

[3] In Braudel’s writing and voluminous literature on the causes of WWI (one of the most researched historical topics), there is no serious analysis of the importance of the (mis)use of the telegraph in the outbreak of War. Currently, I am conducting comparative research of the impact of technology in two periods: 1990–1914 (telegraph) and 2000–2014 (Internet). The results of this research will be presented at the Geneva Internet Platform (GIP) seminar on 1 July 2014.

[4] The Annales School was established by Lucien Febvre and March Bloch in 1929 around the journal Annales d’Histoire Economique et Sociale.

[5] In the 1950s, Braudel tried to reform the teaching of history in France by focusing on a deeper understanding of the social currents that shaped the history instead of just memorising dates and names of kings. His attempts at reform faced strong resistance by both teachers and parents and ultimately failed.

[8] The original e-mail with the full text of the declaration is available at .

When do negotiations start?

Watch out for the wording: a NETmundial vocabularyDay 1 at NETmundial: Rejecting mass surveillance, fostering net neutrality
Scroll to top