You are here: Home1 / Webinar Digest: Digital policy in the age of augmented reality

Webinar Digest: Digital policy in the age of augmented reality

Building on the example of the Pokémon Go phenomenon, the webinar discussed the challenges and opportunities of augmented reality. Daniel Rosen Jacobson, Industry Manager of Apps & Gaming Partnerships at Google, the main speaker of the webinar, explained the background to Pokémon Go and the reasons for its success. An effective mixture of Pokémon’s fan base, a ‘community’-effect, and the possibility of augmented reality to bring the Pokémon world to life, culminated in the game’s extreme successes within the first weeks of its launch.

Next, Mr Rosen Jacobson introduced the basics of both augmented and virtual reality (VR), and Google’s Daydream project, which is able to transport users into virtual worlds. He showed how augmented reality can be used to better understand your environment; for example through the ability to measure spaces before buying furniture, or to find items in the supermarket.

The speaker’s presentation sparked a lively debate among the online participants. Many were concerned with privacy and data protection, such as the the way in which images – captured by AR – are treated. Others brainstormed about the applications of AR and VR in education. Furthermore, based on the Pokémon Go experience, concerns arose about the game’s interaction with private property, and other locations where it might not be beneficial to gather a large group of gamers (e.g. in hospitals).

After this discussion, Dr Jovan Kurbalija, Director of DiploFoundation and Head of the Geneva Internet Platform, shared his thoughts on the Pokémon Go phenomenon, especially related to the increased interplay between offline and online environments. Whereas the Internet has generated the idea of ‘the end of geography’, Dr Kurbalija showed that geography is more relevant than ever, evidenced by the difficulty of distinguishing between the virtual and the physical, and by the current importance of geo-location, which anchors all users in their physical locations.

Finally, Barbara Rosen Jacobson, DiploFoundation’s Research & Project Associate, and a Curator for the GIP Digital Watch observatory, presented research conducted by the GIP which explores the policy dimensions of Pokémon Go and augmented reality across a number of digital fields, including infrastructure, security, economics and development.

The webinar made clear that even though Pokémon Go might just have been a summer hype, it provides a window into both the possibilities and the concerns related to augmented reality. It is difficult to predict the future, but it is evident that augmented and virtual reality can profoundly affect it.

The recording fo the webinar, and the presentation slides are now available 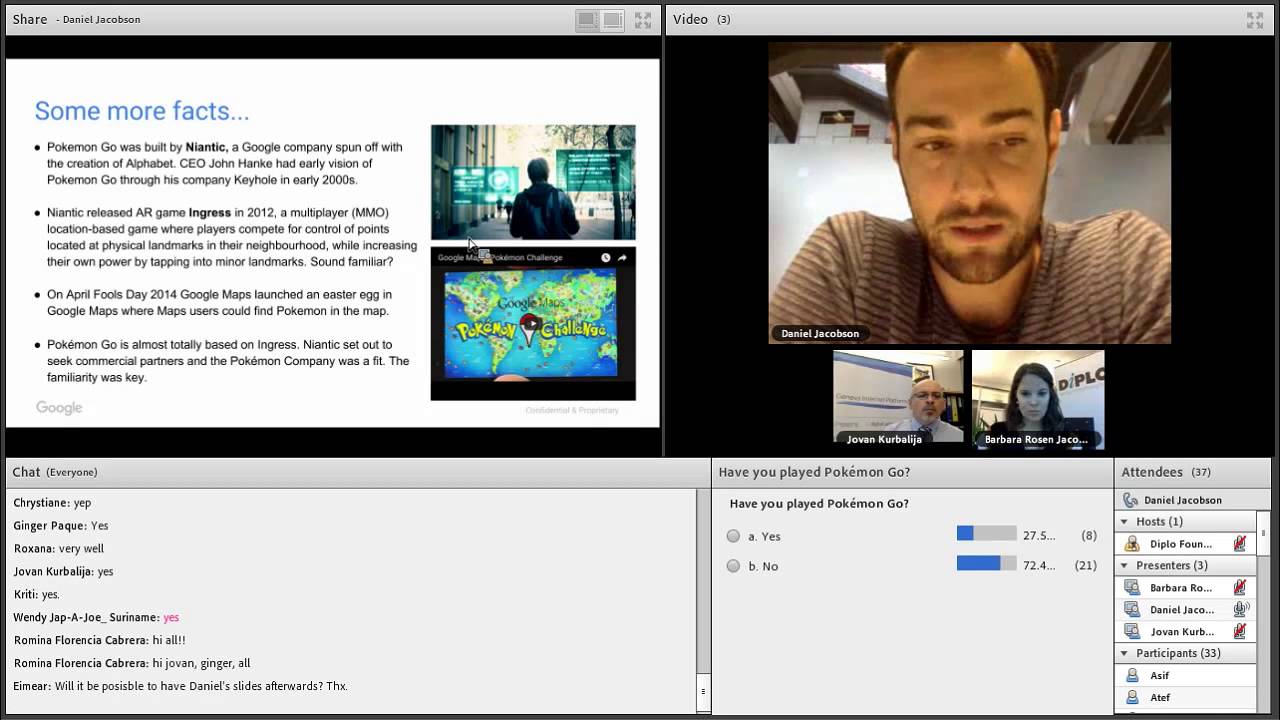 The IANA stewardship transition: what is happening? (Part II)E-commerce in the WTO: the next arena of Internet policy discussions?
Scroll to top