You are here: Home1 / Is there a “public interest”?

Is there a “public interest”?

Jovan has asked me to reflect on how to determine the “public interest”. As a lazy skeptic I’ve shied away from the subject. It is at the crossroads of epistemology, chaos theory, political science, and consciousness – and much more. I feel like the old man in the movie: The Pink Panther. It is night, and the Pink Panther jewel has just been stolen from Princess Dalah’s villa. A bevvy of blaring cars rushes about in hot pursuit of the villain. Their frenzied paths all cross in a venerable square: out of the night cars emerge, and rush into the darkness at the other end under the bemused eyes of old man who is trying to cross in order to go home after the bar has closed. As the cars all crunch up on a pile of smoking metal, blaring away in impotent urgency, as the old man dodders back to the chair in front of the bar. Such is life in the world of “the truth”.

Put it another way: the blog entries are no more than the chattering guide’s comment to your visit to the Disneyland of public philosophy…. 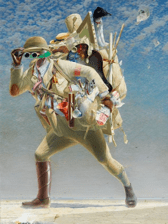 Is there an objective and true “public interest”? – this is the first thing one ought to discuss upon undertaking such a quixotic quest.

Plato (and goodly part of Western philosophy) argues that there is a public interest, which is –as all truth – transcendent. Transcendent means “perfect and eternal” – out there in the distant world of ideas – and therefore unchanging while contingent reality changes. It is incumbent upon the philosopher to seek the truth.

Other philosophies – in particular Asian ones – would also argue for true, albeit immanent public interest. Such truth unfolds in time, forever evolving and changing – but revealing itself. The dialectic of yin and yang yields chi – the “spirit” or the “way” – which is harmonious. Here the philosopher observes (and at best facilitates) the emergent truth.

Unchanging perfection or harmony – both worldviews converge in the belief that there is order underlying the chaotic disorder we observe on a daily basis. The only question is whether this order is static or dynamic. Either way, both worldviews provide legitimacy for authority (be it personal or traditional).

In Plato’s worldview error – sin – is confirmation of distance between reality and ideal. In the Asian worldview error is betrayal of the mandate to seek harmony – leading to “loss of face”[1] – and then “loss of mandate”. In the West “original sin” is at the beginning, in Asia it is “impending”.

In both cultures visual art provide metaphors for the respective worldviews. Western paintings are “windows” on reality[2]. Standing before (and away from) the painting the observer perceives the truth – the artist being the philosopher who has traced the path. The vanishing point, which organizes the painting’s perspective, is the ordering truth[3].

Asian painting invites the observer to enter into reality[4] and partake of the revelation of the truth. In many such paintings there is even a small human form, to which our gaze is mysteriously attracted, and we feel like joining.

Adam Smith and the “Vienna School” of philosophy implicitly build a synthesis between the two worldviews. They observe the “invisible hand” at work, which emerges from human interactions – it is also an immanent reality. On this emergent property they bestow transcendent “harmony” – attempts to meddle with the “invisible hand” are counterproductive and doomed. So the “public interest” is both affirmed and denied – it exists, but is beyond reach.

These worldviews posit a global framework – they aim to present a coherent and consistent view of reality. At the same time they place themselves at a distance from reality as we experience it. The empiricist’s uneasiness with worldviews, which start from “first principles”, lingers on.

There is a more modest empirical worldview – consequentialism – which sees reality as “evolving through local modification”. Life is contingent and chaotic. At any point in time humanity can modify it – by trial and error, for we have no a priori way of determining the direction of the modification – to achieve what it perceives as an improvement over the previous condition. Such change might be justified – but accumulation of such changes does not necessarily lead to progress. An analogy would be to observe that as hippos mutate into wales one cannot say that the outcome is in any way “better” or closer to an ideal, or harmony.

The fundamental difference now becomes evident. Authority is dethroned and becomes the contingent outcome. “Public interest” is nothing more than the will of the participants as expressed at any point in time – subjective “will” of the public.

“Will” is neither unfettered nor perfect – it is not Nietzschean. It is subject to all sorts of constraining conditions ranging from the imperfection of the human brain to our being embedded in our social system. Authority is dethroned and replaced by “good enough” and “best efforts”. Not much to go on – so we should use it lightly, with lots of modesty, and more than a touch of self-deprecating irony.

It has not escaped my slothful attention that the consequentialist point of view – I would hardly call it “worldview” – could dispense with much metaphysical rumination. Pass Occam’s Razor, please.

Uber car crash: limits of autonomy and questions of responsibility

IGF Azerbaijan dates (it’s not 6-9 November in Baku)GUEST BLOG: How the USA is using e-diplomacy
Scroll to top