You are here: Home1 / Techplomacy in the US California Bay Area

The tech industry of the US California Bay Area has an unprecedented impact on the digital world. In addition to the technological advancements, it affects the economy, policy, and society, and engages with people worldwide. Technology is becoming synonymous with issues of security, protection of human rights of citizens, ensuring the stability of the future development of individual nation states by staying on the forefront of technological advancement, and anticipating its policy implications. Many states have therefore targeted diplomatic efforts to approach the Bay Area tech industry. 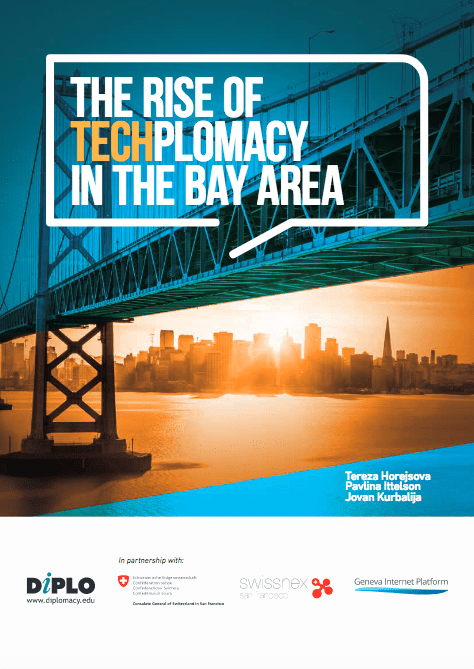 Diplo and the Geneva Internet Platform, partnering with the Consulate General of Switzerland in San Francisco and swissnex San Francisco, have conducted research on how states deal with the Bay Area tech industry and how the practice of traditional diplomacy is challenged in this setting. We expected to see how interactions between the states and companies contribute to policy shaping, but it became clear that the main presence of states in the Bay Area is limited to economic, investment-driven diplomacy. However, our research showed innovative and unconventional types of diplomatic representation and practice – such as the Office of the Tech Ambassador of Denmark, having a global mandate to interact with the tech industry, unconventional forms of consulates where either the whole consulate or a part of it is acting as an innovation center to better promote startups and strike up a conversation with the tech industry, or a branch of government (other than its diplomatic representation) specifically dedicated to the tech industry in the Bay Area.

These innovative approaches were adopted partly due to the fast-paced, unique Bay Area entrepreneurial ecosystem and partly due to the issues that states address in this setting – such as data, blockchain, urban mobility, AI, IoT, and live sciences, as well as the future impact of new technologies on the stability and prosperity of the state. Another trend which came to light was an increased specialisation in the field of diplomacy, mimicking specialisations in the tech sector. In some cases, states choose to specialise in one or two areas – such as renewable energy, AI, or cybersecurity – to gain an advantage.

The findings were compiled in a report which was launched on 12 April 2018 at the premises of swissnex at Pier 17, in the presence of government representatives from around the world presenting their models of tech diplomacy.

The full report can be found online at www.diplomacy.edu/bayarea

Pavlina Ittelson (LL.M) is an international business attorney by profession and one of the authors of Diplo’s Bay Area study.

’37 people are waiting for you to confirm their friend requests’

Cyber conflicts discussed in Tallinn: some takeaways from the 9th CyCon