This text is based on excerpts from the lectures on Evolution of Diplomacy and Technology delivered by Dr Jovan Kurbalija. For quotes, you can contact the author at jovank@diplomacy.edu 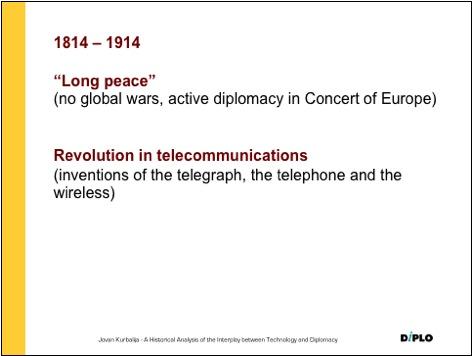 On the diplomatic side, the ‘long peace’ was initiated by the Congress of Vienna (1814), which introduced the Concert of Europe as the way to deal with international crises. The Concert of Europe was characterised by frequent and lengthy meetings. ‘Between 1822 and 1913 there were twenty-six conferences attended by representatives of all the great powers – the last of which, in London, lasted nearly eight months; and many more at which two or more great powers reached agreement.’[1]

The Concert of Europe faced serious challenges, especially in the second half of the nineteenth century. New technology, new methods of agricultural and industrial production, construction, transportation, and communication, as well as new methods of raising capital to finance economic enterprise, and a multitude of other innovations were transforming European society and were soon to begin transforming the societies of much of the rest of the world, more radically and at a faster pace than ever before in the course of recorded history.[2]

‘The forces of economic, social [and, for our purpose, above all technological] change exerted immense pressure for political change [for which, however, statesmen and diplomats were unprepared], and fostered the development of [various] political ideologies and programmes to meet the needs and aspirations of a changing society. Pre-eminent among these [was] the doctrine of nationalism [which was inherited from Napoleonic France, but which “infected” not only smaller powers but also the great powers in the late nineteenth and early twentieth centuries].’[3]

The economic and geo-strategic importance of communication technology started influencing decision-makers. Both diplomats and the military had to adjust their methods to the changing internal and international operational environment. In a way, they faced many of the same challenges that modern diplomacy faces with the development of the Internet.

New technological tools also introduced new challenges. Urgency led to the problem of coordinating communication. Very often, telegrams would arrive in the wrong order, creating considerable confusion with important consequences, as was the case prior to the First World War. During a delicate exchange on the Alabama dispute, the US Foreign Secretary, Granville, warned his counterpart, the British Prime Minister, Gladstone, of this risk: ‘This telegraphing work is despairing. It will be a mercy if we do not get into some confusion.’[4] The rush for new inventions marked the whole of the nineteenth century. Towards the end of the century, the scientific frontier became wireless communication. How controversial this invention was can be gathered from the fact that the five great encyclopaedias attributed the invention of wireless communication to five different sources: German – Hertz, Russian – Popov, Italian – Marconi, French – Branly, and British – Lodge.[5]

James Maxwell (Britain) and Heinrich Hertz (Germany) established the scientific basis for electromagnetic waves. Maxwell provided the theoretical basis which Hertz confirmed through experiment. Their scientific discovery was used for subsequent inventions in the field of wireless communication, starting with wireless telegraphy, through wireless telephony, and concluding with radio broadcasting. Spectra were introduced as new communication media alongside existing cable communication.

Among inventors, Nikola Tesla was particularly noticeable for designing both emitters and receptors of electromagnetic waves. He used the term ‘wireless telegraphy’. ‘Radio’ as a term appeared only after the First World War. Tesla had also designed a technical solution for transmitting power wireless.

Without the inventions of Indian professor Jagadis Chandra Bose from Calcutta Marconi’s inventions wouldn’t have been possible (although Marconi never acknowledged that he used Bose’s inventions).

Capitalising on the previously described theoretical inventions, Italian scientist Guillermo Marconi invented a wireless communication device.[6] In 1897, he registered a patent on his wireless telegraph. In addition to his invention, Marconi had other advantages and talents that helped him to disseminate this device. He had family ties, and later on business links with Great Britain, the world leader in telecommunications at the end of the nineteenth century. His marketing and public relations talents helped him to secure a few lucrative deals with the British Admiralty and British shipping companies. As the table in this slide shows, the main communication players were the UK and the USA, who between them ran 70% of global telegraph cable system. The wireless telegraph provided other countries, mainly Germany and France, with the technical possibility of developing alternative communication systems. This was particularly important to Germany, whose geographic position and late start in the cable race meant that it was seriously disadvantaged when it came to global communication.

A very weak cable-based communication infrastructure could not match Germany’s increasing geo-strategic ambitions. The German government made a concentrated effort to support research and development in the field of wireless communication. In 1903, two pioneering producers of wireless telegraphy sets, Slabo-Arco-AEG and Braun-Siemens-Halske, merged under government pressure into a new company, Telefunken. In an attempt to exploit his invention to the maximum, Marconi established a monopoly by not allowing operators using Marconi’s system to communicate with radio operatus by other companies (mainly German ones). In order to challenge Marconi’s emerging international monopoly in the field of wireless telegraphy, Germany used diplomacy at two international telecommunication conferences (1903 and 1906).  Although the majority of countries were against Marconi’s monopoly, the objections of Great Britain and Italy kept the status quo till 1912 by not forcing Marconi to make his system interoperable with other producers.

The sinking of the Titanic changed this situation and created a moment of far-reaching consequences for radiocommunication policy that still affects us today. Namely, one of the reasons why more passengers from the Titanic were not saved was that the nearby ship, the Californian, (five miles from the Titanic) did not receive the distress radio signal from the Titanic. The first ship that came to save the passengers was the Carpathia, which was 45 miles away. The complete truth as to why the Californian did not react faster went down with the Titanic. There were quite a few potential interpretations, however:

‘There were two major companies that provided the equipment and operators: The Marconi Company in New York City and Telefunken in Germany. The Titanic was subscribed to Marconi. Shortly before the Titanic set to sea, there was a big flap about exchanging weather and iceberg information between ships, that is, between these two different companies.

So the Marconi Company issued an edict that any operator who “talked” to a Telefunken ship would be immediately relieved of duty upon his return. Telefunken, in turn, issued the same order to their operators. Therefore, at the time of the Titanic, Marconi operators did not talk to Telefunken operators and vice versa for fear of losing their jobs.

This is why the Titanic SOS’s went unanswered by the Californian, a Telefunken ship, which we know now was adrift for the night only miles away. The Carpathia was a Marconi ship, and at midnight when the operator checked his gear following some repairs, he heard the SOS and was able to respond, even though they were some distance away.’[8]

Unlike previous attempts in 1903 and 1906, the International Radiotelegraph Conference held in 1912 ended Marconi’s monopoly by introducing the principle of interconnectivity among radiotelegraph systems.

In addition, the US Federal Communication Commission (FCC), one of the most powerful institutions in the field of telecommunications, was created after the Titanic sank. After picking up some survivors, the Carpathia tried to communicate information about the number of survivors ashore. This was not possible due to the heavy amateur use of the same frequencies. The need for regulation of the airwaves became obvious and the creation of the FCC followed. The radio spectrum is used for electric wireless communication. It is divided into frequencies measured in the unit known as a hertz (Hz0). International rules for the allocation of frequencies were set in 1912. Although the spectrum remains the same, the range of usable frequencies constantly increases with the development of technology. New, especially digital, technology significantly increased the spectrum range.

The access to spectrum frequencies is directly linked to economic activities and the development of wireless technology. For example, economically highly important Wi-Fi technology has been developed in a very tiny frequency range, usually called ‘garbage bands’ (used mainly for devices such as baby monitors and microwave ovens).

Next month, the World Radiocommunication Conference (WRC) will continue this long line in negotiating radio frequencies by trying to balance openness for future innovation and regulation for the protection of public interests.

In the preparation for the WRC 2015 you can join just-in-time course ‘A survival guide for radio-frequency diplomacy’ (27 October 2015)  at the Geneva Internet Platform.

[6] While his scientific and business careers were very successful, Marconi’s excursion into politics and diplomacy was less so. Guided by his love for money and power Marconi joined Mussolini’s movement. He was Mussolini’s roving ambassador, trying to lift the international community’s boycott against Italy.

Other non essential but useful Tools and Services