You are here: Home1 / Privacy issues discussed at CONNECTing the Dots

We followed the second break-out session on privacy (break-out session 7), in which the panellists discussed privacy aspects in relation to legal frameworks, education, and corporate responsibility. 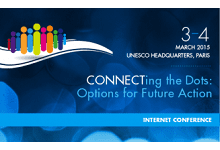 Jean-Philippe Walter, chair of the Consultative Committee of the Data Protection Convention (Convention 108), Council of Europe, referred to the previous session in which speakers had already touched upon a number of related issues. Respect for private life is a right and should be guaranteed to every individual. This right, albeit on the same level as other rights, is a necessary and preliminary indispensable right as a foundation for other rights. It is not an absolute right, as some restrictions are allowed, but any restrictions must meet certain tests for them to be legally acceptable.

Walter emphasised the need to strengthen what already exists, and to create new rights only when this is absolutely required.

He explained that although the legal framework is necessary, it is not enough. We need to flesh this out with an appropriate technological approach. Today, we run the risk that machines and algorithms may be making decisions for us and influencing our choices. Technology should be at the service of man, and not the other way round, he said.

Walter also emphasised the need to improve awareness-raising, education, and training – areas where UNESCO can play an important part. He welcomed the initiative of creating a Special Rapporteur on Privacy.

Sherri Hope Culver, associate professor at Temple University, Philadelphia, shared the findings of a study by the Global Alliance for Partnerships on Media and Information Literacy (GAPMIL), which is directly relevant to the UNESCO draft study on Keystones to Foster Inclusive Knowledge Societies. The GAPMIL study mainly focused on how privacy is being addressed in the classroom. Among the findings was the fact that privacy was being discussed only in a very limited way in classrooms. Also, the higher the degree of the educator, the more likely it is for the educator to discuss privacy-related issues.

Culver also shared recommendations: there needs to be a focus on resources which educators can share in class, as well as on the professional development of educators, with the aim of helping them manage classroom discussions. She also said that further research was needed for increased representation from other regions.

Avri Doria, vice president, Internet Architecture and Governance, questioned the idea that privacy is what most people looked for when using the Internet. For example, she asked: When carrying out online transactions, aren’t online consumers more interested in the security of the transaction itself, rather than the privacy of the information they are sharing?

Doria said there was faith in legal instruments, and stressed that it is not only privacy that is not an absolute right, but that none of the other rights were absolute either. Unfortunately, breaches were occurring when governments used the ‘as necessary’ card to apply restrictions to rights.

She also said that technologists have now realised that threats against privacy are also security threats. As a result, plenty of work is being carried out with regard to the security aspects of privacy, and technologists are working on ways in which they help.

Sizwe Lindelo Snail ka Mtuze, international coordinator, African Centre for Cyberlaw and Cybercrime, said that the right to privacy does not exist only in horizontal relationships (individual to individual), but also in vertical ones (state to individual and vice-versa).

The use of ICTs has brought in new perspectives, as we are no longer concerned only with what happens at home, but also on the Internet and in the cloud.

The privacy and freedom of expression debate is also linked to cybercrime, as we can easily expose ourselves to crime such as identity theft, by sharing our personal data online. In this regard, our online behaviour is linked to threats in the offline world.

Chinmayi Arun, research director, Centre for Communication Governance (CCG), National Law University, identified three areas critical to privacy: that which is related to privacy as a human right, to children, and  to social norms.

Arun also noted that the countries which are most reluctant to discuss privacy are those who believe in the Westphalian system over the multistakeholder model.

She said that although it is less visible and more controversial, privacy needs to be discussed more. In addition, more work needs to be done in relation to children’s rights and online privacy issues. For example, she noted that children who are not of legal age are unable to understand – let alone agree to – terms and conditions set by various websites.

Arun concluded that there are other ways, including soft norms, which can deal with privacy.

Zaid Bouziane, assistant professor at Al Akhawayn University, said that while the Internet amplifies power and empowers users, it also empowers cybercriminals. Governments are reluctant to encourage anonymity, as this carries different risks. UNESCO’s Internet Study attempts to reconcile these, and many other issues.

Bouziane noted that corporate responsibility was missing from the Internet Study. Today, there is too much emphasis on terms and conditions. The reality is that users enjoy the convenience of free services, and in return they are giving away a chunk of their private data. There should be more oversight on the corporate sector, and more transparency and accountability to ensure that this exchange is understood.

With regard to the use of the Internet at the workplace, Bouziane noted that the nature of the Internet has allowed employers to have much more access to employees’ private information. He emphasised the need of using ICTs in a way which is consistent with the legal requirements related to the protection of private data.

The session was moderated by Jochem de Groot, government affairs lead for the Benelux countries at Microsoft. Chris Kabwato, director at Highway Africa, acted as rapporteur.

For more updates from UNESCO’s CONNECTing the Dots conference, follow our event webpage.