You are here: Home1 / Internet governance in February 2019

Hardware making a comeback, new artificial intelligence (AI) initiatives being launched, and intensifying efforts to curb the spread of harmful content were among the main digital policy developments in February 2019.

These and many other developments, trends, and regional updates were covered during February’s just-in-time briefing on Internet governance – our monthly appointment on the last Tuesday of every month – which took place on 25 February 2019. They were also summarised in the Internet Governance Barometer for February, and in Issue 38 of the Geneva Digital Watch newsletter.

The briefing was led by Dr Stephanie Borg Psaila, the interim director of DiploFoundation and the Geneva Internet Platform (GIP). She was joined by Sorina Teleanu, curator of AI for the GIP Digital Watch observatory and Vladimir Radunović, director of cybersecurity and e-diplomacy programmes at DiploFoundation.

Borg Psaila highlighted some of the events held in February 2019, including the 32nd Session of the Assembly of the African Union, Safer Internet Day, and the 40th Session of Human Rights Council. 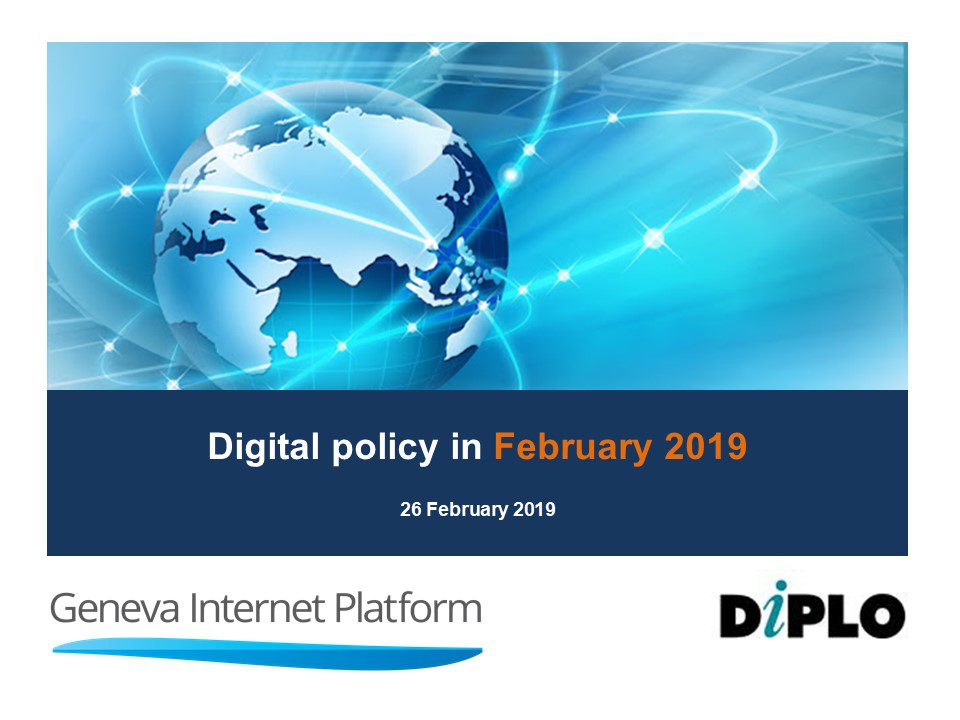 The speakers gave an overview of top trends in digital policy in February.

The next Internet governance briefing is on 26 March. Registrations are open.

Borg Psaila spoke about the upcoming events in March, including the Human Rights Council, the 30th anniversary of the WWW, and the Group of Governmental Experts on Lethal Autonomous Weapons (GGE LAWS).

Dr Borg Psaila then gave an overview of the activities of the Geneva Internet Platform and DiploFoundation in the last week of February, which included a discussion on AI hosted by the EU delegation in Geneva, the 4th Geneva Engage Awards, and the February 2019 newsletter which will be published in the first week of March.

Updates from the Middle East and North Africa were provided by Noha Fathy. Saudi government’s eService app Absher tracks and restricts women’s movement, which has prompted calls to Google and Apple to stop carrying the app. EU proposed AI guidelines could threaten the documentation of war crime evidence in Syria, as YouTube videos on the subject were seen against YouTube guidelines, and taken down by AI technology due to ‘graphic or extremist content’.

Amrita Choudhury gave an overview of digital policy developments in Asia. The Bangladeshi  government has filed a lawsuit against the Philippines for a US$81 million cyber-heist. The Competition Commission of India is reviewing a case over Google’s market dominance. The Indian government proposed to amend the rules governing intermediary liability protections. Sri Lanka announced an electronic identity card (eID) and an electronic passport (ePassport) for citizens later this year. The Korea Communications Standards Commission (KCSC) has obligated all Internet service providers (ISPs) in Korea to filter all server name indication (SNI) requests. A draft legislation by the Nepal government is proposing to impose penalties for ‘improper’ social media posts, raising concerns regarding freedom of speech and stifling dissent.

Andre Edwards provided updates from the Caribbean region. British Virgin Islands will use e-tabulating machines in general elections for the first time. Drones will be used to supervise public construction projects in the Dominican Republic. Jamaica’s Universal Service Fund will focus on establishing more community access points in the country. Jamaican children and seniors were trained on online safety by the FLOW Foundation.