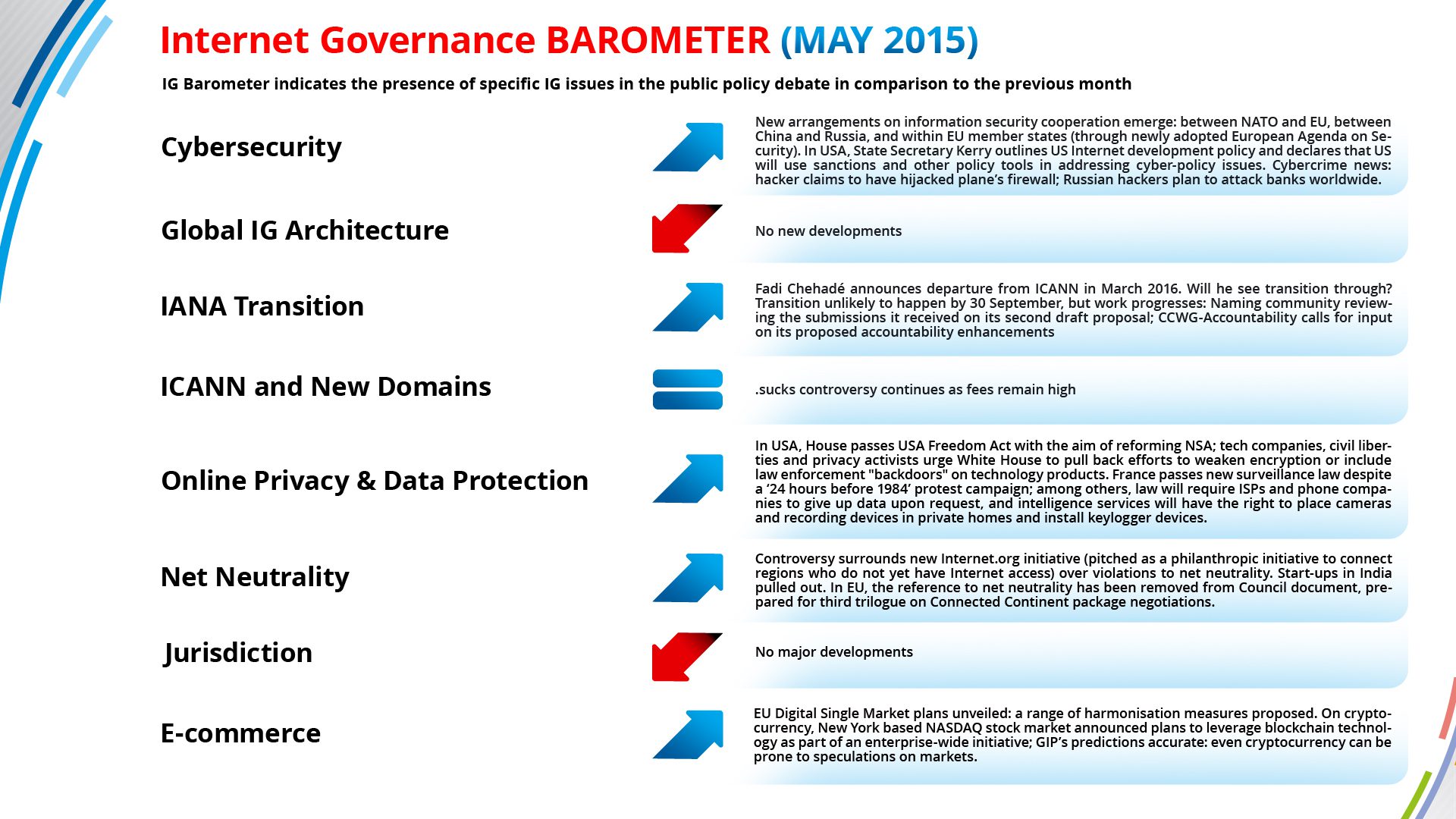 Secondly, the securitisation of digital policy can be observed from May’s developments: US State Secretary John Kerry’s speech in Seoul, the newly adopted European Agenda on Security 2015-2020, and the agreement between Russia and China.

During the briefing – delivered in Geneva by the Geneva Internet Platform, and simultaneously as a webinar for online participants – Kurbalija gave an overview of the main events which took place in May:

For more details and reports, visit the Geneva Internet Platform’s sections on events and past events, or click on the links above.

Cybersecurity has followed an almost constant trend of high relevance in IG and digital policy since the start of the year. In May, a few developments shaped the discussion on information security, including the agreement between NATO and the European Union, the China-Russian cyber non-aggression pact, and the new European Agenda on Security 2015‒2020 focusing on preventing terrorism, fighting organised crime, and fighting cybercrime. In the USA, State Secretary Kerry outlined the country’s policy for cybersecurity, and clearly stated that the USA will use sanctions and other measures in addressing cyber-policy issues. May’s developments took place amid claims that a plane was hijacked by a hacker, and that Russian hackers have indicated plans to attack banks.

At ICANN, the announcement of Fadi Chehadé’s departure in March 2016 left the community speculating about the possible reasons for his premature exit. It remains to be seen how this will affect the transition, which many say will not happen by the 30 September deadline. Meanwhile, the gTLD ‘dot sucks’ controversy continues as registration fees remain high, and concerns about the possible misuse of this domain have emerged.

On privacy and data protection, the US House of Representatives passed the Freedom Act with the aim of reforming the powers of the National Security Agency (NSA). At the same time, US tech companies, and civil liberties and privacy activists have urged the White House to pull back efforts to weaken encryption or include law enforcement backdoors in technology products.

In France, a new surveillance law has made a radical move to authorise authorities to demand data from ISPs and phone companies, and to place cameras and recording devices in private homes. This raised a lot of concern among civil society, who protested with a ‘24-hour before 1984’ campaign, drawing a parallel to George Orwell’s novel.

Net neutrality regained importance due to the newly launched Internet.org – an initiative by Facebook to connect regions who do not yet have Internet access – with the caveat that only a limited number of websites would be accessible. While Indian start-ups pulled out of the initiative, a global campaign to request Internet.org to provide access to the full Internet is under way.

Meanwhile, the topic raised an intensive discussion among webinar participants, who debated whether Internet.org was a commercial product or a philanthropic exercise. On one hand, some argued that half a loaf was better than no bread at all. On the other hand, others raised concern over the restricted bubble of access.

In the EU, the reference to net neutrality was allegedly removed from a leaked Council non-document, which was surprising and goes against recent trends in the region to protect net neutrality.

On e-commerce, the Digital Single Market plans were unveiled in the EU. The plans promise a simple functional approach of removing barriers and harmonising rules, among others. In the USA, New York-based NASDAQ announced plans to leverage blockchain technology as part of an enterprise-wide initiative. The GIP’s predictions were accurate: even cryptocurrency can be prone to speculations on the markets.

In an update from the Multistakeholder Advisory Group meeting, Virginia Paque explained that the aim was to continue the efforts towards the preparations for the IGF 2015 annual meeting, with the priority to finalise the selection of the main/focus sessions and finish the process of workshop proposals evaluation and selection. The chair, Janis Karklins, opened the meeting with an enthusiastic review of the site for this year’s meeting in Joao Pessoa as perhaps the best venue yet for an IGF meeting. The meeting included presentations from the World Economic Forum, the Geneva Internet Policy Observatory (GIPO), the Global Forum on Cyber Expertise (GFCE), and the NETmundial Initiative.

What to expect in June

June will feature a number of upcoming events:

Kurbalija said that we can expect the link between sustainable development and digital policy to strengthen, especially with many WSIS+10-related discussions in May, June, and beyond.

In diplomatic circles, issues which have been diffused so far will now come into focus. The current meetings are testing the waters in terms of spaces for compromise, red lines, and how far will countries go. It remains to be seen how the negotiations will unfold. 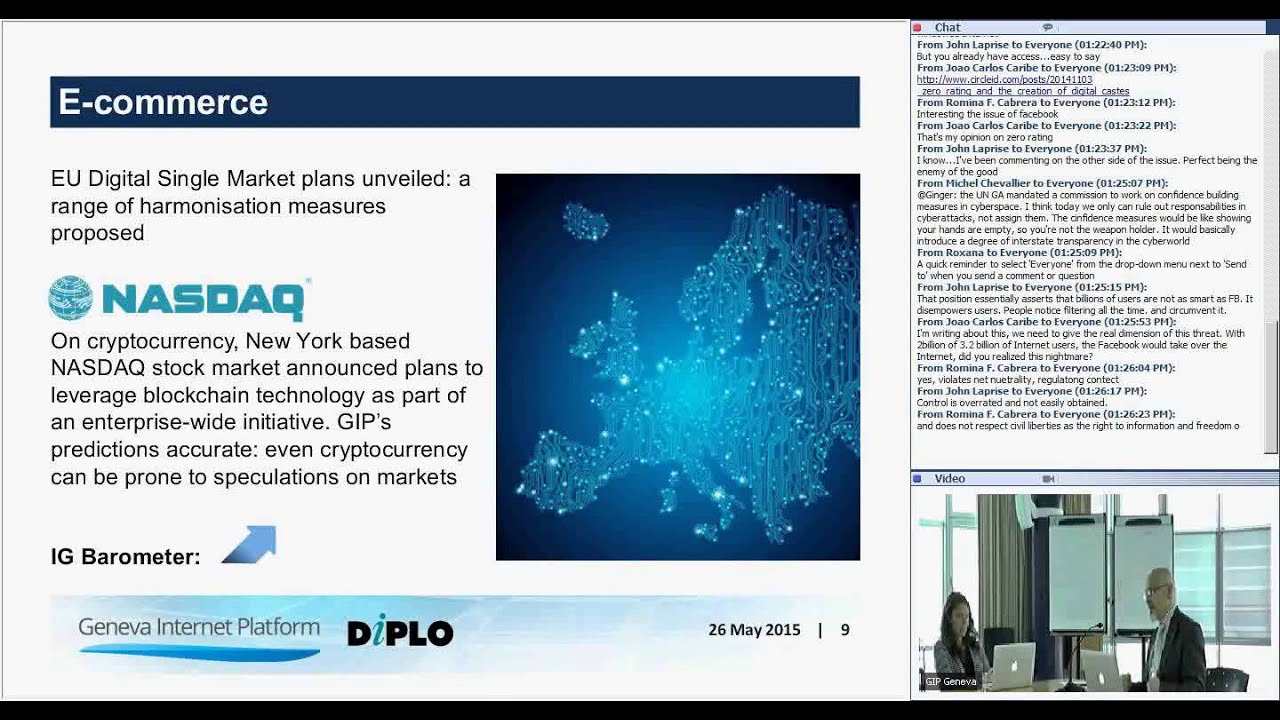 and download the presentation. Join us for the next briefing on 30 June; registrations are now open. The briefing will be delivered live in Geneva, and online for remote participants.

Tattoos – and decisions you may later regret