Diplomats normally write a lot. It is part of their trade. But do they publish? They certainly do since there are at least six Nobel Literature prize winners among them (St John Perse, Pablo Neruda, George Séféris, Ivo Andrić, Czesław Miłosz, Octavio Paz) and maybe more. 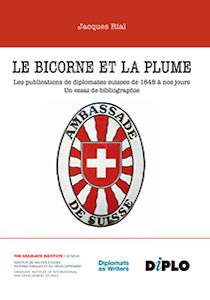 In Switzerland however (as in a few other countries) strict administrative regulations often limit this activity. Nevertheless, Jacques Rial, a retired Swiss diplomat, has looked into the catalogues of the main Swiss libraries and has made some surprising discoveries.

The topic is rather in vogue: DiploFoundation has recently published a first volume devoted to Italian diplomats as writers (Pasquale Baldocci and Stefano Baldi: La penna del diplomatico), which is in its second edition and has already been translated into English. Similar research has now been announced in other countries, especially in Latin America.

Jacques Rial is a retired Swiss career diplomat. In the early sixties he served with the UN in the Congo and later joined the Swiss diplomatic service (1967). After assignments at the Ministry in Berne, then in London and The Hague, he was appointed Ambassador to Cameroon (also accredited to Gabon, Chad, Equatorial Guinea and Sao Tome), then to Uruguay and Paraguay and finally to Croatia. Back at headquarters, he became a negotiator for Switzerland in matters of international refugee policy.

He has published books about Africa and diplomacy. His hobby is sailing: in 1992, he rounded Cape Horn on board a 35-ft yacht.