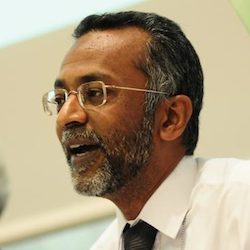 Rashid S. Kaukab is Executive Director, CUTS International Geneva, Switzerland. One of his key responsibilities is to develop, implement and evaluate technical assistance and capacity building projects and programmes for developing and least-developed countries, including on WTO discussions/negotiations. He worked for the government of Pakistan as a field administrator, in the ministry of finance, and as Counsellor on trade and economic issues in Pakistan Mission to the UN/WTO in Geneva before joining the Geneva-based South Centre in March 1998 where he worked as Coordinator of South Centre Work Programme on Trade and Development, as Head, Strategic Policy and Planning, and as Acting Head, Programme and Research Coordination. He has also worked for UNCTAD as a Senior Consultant. Trade and development is the broad area of his interest and he has contributed a number of articles and papers on issues related to trade and development and global economic governance.  He has lectured at several research and academic institutions including Grenoble University, France, CASIN, Geneva, and GC University, Lahore, Pakistan. He is a member Governing Board, and also teaches at the Trade Policy Training Centre in Africa (TRAPCA), Arusha, Tanzania. He holds a Masters Degree in Economics (Karachi University) and Business Administration (Yale University).

Capacity building on e-commerce: From lessons to solutions

Digital policies and trends: Build-up to the Internet Governance Forum