You are here: Home1 / The hole in the fence

The hole in the fence

I am a keen gardener, and during the Covid-19 lockdown I had the great good fortune to be allowed by our neighbour, Janet, to take over the care of her very large, tree-lined, and blissfully quiet garden. The weather was also unusually good, so I spent on average six hours a day working in it through late March, April, and May. I could have wished for nothing more.

The work was interesting, sometimes challenging (especially making sure that the one really tall tree I took down fell in the right place), and gave me great exercise – and peace. Periodically standing back and looking at what I had achieved also gave me immense satisfaction. I had been used to walking rather than driving in the city and, under lockdown guidance for my over-70 age group, could have gone for a walk – for exercise purposes only – every day. But I have never much enjoyed walking without an additional purpose (usually grocery shopping and prowling round charity shops), so didn’t bother. In any case, I got more than enough exercise in the garden, particularly from lifting rocks on the massive rockery to get at bramble and (most difficult) ivy roots, and levering up tree stumps using the one metre long incredibly heavy crowbar I inherited from my father. I’d already had plenty of practice with this in my own garden. (The trick is first to expose the roots with a hand-fork and trowel and then sever as many as possible with an axe.) While digging or winkling out bramble roots and secondary Russian Vine roots with my invaluable stainless steel spade, I took comfort from frequent, if rather one-sided, conversations with a regular companion, a robin – occasionally two when the worms and other insects I brought to the surface were abundant. The only thing that has so far defeated me is the Russian Vine because its root is in another garden. Most of the shroud it has cast over my neighbour’s trees is now dead but the majority of its branches – some thicker than my wrist – resist being pulled out. It astonishes me that this ‘swine of a vine’, which is allied to Japanese Knotweed, is still sold so widely. 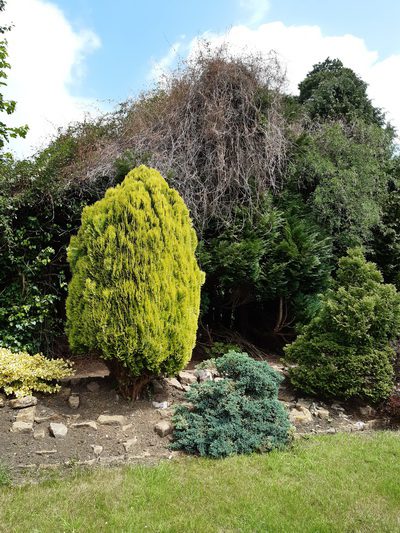 There are still what the military would call mopping up operations to carry out in the garden. As for the summer house, that is getting a new roof shortly, thanks to a friend who is a carpenter. That will be the last stage of its refurbishment because I have already cleared the invasion of ivy, whitewashed the inside walls, scrubbed the sound concrete floor, and repaired and painted the woodwork at the front. I am really looking forward to standing back and admiring the finished product. I love making things work again, whether buildings, furniture – or gardens.

The project also inspired me to write for amusement the following imaginary conversation with an imaginary grandchild:

‘What did you do in the Great Lockdown, grandad?’

‘I rescued the garden of my neighbour, a very old lady who wasn’t very well.’

‘Why did you do that, grandad? Had a bad person captured it?’

‘I asked my own grandad that and he told me the answer: a weed is any plant in the wrong place. The old lady’s garden was full of them and it was a constant source of worry to her. There were brambles, ivy and bindweed everywhere. Sycamore trees had sprung up from seeds blown in by the wind, and one alongside a conifer was about 30 metres tall! Also, there were shrubs and apple trees that hadn’t been pruned for years and were growing into each other. The felt-covered plywood roof of the lovely summer house was disintegrating, ivy had found its way in and was all over the walls, and the paved area in front of the building was covered with at least half an inch of accumulated soil and plants. I didn’t know there were concrete slabs underneath until I slammed into them with my spade! Worst of all, a Russian Vine – or as we usually call it, ‘Mile-a-Minute Plant’ – was completely smothering two massive conifers at the bottom of the garden and had jumped over the path to ….’

‘Did Mr Putin send that, grandad?’

‘Er, well, this was one nasty thing for which we can’t blame him. It gets its name from where it was first found – south east Russia, actually. Anyway, I offered to help because I felt sorry for our neighbour, a very nice lady. She has grown-up children and they did what they could in the garden but, with their other responsibilities, just couldn’t cope with it. Besides, I enjoy gardening. Also, I had time on my hands because being already in my 70s the government of Mr Johnson – you know, the one who was condemned to exile on the island of Mustique at the Corona Virus Crimes Tribunal he arranged to throw blame on the scientists just before the general election in May 2024 – said I was vulnerable to the virus and couldn’t go outside my own home or garden.’

‘So how did you get into next-door’s garden, grandad?’

‘Through a hole in the fence.’

‘Were you smaller then, grandad?’

‘No! Probably a bit bigger – by the time you’ve got to my age, 114, you’ve definitely shrunk a bit. It was actually a fairly large gap that I made by leaving out some of the overlapping feather-edged boards when repairing it.’

‘How can fences be made of feathers, grandad?’

‘Can we move on? By the way, saying that’s a trick I learned from Mr Johnson when he was asked an awkward question. Or he’d say: “The public don’t want to know about that. What they really want to hear about is  …”, and then waffle on about something totally different – always a pack of lies of course. Where was I?’

‘The hole in the fence. Were you allowed to go next door, grandad? Didn’t that Mr Cummings get told off for breaking some rules? I read about him in ‘Horrible Histories’.

‘It was OK because, like him, I was just following my instincts. Also, I was interpreting the rules pragmatically, just like Mr Johnson did in the middle of the Great Pandemic when he changed his mind about erecting barriers to imports from Europe when we left the EU in January 2021. Just as well he did, otherwise we’d all have starved. By the way, you can read about the Great Brexit Debacle in that book I gave you for Christmas – Greatest Political Blunders of the Last 50 Years – it’s Chapter 1.’

‘How did you rescue the garden, grandad?’

‘I armed myself with the right tools and worked systematically from one end to the other, making two piles of rubbish – one of soft stuff that would compost and one of woody stuff plus roots of nasty weeds that would have to go to landfill. I found your great-grandad’s massive crowbar especially useful for getting up tree stumps. It was the sort used for lifting railway sleepers. Of course, you need an axe for that sort of job as well.’

‘Can I have an axe instead of a book for next Christmas, grandad?’

‘Did you close up the hole in the fence when you’d finished, grandad?’

‘Only when Mr Johnson was safely on Mustique.’

This post first appeared on the personal blog of Prof. GR Berridge and is republished here with permission.

Are there circumstances in which one should not help a neighbour in difficulty?