You are here: Home1 / To connect and disconnect: Unraveling the social fabric of the Interne...

To connect and disconnect: Unraveling the social fabric of the Internet

Social life is a complex phenomenon, whether we are looking at offline or online interactions. We identify. We form groups. We sense belonging. We dislike. We exclude. Without evident reasons, we feel connected to some and disconnected to others. As inherent functions of social life, social groups have been created and dismantled. They become coherent and diffuse, as if compressed and decompressed in a continuous accordion play.

This blog post looks at the present moment. The ‘now’ seems to always be defined with depth and distinction. The sentence ‘Today’s world is at a turning point’ is an ironic continuum in history. The past seems like a relatively homogenous and predictable world compared to a future that could include all imaginable possibilities. Although this understanding of the dimension of ‘time’ might be historical, there are suggestions that the advent of the Internet has intensified this perception through its ‘compression of historical time’, as the Internet ‘turns up a perpetual series of anniversaries, disparate moments from disparate epochs, and presents them all as equivalent and accessible in the here and now’ (Davies, 2017, p. 3). Yet, the ‘now’ is just a blip in human existence, and cannot be considered without the age-old insights into the continuity of human nature.

Although our basic instincts, hopes, fears, and identities might not have changed dramatically over the course of time, the world around us is in continuous flux. We absorb our context and transform it into something meaningful, creating public spaces, symbols, objects, and tools. At the present moment, this is the way in which we engage with digital technology (at least, this is speaking about the half of the world that is presently connected on digital devices). The perceived intangibility of the digital realm does not exclude that this space is inherently human and reflects the fears, hopes, identities, and interactions of society, embedded in its users and creators.

A social fragmentation of the Internet?

On the backdrop of the interaction between age-old human characteristics and the brand-new digital technologies of today, we find some interesting phenomena. Most notably, recent discussions about filter bubbles and echo chambers. The increased personalisation of Internet services as search engines or social networking sites plays into our desire for interaction with like-minded individuals, for the confirmation of our pre-existing ideas, and for the occasional encounter with the perfect pair of shoes. Looking into this exciting future of all possibilities, we might ultimately be living in little utopian bubbles, in comfortable digital worlds designed based on our interests and desires. 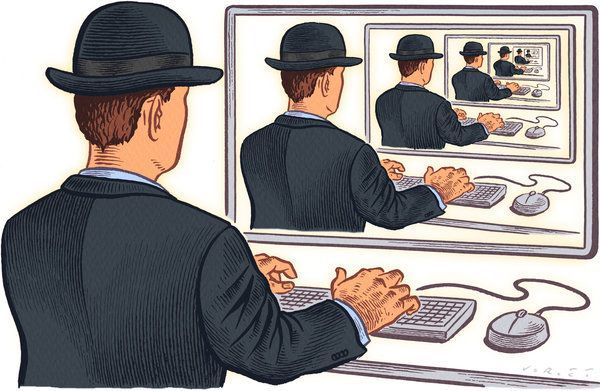 The increased social fragmentation of the Internet (not to be confused with its political fragmentation resulting from policies of censorship and data localisation) has received intense backlash from social scientists and politicians alike, who fear that we are living in an increasingly compartmentalised world, where critical thinking is slowly moving away in the face of extremism and polarisation (see, for example, Merkel’s speech on filter bubbles). But why would we need a critical mind in a perfect bubble where everything makes sense?

Can old sociologists help us with new problems?

One way of looking at online interaction and its consequences for social distance and human connection is through the lens of Georg Simmel’s glasses, to encounter The Stranger (1976). According to Simmel, ‘the stranger’ is

With a peculiar social distance, the stranger is near enough to feel connected, yet still perceived distant and foreign. This ‘unity of nearness and remoteness’ puts the stranger in a unique position. Strangers are perceived as objective, and people let down their inhibitions around them.

By extension, when we connect to physically unknown others on the Internet, we might be encountering Simmel’s strangers. Could this be an explanation of why we seem to speak more openly with our online interlocutors? Could this explain the contradiction between the physical remoteness and the virtual proximity that we sense through online interaction? Is this the hidden engine behind the passionate comments and messages that we often see online?

While the Internet was once perceived as a great ‘connector’ of people, limiting the physical distance of interaction to the distance between you and your screen, there is a growing fear that it might be becoming a great ‘disconnector’. In a world without distance between people, it might have become much easier to draw our own lines around people with the same thoughts into delineated like-minded groups, wherever its group members may be. The dynamics of group formation, including the inclusion and exclusion of the individual, is as applicable online as it is offline (for traditional in-group/out-group theories, refer to Tajfel & Turner (1979)). 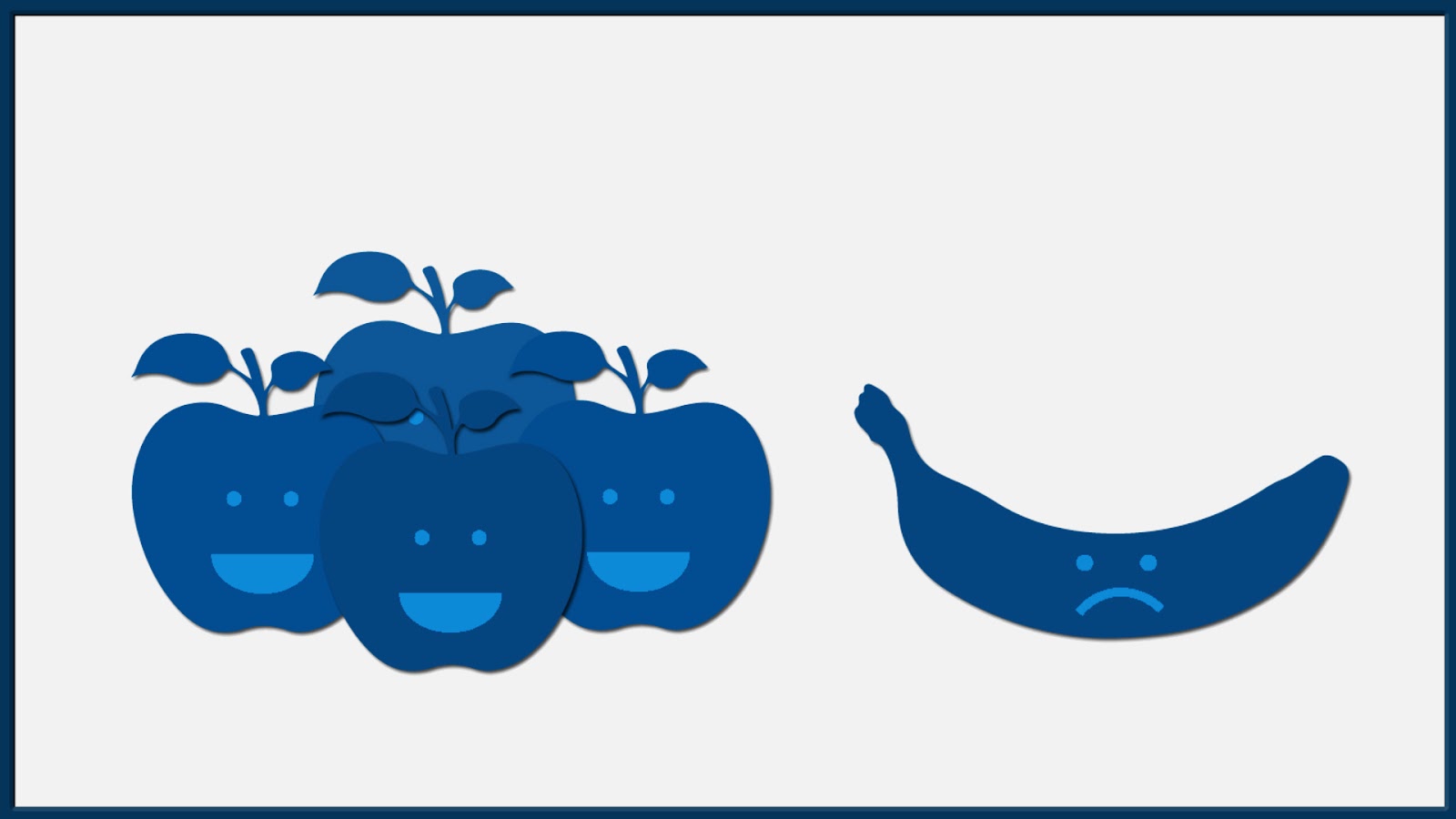 Despite the continuity of group formation, some sociologists have pointed at a changing pattern in the way we identify with others. Throughout most of human history, circles of social identification were rather small, confined to physical spaces where a more or less consistent group of people interacted. These scopes have widened ( Elias, 1987), with urbanisation, industrialisation, and nationalism, to where we have started to identify with others in ‘imagined communities’ – a term used by Benedict Anderson (1991) to analyse nationalism.

The scope of our identification with others has reached so far that we will never physically meet all the members of our group, albeit related to race, class, nation, or religion. But with the advent of digital technologies and the creation of virtual spaces, are these circles of identification expanding to unforeseen dimensions? Maybe this was the hope of those who were expecting the Internet to be a great connector: we merge into one humanity online. This view is now challenged by the reality check that is the filter bubble. Yes, the Internet connects. But it connects us to specific members of the online population; potentially those who are most like ourselves. While the Internet expands the range of options for whom we connect with, seemingly contradictory, this allows us to be more selective in choosing the people we wish to connect with.

One of the often-heard problems of filter bubbles is the idea that we become less empathetic and more hard-line in our opinions as we reduce time spent with people who hold different views. Rather than bubbles that can be punctured, there is a fear of a society locked up in thick-walled compartments. Compartmentalisation can lead to isolation, radicalisation, and disidentification with others (De Swaan, 2014).

No surprise that this digital environment that we are creating has potentially become a breeding place for misinformation and ‘fake news’ – two other age-old developments that have been planted in the greenhouse of digital technology and are growing with an unprecedented velocity into new dimensions. Sensationalist headlines are quickly embraced by an environment that holds the same ideas, and feed the common identity of the group.

From polarity to nuance

Discussions on filter bubbles and compartmentalisation paint a picture of a world without empathy, where we physically live alongside one another without any meaningful connection, all our significant interactions taking place in virtual dimensions with people we agree with, but never meet. Yet, there are a number of nuances that we could distil.

First, we are simply not continuously online. Our lives are tainted by our daily interactions, many of which are still happening in the offline, tangible world. Average time spent on the Internet a day varies from 1 to 5 hours, depending on age and country (We Are Social, 2017).

Second, in our habit to see the ‘now’ as a defining moment in time, we might underestimate the continuity of our behaviour. People have always lived in some sort of bubble. Social compartmentalisation is nothing new. Sensationalism has always tempted the minds of people. The Internet has simply raised (false?) expectations of overcoming compartmentalisation, which might have aggravated our surprise when encountering filter bubbles online.

Third, the openness and transparency of the Internet makes it possible to examine and engage with all kinds of discussion groups, and makes it easier to detect those who engage in online radicalisation or extremism. These discussion groups – in more offline formats – might have always existed, and possibly even at the same scale, yet they might have been obscured. Digital technologies could have enabled social scientists and policymakers to reveal tenants in society that are problematic, but not necessarily new.

This nuanced view is supported by a study done by three researchers at Oxford University on Filter Bubbles, Echo Chambers, and Online News Consumption. Their research found evidence for both an increase and a decrease in ideological distance between individuals, and concludes that, ultimately, the significance of the filter bubble and the echo chamber is ‘relatively modest’ (Flaxman et al., 2016).

In sum, today’s world could be at a true turning point. Yet, we need to take a closer look at the nuances that might mitigate the ‘disruptiveness’ of digital technology and challenge our habit of distinguishing the ‘now’ from the past. Yes, digital technology undoubtedly profoundly changes the context in which we live, but society might adapt to this environment as it has adapted to developments before.

This doesn’t mean that we need to be idle in the face of our transforming context. On the contrary, there has always been a crucial need to counter radicalisation, misinformation, sensationalism, and disconnection and to promote harmonisation, fact-checking, nuance, and connection. The key might not be found in new inventions or algorithms, which will come and go. The key might rather be found in education and social policies that promote constructive encounters and engagement with others.

Brussels launch up close, from a distance