Cohesion within a group of monkeys is maintained through reciprocal grooming. Studies of captive monkeys have shown that grooming makes them more relaxed, reducing their heart rate as well as other external signs of stress. They sometimes become so relaxed that they fall asleep. In fact, we now know that grooming stimulates the production of the body’s natural opiates, the endorphins; in effect, being groomed produces mildly narcotic effects. 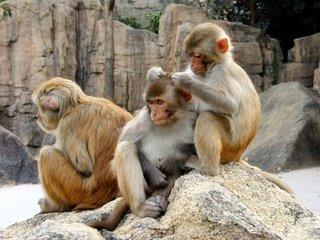 There is a limit to the time one can spend on grooming – this limit caps the size of ape bands to about 50 animals. Humans needed bigger numbers to survive. Language – gossip as mental grooming – may have evolved as replacement for physical grooming: it allowed bands to swell to 150 or so, when the size of the neo-cortex kicks in to limit group size.

Most of our intercourse is casual (and tediously trivial) gossip  – witter – but some it might be useful in different ways. One of the hypotheses is that gossip may have evolved as “a mechanism for controlling the activities of free-riders. By exchanging information on their activities, humans are able to use language both to gain advanced warning of social cheats and to shame them into conforming to accepted social standards when they do misbehave. This is a powerful mechanism for deterring cheats, and researchers were able to show mathematically that free riders would be less successful in a community of gossiping co-operators. Perhaps language evolved not so much to keep track of your friends and acquaintances as to keep track of free-riders and coerce them into conforming. There is, in fact, some experimental evidence to support this suggestion.”

Twitter may be seen as the virtual avatar of gossip – and this seems to be borne out by its humdrum content. Just as gossip, Twitter may also be used to out “social cheats and to shame them into conforming to accepted social standards when they do misbehave.” Recent experience seems to bear out this possible function.

There is one problem with gossip – it is “cold”. Unlike grooming it does not stimulate endogenous opiates. This applies even more to Twitter, where the gossip is “at a distance”.

Smiling and laughter have a property few people know about: they are both particularly good at stimulating the production of endogenous opiates all round. “So the best recipe for happiness in life is to smile as much as possible – thanks to the surge of opiates flooding through your veins, it makes you feel warm and contented.” (Kindle Locations 2942-2943).

It is smiling and laughter that does the bonding – not the words. This makes even more sense when we consider that “as much as two-thirds of the meaning in the sentences we utter is in fact conveyed in the nonverbal signals that accompany speech.” (Kindle Locations 2862-2863). Adding smiles and emoticons is poor replacement for a living smile – I don’t know whether studies have already determined how much endogenous opiates a well-chosen emoticon releases.

All this is of course just a plausible story – whose main purpose is to amuse. Yet it may help in understanding the strengths and limits of Twitter. If bonding occurs, it emerges not from the text itself, but from the “network effect” of the text being retransmitted. Content matters little. On the other hand it serves the purpose of “outing” misbehavior admirably. But it is a negative force – I’d compared it in my earlier blog 164 (https://bit.ly/PZdolc) to a graffiti.

Here a fleeting commentary. Of course we are more than apes: culture has entered the fray next to nature in ways we cannot fathom, let alone untangle. The “scars of evolution” are with us, however. We may think that we have invented something utterly unprecedented, when we have just created the virtual version of an age-old behavior. Such scars have a “mind of their own” and we may be enchanted or angered by their surprising evolution.

Don’t blame the e-Messenger – 192Happy Birthday Diplo! And the next 10 years?
Scroll to top