For the reflective man

Is the creation simply a circle of greed?

The ocean is certainly not agitated

By fish flashing about

In 1706, the Numunu moved from the west to the dominant continental grasslands east of the Continental Divide of North America, seeking a new “way of life” around the emerging ecological triad of grasses, bison, and horses. These foragers on foot were few in number. They adopted and adapted to the horse, quickly developing specialized mounted bison-hunting as their “new lifestyle”. They also profited from European technology trickling into the prairies: guns and iron tools. Henceforth they called themselves Comanche. For more than 150 years, the Comanche dominated an area of well over 100’000 square miles ranging from the Arkansas river to the north to well into today New Mexico and Texas. Their lifestyle became dominant.[1] 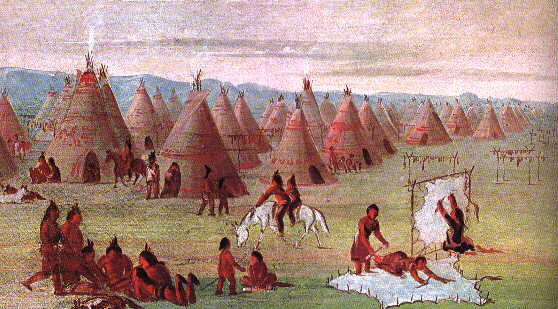 Writing extensively on the subject, the author called the emergence of Comancheria “a momentous cultural experiment”. “Momentous” it certainly was; an “experiment” it was as well. I doubt that it was “cultural”. The core population was too small to qualify as “culture”. It was at best a “way of life”. I’d rather call it a business, or even a racket.

Specialized hunters trade part of their meat for grain they need to obtain a balanced diet.[2] Based on smooth reciprocity, this process is on the whole peaceful. The presence of the horse marred the sudden encounter between the emerging Comanche and the semi-sedentary Apache. The horse enabled the Comanche to raid the Apache for food, horses, and captives. Raiding became a way of life for the Comanche. Location determined the rest: Comancheria was sandwiched between pre-industrial New Spain and Louisiana (later the emergent USA). Raiding these territories became a fast growing business, as the Comanche exchanged horses, mules, skins and captives against guns and other artifacts.

The horse was the centerpiece of the business. The Comanche bred part of the herd on the range; youth tended it. They stole the rest from the settled areas: in particular they stole mules, which fetched better prices than horses among American settlers. Buffalo skins were easy to procure but hard to process: this was women’s job, together with curing buffalo meat for the winter. A man with many horses and many women was a rich man. He could command a large extended family that was tributary to him. Polygyny and slavery emerged. Climate and disease were limiting factors to the business expansion. The Comanche never got to be over 40’000 in total, and this only thanks to ruthless miscegenation with captives.

Comanche, who had started from a handful people, probably were never able to develop more than core behavior patterns involved with gaining a living, along to the social behaviors that are basic to such an enterprise. Raiding was highly hierarchical. The successful band leader got the best pick. A leader was expected to show conspicuous generosity, but in this system of primitive accumulation generosity translated into political power and further accumulation of wealth.

All young people started out as hired hands riding their chief’s horses. Personal achievement was everything, and status was not fixed, but forever contestable. According to custom, youth had to pay bride price. Their access to women and wealth depended on raiding exploits: “Excluded from marriage, horseless and horse-poor young men found their route to full social enfranchisement severely compromised” (pg. 264).

“The dual nature of Comanche society, its deepening segmentation and its persistent plasticity fueled fierce social competition.” (pg. 165) Comanche men were culturally conditioned to be ambitious, aggressive, and competitive. “… it was not because they were inherently violent, but because they were desperate to cross the social fault lines from bachelorship to marriage, poverty to prosperity, and drudgery to leisure.” (pg. 269) The great losers in this social system were women, whose standing in the community plummeted to that of menial labor, and slaves or quasi-slaves, who did most chores. For most Comanche, life was brutish and short.

The encounter with the horse transformed the Comanche into proto-capitalists, whose main (if not only) business was raiding – exploitation of neighboring societies. In this sense the “business model” was “parasitic” on the emergent US society and collapsed soon after incorporation into US territory. It is doubtful that such a “business model” would have been capable of evolving into a stable social system.

The capitalist development model has brought enormous progress, but also increasing inequality.[3] Today, an esoteric financial system spearheads development. To the extent that the latter is not a “speculative bubble”, one might discern some similitude to Comanche raiding.

Beyond the issue of justice and morality the issue is one of stability of a social system based on ruthless accumulation as well as stark up/down mobility. Human societies have emerged from the Holocene with rather strong anti-hierarchical traits.[4] Shaming and, as the last resort, killing enforced these traits (particularly of the alpha-bully). Complex societies would seem to favor egalitarian attitudes. One wonders about current trends toward deepening segmentation and persistent plasticity, which fuels fierce social competition.

Persuasion, the essence of diplomacy (report from the event)“Climate change refugees” a misleading analogy
Scroll to top