You are here: Home1 / Walking the rickety bridge of analogy – please don’t swing it while I’m...

Katharina has led me to a deep gorge over the chasm of reality, shown me a rickety set of loose planks hanging from frayed ropes, and asked me to walk it across. As fellow donkey on the quest for finding my way through reality I’ll do so gladly, for sparring with Katharina is simply the best. 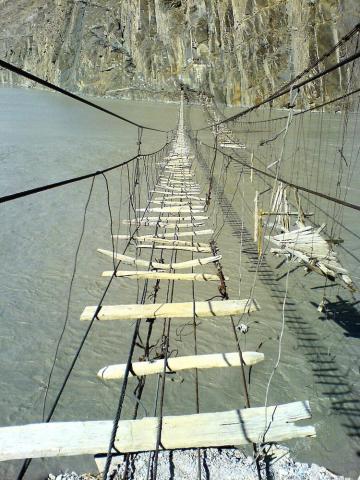 I’ll do it gladly, but first let me state what to me is quite obvious: analogies MAY be false friends. In my recent (and one impending) blog entries I’ve given three “diplomatic” examples of false analogies:

• The analogy underlying the “upgrade” of the Montreal Protocol to UNFCCC has been – to say the least – a mixed blessing. It was the frog wanting to be a bull (a metaphor) in my view. Twenty years have been wasted chasing after the wrong analogy.

• The Song never worried about the Mongols until too late They reckond that all other “barbarians” had been stopped at the Huai and Han Rivers because their nomadic cavalry could not function among the paddies. The Mongols overturned the paradigm by hiring foreigners and bringing cannon. End of Song.

In none of these cases the deductive logic is wrong (Katharina’s “Judging the metaphor from this perspective does not depend on whether or not it is true but whether or not it facilitates understanding and serves the purpose we designed it for”). What’s wrong is to be found in the assumptions. Fluorocarbons are NOT the same as greenhouse gases; Mongols were NOT run of the mill “barbarians” (Feld- und Wiesen-Nomaden), but a modern society that worked around problems of warfare.

If your assumptions are wrong, you deductions are wrong. How do you want to check the assumptions, Katharina, without reference to the “real” world? Only confrontation of the assumptions with the “outside” world will bring new and critical elements for decision – as imprecise as they may be. I’ll grant you the deductive logic any day.

So what is the “outside” world? In this deepdeep discussion over our perception of reality, I’d separate out two “realities”:

Of course, like everything in life, boundaries are fluid, and I would hate to be taken for a “binary” thinker à la Descartes, but, well, I have not found a better way to separate the strands for analytical purposes. It tracks, the strange way we apes are made: we are both shaped by “nature” and “culture”.

“Nature” exists outside ourselves, and in some complicated though limited ways, we can get some sort of hold on it – we may be blind people trying to describe an elephant by touch (metaphor) and that’s about it. So we get sensory perceptions from the real world – they are just electric signals. These signals are transformed in our brain into images and sensations: I see “green”. Is the forest “green”? Who knows – it may all be simply grey, and our brain adds the colors. Does Katharina see my “green”? Don’t know either – “How does it feel to be a bat (NAGEL)”? (Sorry Katharina for this further inroad among strange animals). If I see “green” once, however, and then again, it seems to be consistently the same “green” –it is what one may call a “law” – like gravitation. “Nature” is never devious or whimsical – just complicated. Our collective hold on “nature” has been good enough to bring us where we are (past performance is no assurance of future success).

The “social” world is an invention of humanity that is 1’000’000 years old or more. It probably emerged with language; it’s partly genes and menes. The fact that social reality has been invented (constructed) does not make it less real than the Matterhorn. It is convention that we drive on the right hand side of the road, but it is not at all subjective – you’ll confirm it if you survive the next crash. It has a contingent history, and it is the shared basis on which we build common intentionality. Conventions are shared and hence objective realities – in the sense that they cannot be changed unilaterally. Conventions are NOT subjective.

Katharina would seem to agree with me so far: “This brings me to a different perspective: From this perspective, mind and world are not separate. The world is always in part created by the mind”. Note the “in part” – it will soon vanish around the logical corner.

And THEN – Katharina joins my arch-conservative friend Milton FRIEDMAN in his “positive economics”. She writes: “Judging the metaphor from this perspective does not depend on whether or not it is true but whether or not it facilitates understanding and serves the purpose we designed it for”. When asked how he could make such coarse assumptions about humans being rational egoists FRIEDMAN answered: “as long as it works fine for my models, I’ll use it”.

The “in part” has disappeared – it would have been useful in sorting out metaphors. Unless Katharina is a poor designer, her metaphors will always “serve the purpose we designed it for” – we have a self-referential statement, for her criterion of judging the metaphor is the congruence to (her own) design. It is akin to saying: “since I’ve designed the metaphor for survival I’ll survive (unless I stumbled logically).” Sorry, it won’t do. Vertical structures are all well designed to yield results – until they hit the law of unintended consequences. See the pratfall.

Between Platonic “truth” and “subjectivity” there is the large sea of imprecision – fog, “looking through glass darkly”. We may only have an inkling of the “truth” – but that small percentage is enough – and critical. The thicker the fog the more we have to be on the outlook for cliffs, peering over the ship’s bow (a metaphor), and not just sit in the captain’s cabin and verify whether the route we chose on a mental map “serves the purpose we designed it for”.