Pity, in a way, China’s Emperor Qianlong[1]. The “Lord of the Civilized World” (this was his title) personally supervised an extensive bureaucracy reporting to him either by the “open” or the “confidential” channel. He read all correspondence and marked it: “Noted”, “What’s all this stuff?” or roundly abused the mandarin: “Indeed you are extremely stupid” and worse. A glutton for administration – he must have grown weary of the routine aspects of bureaucratic reporting. As Karl MANNHEIM aptly expressed it: “the fundamental tendency of all bureaucratic thought is to turn all problems of politics into a problem of administration”[2]. 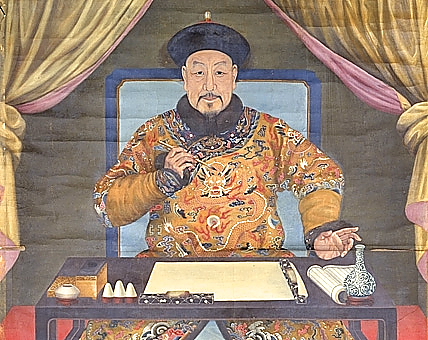 Qianlong’s problems may have been of his own making and grounded in a vacillating character. “Upon ascending the throne, he swore to seek a middle way between the rule of his grandfather, which he characterized as having been too lenient, and that of his own father, which he saw as too harsh. Such a middle ground he did attain, but in an odd way; he vacillated between extremes of leniency and harshness, so that his “middle way” was really not a constant but an average. His vermilion jottings drip pique and petulance.”[3]

Looking at the Qianlong’s personality from a distance, we might see the effect of “anchoring” at work (see my https://bit.ly/XgkFQZ). Having chosen his predecessors’ policies as reference points, his own policies were maladapted to the context of his own times and failed to explore the full scope or even to try and look behind the “horizon of the possible”. As the name implies, anchoring is immobility all the while the boat repositions itself in the wind. That’s why epigones fail.

Qianlong was a Manchu – an alien, i.e. Mongolian ethnic group – which had conquered China in 1644. Any foreign minority trying to rule a sullenly resigned majority faces a fundamental problem. Sustained rule is predicated on co-opting local elites – this is best (nay only) done through assimilation. The ensuing loss of separate identity erodes the cohesiveness of the minority or even puts its members – and even more the Dynasty – at the mercy of the now reinvigorated rebelling majority. Where to draw the (defensive) line?

Underlying this conundrum was the fact that the martial minority often is (or feels) culturally inferior to the autochthonous population. The nomadic tribes of the steppes were weary of the rich and cultured lower Yangtze provinces – decadent, refractory, clique-ridden, and mendacious. To rule implied losing one’s own values and adopt those of the majority – time led to the dissipation of the Manchu legacy.

The Manchu hit on a symbolic way of asserting their “difference” and supremacy: they forced all Han to wear a braided queue and shave the forehead. Adopting the Manchu headdress was intended to signify surrender. Among the Han on the other hand there was a strong connection between hairstyle and self-respect, because shaving the head had been reserved for slaves and convicts.

The queue had become the tell-tale sign of Manchu power – and tampering with the queue was not just a routine but a political crime signifying a threat to the dynasty and treated as treason. The stage was set for the political drama squaring off the Emperor against the bureaucracy.

[1]          The Qianlong Emperor (Wade-Giles: Chien-lung Emperor; born Hongli (Wade-Giles: Hung-li; Chinese: 弘曆; 1711 – 7 February 1799) was the sixth emperor of the Manchu-led Quing Dynasty, and the fourth Qing emperor to rule over China proper. The fourth son of the Yongzheng Emperor, he reigned officially from 11 October 1735 to 8 February 1796.1 On 8 February, he abdicated in favor of his son, the Jiaqing Emperor – a filial act in order not to reign longer than his grandfather, the illustrious Kangxi Emperor. Despite his retirement, however, he retained ultimate power until his death in 1799. In his private life he had 3 Empresses, 5 Imperial Noble Consorts, 5 Noble Consorts, 4 Consorts, 6 Imperial Concubines, 9 Noble Ladies, and 5 First Class Female Attendants; the officially recorded children were 27.