Jovan has culled this piece of news for me:

On July 27, the Olympic Games will open in London.. Perhaps the most socially significant development in London so far has been on a broad avenue leading down from Hyde Park to the Victoria and Albert Museum. 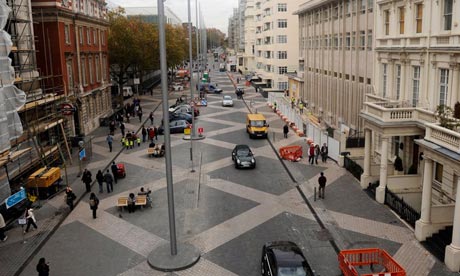 At a cost of almost $40 million, Exhibition Road has been turned into exhibit No. 1 in London’s beautification. A crisscross pattern in black and white granite spreads across the full width of the road on either side of a line of tall, sleek lighting masts that resemble towering spotlights more than traditional lampposts. The effect is dreamy, particularly when you realize there are no sidewalks.

Cars, bicyclists and pedestrians move on a single curb-free surface. Only drainage channels covered in black cast iron and a band of rough paving (for the blind) separate a pedestrian area on one side from vehicle areas. This is a new form of streetscape known in urban design parlance as “shared space.”

The “shared space” idea, pioneered by a Dutch traffic engineer, Hans Monderman, turns traditional thinking about road safety on its head. For much of the 20th century the assumption was that efficient traffic flow depended on a full separation of cars and pedestrians, complemented by traffic signals, signs, barriers and road markings that would keep people safe.

Monderman, who died in 2008, had other ideas. He wanted to raise collective awareness and responsibility by doing away with all those signs and all that separateness, and he believed that safety might in fact be increased by making all travelers intensely aware of one another. Sometimes he would test his schemes — developed in various Dutch towns as well as in some German and Scandinavian towns — by walking backward into traffic in a shared-space area. His theories were shown to work.

Shared space is not a bad metaphor for the world today, a place where the old road signs serve little purpose, separateness is an illusion, and successful navigation depends on intense awareness of every actor, from Ipanema to Tehran by way of South Kensington."

The architect wanted to remind us of the innumerable social conventions we live by without thinking – they are all part of “silent culture” that makes living together livable.

It is fun to have a space that is designed to be “without rules”. People will improvise, and call it “spontaneity”, or even “creativity”. They’ll feel elated and liberated.

Is such a space “permanent”? I doubt it. After the first visit people will develop ad hoc rules, and I suspect within three months a video-camera would discover a set of unwritten rules. “Without rules” is not a viable state of a society.

Why? I’ll draw an analogy from our own brain. By far the greatest part of our brain – the cerebellum[1] – is devoted to “supervised (in particular motor) learning[2]”. The cerebellum seems to seek micro-coordination and precision – to a pre-set standard (like walking, or speaking). It is all about learning (and forgetting we ever did) a routine. This cerebellum functions unconsciously. Even when we are attentive, we are unconscious[3].

We could not function if we were consciously to fine-tune our motor movements to a complex standard – just too slow and complicated. This separation of conscious-unconscious learning and behavior underlies also all culture. Most of what’s needed for the routine functioning of society is unconscious or ”silent” – like traffic rules. We sail on this “silent” sea of culture fully unaware of its depth and importance for our social navigation[4].

Sure we can dive under the surface that separates consciousness from routine. It might be even fun, for a short while. But then we need to come up to the surface again, leave the world of routine behind and swim toward creativity and social interaction.

The border between “routine” and “conscious action” is forever shifting. In a complex society the level of routines we live by rises continuously – like the sea level as climate changes. Moral landmarks one took as reference points in order to navigate uncharted waters are drowned[5], to the sorrow of moralists and the indifference of consequentialists. We both rely on routines and rebel against them. It is worth being reminded of this border? Mr. Monderman seems to think so. He even makes the moralistic point that routine rules divide – and that we need to reconquer “shared space” by destroying traffic signs – Luddism in consumption.

I’ll grant the ludic moment. Beyond that I’m not sure – it is a distraction from the real task at hand – curiosity, creativity and sociality (do I really need to revisit and reinvent traffic rules?). Dancing is the feeling of togetherness in the music – do we enhance it by focusing instead on the rules by which we move our feet? Is a waltz moment more intense if it not 1 2-3? (I can’t answer it – I could never walk and chew gum at the same time: that’s why I never took to chewing gum.)

Routines are like shoes: they better be comfortable and eminently forgettable. It might be fun to walk barefoot - to “feel the ground under one’s feet” – but one would not forego shoes altogether, even though one should be able to walk barefoot when necessary.

[2] http://en.wikipedia.org/wiki/Supervised_learning If I understand the term correctly, “supervised” learning refers to acquiring a pre-determined skill – like walking, speaking. This is in contrast to “unsupervised” learning, which includes discovery and creativity.

[4] In my curmudgeonier moments I view “culture” as scrapings of social rules established arbitrarily by a self-appointed elite.

[5] A good example is economics. Their ignorance of the functioning of the economic system took them to make moral judgments about it. As our understanding grows we are ready to (or fail to) discard these moral imperatives. See: Tomas SEDLACEK (2012): Economics of good and evil. The quest for economic meaning from Gilgamesh to Wall Street. Oxford University Press.