Before the UN General Assembly PM Benyamin NETANYAHU has argued that the UN should “red-line” Iran. The country should face the foreseeable threat of foreign military intervention, should its nuclear capability reach inadmissible levels. Is this a sensible diplomatic tactic? 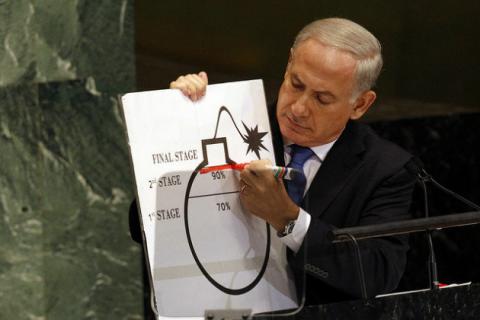 Beyond the particulars of the Iranian case we might wish to reflect on “red-lining” as a diplomatic instrument[1]. In the current issue of the Foreign Affairs Newsletter Rolf Ekéus and Målfrid Braut-Hegghammer have reflected on “red-lining” Iran https://fam.ag/TjALWG . I’d like to take their many excellent points and frame the discussion accordingly.

When conflicts loom “red-lining” is intended to bring previsibility to the negotiating process. “If you do this (or don’t) – war will ensue”. We expect the “red-lined” party (let’s call her country X) to act rationally in fore-knowledge of the consequences of its actions. “Red-lining” therefore belongs to the class of conditional statements, which are part and parcel of the diplomatic negotiating process. This gambit sets itself apart from run of the mill conditional statements in that it involves “vital interests” and the possible outcome is war.

From the point of view of one country (or international community) in the lead “red-lining” country X may be viewed as an exercise in good intentions. In effect, however, it reveals the relative power situation: the stronger does the “red-lining”. Contrary to other conditional statements, which tend to be balanced (“tit for tat”) “re-lining” is inherently unbalanced, for whoever threatens exclusion is not himself confronted with the same consequence (that would be brinkmanship, possibly leading to MAD: mutual assured destruction). “Red-lining” furthermore collapses the complex reality of international relations involving Country X to just one specific behavior and is threatened with exclusion (bilaterally or from the commonwealth of nations) if it does not comply. This is ultimate punishment and implies humiliation as means to retain respect.

“Red-lining” often comes at the end of a path-dependent process[2] – “escalation” in diplomatic parlance – and is seen as a way to stop what is perceived as inevitable. One wishes to engineer a “singularity” – Germans speak of Paukenschlag: the unexpected beating of the drum in the Haydn symphony – a bifurcation in the parlance of catastrophe theory, to get out of the unwelcome path. The problem is that an engineered singularity is unpredictable and thus fraught with added dangers as compared to efforts to dampen the path-dependent process[3].  Chaos is engineered deliberately – which might lead to blowback. Pioneering game theorist Thomas SCHELLING might argue this “the threat that leaves something to chance” (I’m probably misquoting him).

“Red-lining” bestows on symbolic value on a specific behavior – it freezes out everything else except preparations for the eventual “else”. While it might “focus the minds and hearts” of decision-makers in Contry X this tunneling creates its own dynamics and problems. Here a few reflections.

Positive actions are easier to document than negative ones. As the case of Iraq proves, it may be well-nigh impossible to create intrusive verifications that will convince everyone. Faced with this impossibility the “red-lining” country might upgrade its “red-line”[4]. Ekéus and Målfrid Braut-Hegghammer have shown how in the case of Iraq in the 90es the USshifted from verified nuclear disarmament to regime change as the only way, it its eyes, to ensure sustainable compliance. This sudden upgrade ended the readiness of Saddam Hussein to cooperate in complying with the original “red line”.

“Red-lining” also creates inevitabilities of its own. Preparations for “else” – in this case war (or worse, a preventive attack) – impose an extraneous schedule (in Iran e.g. it is the season, which affects the effectiveness of military action, but also the scheduling of war ready troops and boats). Both sides may profit from the interference. More importantly, policy-making in both countries splits internally into two camps. On both sides those who prepare for the “else” will fret at delays. Information gathering and evaluation are harnessed for partisan purposes[5]. A sudden and subtle change of policy may eventuate. If a diplomatic solution was the primary aim and given back-up credibility by threatening the “else”, now the “else” emerges as the policy goal, unless diplomatic solution yields reasons for back-down. War has become the default solution. The authors conclude: “In Iraq, and seemingly now in Iran, diplomacy and inspections became a means to an end: building up a casus belli. The strategy failed miserably in Iraq a decade ago.”

Ultimately, however, “red-lining” weakens or even destroys the negotiating process, for attempts to explore compromise if constructive solutions may be perceived (or even portrayed) by the other side as deviation from the “red line”. What could have been a constructive alternative is dismissed out of hand, or branded as delaying tactics (which they might well be).

“Red-lining”, finally, has to be viewed in light of public opinion. “Red-lining” policies need to be public in order to prepare countries for the “else”. Reductionism which is implicit in the policy is exacerbated by going public and making public opinion the ultimate judge of whether the red line has been crossed.

[1]          “Red-lining” is a muted version of “brinkmanship”. Brinkmanship is the ostensible escalation of threats in order to achieve one’s aims. The term brinkmanship was coined by Secretary of State John Foster DULLES during the Cold War.] Eventually, the threats involved might become so huge as to be unmanageable at which point both sides are likely to back down. Thomas SCHELLING https://bit.ly/PUehMH received a Nobel Prize in Economics in 2005 for his pioneering work in this area..

[2]          This is a gross and unwarranted simplification of the situation – based on the false analogy that states like individuals have unitary purpose. This is seldom the case. A state’s policies are the triangulation of complex internal forces, which are affected by the “red-lining”, but whose adjustments to it are very imperfectly known to any outsider. In the case of Iran: will the red line strengthen champions of accommodation, or favor hawks? Difficult to predict.

[3]          History knows such engineered ruptures. With Terror escalating in France, its leaders were successfully overthrown. No one knew, before the fact, how this engineered singularity would have played out. See: Bronslaw BACZKO (1989): Comment se sortir de la Terreur. Thermidor et la Révolution. Gallimard, Paris.

[4]          I shall not enter into the murky world of deliberate shifting of “red lines” – brinkmanship – in order to gain advantage: the “dance of the seven veils of a hidden agenda”. Hitler, of course, was a master of this kind of deception. See: Telford TAYLOR (1979): Munich. The price of peace. Vintage, New York.

[5]         I quote the authors: “Letting diplomacy fall further prey to talk of war will undermine efforts to detect — and hopefully prevent — Iran’s nuclear breakout. Last winter, Israeli leaders took to the airwaves with an information campaign trying to make the option of striking Iran seem more main-stream. Netanyahu attempted to discredit the IAEA’s assessments that the Iranian nuclear program had not been resumed. Last winter, he indicated that intelligence reports suggested a more acute threat. But there is no evidence to prove his point.