Professor Raymond Cohen, a leading historian of diplomacy, says “The practice of Greek diplomacy was quite rudimentary” (…) “Compared with Persian cosmopolitanism, Greek diplomacy was provincial and unpolished”.[1] Since my high-school days, I have been prejudiced against all things Greek – ancient that is. “The ancient Greeks had thought everything worthwhile,” the professors told us: we are epigones (and administrators) bound to chew Greek philosophical cud forever. It is thus with some glee that I discover a chink in the Greek armor: they were poor diplomats. Even worse, they were rustic (which to a diplomat is an insult worse than “deceiver”).

Why were the Greeks so hapless? My conjecture is that this reflected in part their political institutions. Kingdoms and tyrannies were the exception in the Greek commonwealth. Oligarchies or assemblies of the people ruled Greece – let’s call them extended oligarchies. A diplomat had to address a group and get consensus. The diplomat had one shot at his task: he spoke before the assembly. It was “one-to-many” persuasion. Rhetoric was his only instrument. If he failed, he lost his case.[2] The Greeks lacked adequate communication instruments for their “one-to-many” diplomatic ambitions – the approach faltered.

The paradigm we have all come to identify with “bilateral diplomacy” is the child of autocratic governments “talking to each other” in “one-to-one” interaction. The aim is achieving stability – dynastic marriages cemented stasis. The aim was a well-defined and unchanging world map, where everything was divided up and all the surfaces neatly colored.

This “one-to-one” paradigm survived the shift from autocracy to democracy. The government of a country acts with “one voice” as the notional autocrat (albeit with popular legitimacy by delegation) in foreign affairs. Consensus-building within the country is the government’s responsibility. The diplomat is not directly involved.

The “one-to-one” paradigm works best when settling “vital interests” bilaterally. “Vital interests” are political discontinuities: they are either/or situations often resolved by overt or covert use of raw power. Here, the government legitimately represents the state as a whole. War and peace, or territorial issues are “vital interests” – the issues of the “map”.

Wars and their equivalents have proven poor policy tools these days – see Iraq and Afghanistan. Borders between states are stable – but for “grandfathered issues” – unsettled territorial disputes from the past. “Regime change” or “economic system change” would be a further case of “vital interests”: “rogue” states come to mind, but they represent the exception to the rule that modern states get along. Diplomacy has worked in Burma, and might do the trick in North Korea.

Beyond these rare instances, the “one-to-one” paradigm looks increasingly threadbare. The stuff of international relations, nowadays, is all about many countries finding an ongoing consensus on “policy preferences” within a common institutional framework: the UN, WTO, IMF, and other international fora. It is “many-to-many” relations stretching over time and aiming for predictable change, rather than stasis. The aim is “pooling forces” toward a common task, rather than “dividing up” the political space.

Furthermore, “preferences” entail no discontinuities and either/or situations – it is all a matter of degree, where infinite adaptive compromises are possible within/between policies. Everything is in a sense fungible – that is why we use the term “preference”. A good example of such a system at work is the EU. Countries are in perpetual negotiation; tomorrow’s gain offsets today’s loss. It is difficult for a unitary government to have a consolidated stance over time.

In the world of “preferences” it is difficult to speak of “national interest”– national positions reflect internal triangulation among many stakeholders shifting in accordance with the evolution of the negotiation. The state arbitrates and, at best, includes the “general national interest”. Stakeholders are no longer content to have a say indirectly through governmental representation. They want to have their say directly. Transnational alliances among like-minded stakeholders emerge – civil society knows no borders.

The unitary stance of the government flags, as stakeholders and their members become actors. In moving toward a multinational consensus, states are no longer alone; they may not even be principals, but rather the national institutions charged with implementing group consensus.

“Greek-style diplomacy” – “one-to-many” diplomacy – is making a comeback. Diplomats who want to play a role within this framework must address many stakeholders at once. One needs means other than those available within “one-to-one bilateral” diplomacy. Public diplomacy, or e-diplomacy, comes to mind. Diplomats today begin to grapple with the same problems Greek diplomacy tried to address: how to get “many” to agree with one’s positions. They supplement their public rhetoric with electronic tools: they aim to garner widespread accord with their positions by large dissemination.

Three problems arise. The first is that “one-to-many” diplomacy is unstable. It goes toward “many-to-many”. Cacophony ensues. Celebrity diplomacy helps e.g. in capturing the agenda. It is rather haphazard, however. Also, it is so loud an instrument, it blacks out the rest. The ability to temper the electronic instruments – speaking softly and slowly – will be one determinant of success.

The second is the often emergent character of the outcome. Once the author launches a twitter message, she never knows whether it goes viral, or fizzles out, or how it gets changed in the process. The crowd always surprises.

The third is lack of legitimacy. Stakeholders are self-appointed. They are not democratic in a larger sense, nor do they try to be. From my Berkeley days, I can attest at the lack of democracy inherent in “movements”. Though I disagree with Allan BLOOM on many things, I must agree with him on this: “The most successful tyranny is not the one that uses force to assure uniformity, but the one that removes awareness of other possibilities.” The price of rallying rapidly around a common goal is the loss of deliberation. 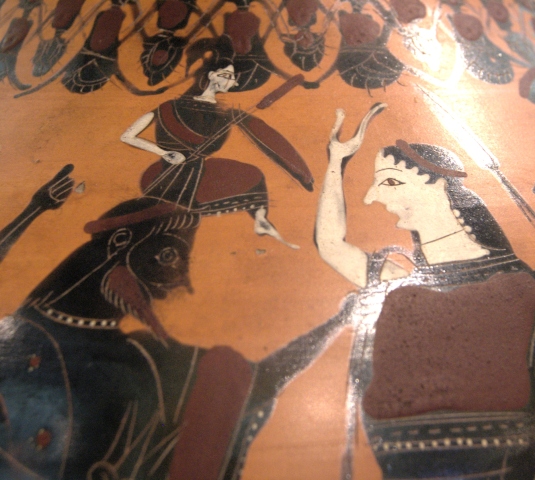 As bilateral diplomacy declines “Greek-style diplomacy” emerges. Unlike Athena rising as an adult from the head of her father – we have to learn to live with this emergent reality. It will not be easy.

[2]           Thucydides shows us an instance of Greek diplomacy: the negotiations between Athens and Melos over the city’s incorporation into the Athenian empire. In 417 BC, the Athenians moved on the Melians and demanded that they join the Delian League, lest they be conquered. The two sides held a meeting where they discussed the likely consequences of alternative courses of action now before the Melians. This meeting was held between “the governing body and the few,” not before the people, leading the Athenians to imply that the Melian elite was afraid that the people might support the Athenian position. In the end the Melians rejected the Athenian ultimatum. Athenians conquered the city, killed all males, and sold women and children into slavery.

What can Twitter diplomacy learn from Ancient Greek diplomacy?Waging a (private) cyberwar
Scroll to top