You are here: Home1 / Generosity as fairness

Continuing the dialogue on the concept of ‘climate refugees’……

1.1        In the economic sphere an act, a habit, an institution, a law produces not only one effect, but a series of effects. Of these effects, the first alone is immediate; it appears simultaneously with its cause; it is seen. The other effects emerge only subsequently; they are not seen; we are fortunate if we foresee them.

1.2                   There is only one difference between a bad economist and a good one: the bad economist confines himself to the visible effect; the good economist takes into account both the effect that can be seen and those effects that must be foreseen.

Frédéric BASTIAT What Is Seen and What Is not Seen

Katharina, in response to your recent post on climate-refugees, I’m a practical economist, and have been one for the 50 years. My specialty has been “resource economics” and “benefit-cost analysis” – the art of best spending public money under the circumstances. Public service has reinforced this attitude. My goal was not to help special interests, but the “common weal” – however imperfectly defined.

Doing good is easy – who wants to be a Scrooge? Doing good in a specific context – matching means to needs – is more difficult. We need to make stark choices about means. This you refuse to confront: your emotional appeal under “secondly” is not an appeal to fairness; it is simply an appeal for “more”. A case of rhetorical “bait and switch”.

I’ll use a parable to illustrate my point. Amir and Mohammad are two refugees from war-torn AfPak. They leave their village together, under a hail of hostile bullets. They walk together to the refugee camp. They both qualify. Here their destinies diverge. Mohammad is destitute. He remains helpless in the camp. Amir is the amir’s son. He has access to his father’s money. He finds a refugee runner, who takes him to Indonesia. There, together with other Amirs, he embarks on one of these pitiful boats trying to cross over to Australia. The boat is spotted. Amir is in Australia. Should he be allowed refugee status? 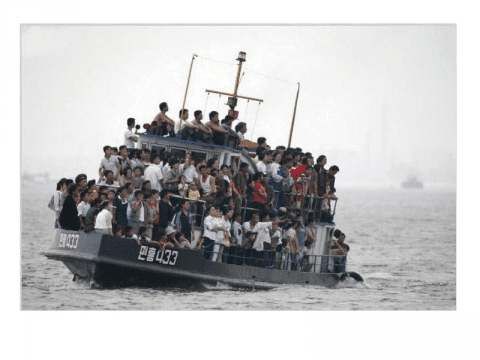 Mohammad’s and Amir’s needs are the same. The circumstances are different. By dint of chance Amir has been able to jump the queue of people seeking asylum in Australia. In truth, since he had the money to get as far as the boat, his needs were in fact less than Mohammad’s. Yet everyone blames the Australian Government for sending Amir to Nauru. No one praises the Australian Government for letting Mohammad in on the merits of his case. Such is the effect of emotions, Katharina.

Treating like in like circumstances is the most difficult policy issue on the planet. The poor, Katharina, are mostly hidden. Alpha-bullies will try to get to front stage, and gobble up the few resources our limited generosity puts at the disposal of refugees. We better be sure of being fair. Emotions spot the visible, Katharina, and ignore the invisible. Such is the power of oxytocin.

One needs a steely eye to see beyond the alpha-bully. You may argue, in Spencierian fashion: “survival of the fittest”. Except that it is a tautology, not a criterion for action. Surviving the ordeal is not evidence of “fitness”, just an assessment that –for any number of reasons – the survivor has survived. A flagrant case of post hoc propter hoc: availability bias – nothing more.

Let’s move on to “climate change refugees”. If Amir and Mohammad are from two neighboring villages, only separated by an international border, and both must leave, I see no earthly reason for awarding an entitlement solely on the basis that either crossed the border. Need is an objective criterion to be measured on the scale of fairness.

Classifying a group of people as “refugees” gives them an unassailable entitlement. An entitlement is a theoretical construct to be applied irrespective of circumstances. It categorizes people into Primo Levi’s “saved” and the “drowned”. The issue of climate change, however, is so complex and profound, it cannot (and better not) be dealt with through the blunt knife of entitlement. By categorizing you invite moral hazard – Amir gets preference by putting his life at risk on the leaky boat. Classification is a distraction.

Distracting? Yes, of course. Climate change is a devilish issue. It is so intricate and complex – it invites easy shortcuts to “feel good” solutions. UNFCCC is an example of Parkinson’s Law at work. Remember? Since the Board of Directors cannot address the real issue (building a nuclear plant or not) it talks at length, even acrimoniously, about the design of the bicycle-shed instead. In climate change terms: catching free-riders replaces addressing the issue of changing people’s habits.

Granting “climate change refugee” status is another bicycle-shed discussion. It is a good example of “Law of Second Best” – if you need to cross the Atlantic, rushing into the cold water and start swimming may not be a good approximation.

I’ll be more blunt, Katharina. Helping Amir and ignoring Mohammad is a case of self-indulgence. It is an instance of “do-goodism”. It puts your emotions at the center of choice, rather than people’s needs.

This line of argument also settles the issue as to whether we are dealing with metaphor or disambiguation. Until you persuade me that the distinction is grounded in needs, it’s an emotional metaphor.

Is it misleading to speak about climate refugees? Of legal concepts, metaphors,...Of alpha-bullies, free-riders, and Bernard Machines – 232
Scroll to top