I’ve come across a substantial study of European perceptions of “Asia”[1]. It is one of numerous similar studies as background to the ASEM process[2].

According to this study, research on perceptions is not concerned with the study of “facts as such” as with the question of how facts are observed, constructed, and understood – here specifically the media, public opinion, and opinion leaders. Studying the social reality underpinning relationships between countries or regions seems to me a promising undertaking as these relationships deepen (or made to deepen) over time.

In the context of Europe-Asia relations the first question is then whether “Asia” is a “fact as such” which people may observe and understand.

The geographical boundaries of Asia have never been defined on the ground – nor will they ever be[3]. Different cultures and ethnic groups have lived side by side in separate regions within “Asia”. Exchanges have taken place, so far without acculturation or integration. On the ground we are then very far from a “single-entity” concept of any kind which could yield meaningful content to the concept of “Asia”.

In fact, the term “Asia” may be close to a “floating signifier” which, according to Claude Lévy-Strauss is an “undetermined quantity of signification, in itself void of meaning and thus apt to receive any meaning”. In everyday situations such “floating signifiers” are very useful, I’d conjecture even essential. They yield an “impression” – good enough for collective action. Our mind is geared to work with approximations and ambiguities, even (or particularly) signifiers without referents, or implying contradictions or suspensions of disbelief. One is tempted, somewhat cynically, to mutter that such “floating signifiers” are what makes the social world go round[4].

ASEM is politically a very useful instrument (though it has now inflated to include 49 countries, which may defeat its original purposes). Its originators established a “situation” which facilitated meetings between political heads, getting acquainted with each other, learning about respective ambitions, and concerns. It is political “grooming” (see https://bit.ly/S4kROe for my discussion of this term) with elements of potlatch, and may be seen as precursor to establishing closer, if not collective political intentionalities. In itself, however, it does not bestow substance or meaning to the floating signifier.

Is “Asia” at least an emergent fact? The question is justified. “Europe” may have once been a floating signifier. Over time political and economic processes have emerged to give content to it. Europe moved from being a bunch of warring states to a politically integrating region. As the warring states came to grips with their destructive ways they created institutions to deal with them. Asia today is functionally integrating – but is it about to move beyond it to some form of political integration, i.e. toward collective intentionality enshrined in common or at least joint institutions? Are “Asian region-building processes” at work?

Better to answer this question by analogy we might throw a glance as to Europe’s path-dependent institutionalized outcome. My hunch is that the paths to integration are not comparable.

At no stage in history did Europe’s drawn-out process of state formation yield a stable equilibrium. Two world wars ensued, and Russia’s ambition to create a neighborhood (rather than an overseas) empire ended in failure. Asia does not have such a history of chronic warfare or an obvious need to structure itself to avoid it[5].

Present day political contingencies are also different. After WWII the US (and by reflection the USSR) imposed regional institutions on Europe, and made them possible as they emerged[6]. Both powers are now involved in Asia. Neither seems keen at the moment to push for regionalization in Asia. On the contrary, the US policy is rather one of “containment” of China with the assistance of its neighbors – i.e. it works against “regionalisation”. The roles of these two external powers count, particularly as new institutions may be struggling to emerge.

The economic and cultural structures making up “Europe” and “Asia” are interconnecting in ever more complex ways[7]. At the bilateral level much is being done. The study concludes: “This image of Asia is argued to have important practical implications at the policy-making level as it underlines the weight given to bilateral ties and country-specific strategies – at the expense of policies that incorporate broader regional perspectives. Europe’s policy-making will find it difficult to adjust to Asia’s increasingly regional dynamics. Yet, the more effective Asian regional co-operation and integration becomes and the more Asian regional institutions’ problem-solving capacity increases, the more important it will be for the EU and its member states to reach out to it.” (pg. 23).

Asia’s regional dynamics is undisputed. The question is whether state involvement will transcend functionality and move toward Western-style institutional solutions to which Western-style institutional structures may dock. This, in my view, is an open question. My conjecture is that Asian countries may find institutional structures to be strictures on their dynamics, and by-pass them, or use them for subordinate purposes[8]. “Europe” – and here I mean mostly the EU – may approach the new dynamics in the Asian region with the mindset (or mental map) of Prof. Henry Higgins: 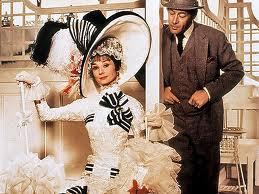 Why does everyone do what the others do?
Can’t a woman learn to use her head?
Why do they do everything their mothers do?
Why don’t they grow up, well, like their father instead?

Why can’t a woman take after a man?
Men are so pleasant, so easy to please.
Whenever you’re with them, you’re always at ease.[9]

[4][4]         Examples are myths, religions, transcendence, and a good part of reflective philosophy. “Idea” in th Platonic sense is my favorite example of floating signifiers.

[5]          Why Asian powers did not battle each other is unlikely ever to find a credible explanation. Geography and technology may be a cause. Colonization by the West may have suppressed any emerging urge. Japan belatedly tried, but it was a case of “Occidentalism” following a long period of self-imposed isolation. Culture may have played a part, or it may just have been a case of contingency.

[7]            See: Warren I. COHEN (2002): The Asian American century. Harvard University Press, Cambridge. Here is a view from the other side of the Pacific but describing a process of interpenetration that is equivalent to the one bringing together “Europe” and “Asia”.

[8]          “Deep” culture might also play a role. Asia’s cultures have been deeply contaminated by Western categories (after all Marxism prevails in China and western-style liberalism in both India and Japan), so I’d hesitate to invoke “culture”

[9]          The sexist attribution of the male role to Europe is contingent and in no way reflects my view of the power relation – even though “Asia” has often been amalgamated with a feminine role.

The EEAS and a new European diplomacyCOP18: Negotiating Climate Change. Where are the women?
Scroll to top