You are here: Home1 / Once upon a change in mentality…

Once upon a change in mentality…

We love to anchor history to events – kings and battles or revolutions. Savvy historians tell us that this reflects our need for retrospective coherence – and not reality (which is mostly chaotic). History, they (rightly) argue, has no beginning[1] – we emerged somehow from hominins – and slowly moved to what we are today. “Events” vanish when set in BRAUDEL’s longue durée. So how should we structure history? Here an alternative.

History might be usefully looked at through the lens of evolutionary theory[2] – the points of similarity between these two kinds of processes are numerous (but so are differences). On the whole biological evolution follows a gradualist paradigm – small changes along the line of time. Yet between long periods of humdrum stability sudden accelerations may occur: this unsteady pageant is called “punctuated equilibrium”[3] – new species may then “suddenly” emerge and they may even evolve into new families or even orders. As in biological evolution, in history we seem to observe sudden accelerations. At the end of this burst, everything has changed. What may cause them?

New technologies have been heralded as the cause of change in the pace of history (e.g. the development of writing[4]); philosophical or religious ideas may be the source (the Axial Age[5]). My favorite development is the subtle and imperceptible “change in mentality” – changes in the habits of thought that in time enable peoples to advance swiftly[6] in transforming their environment. When these changes in mentality occur, they tend to sweep history on a broad front: somehow and suddenly we look at reality with wholly “new eyes” – or from a new angle – and everything looks differently.

It may be (my) fairy tale, but I see at least two such “changes in mentality” in the (Western) past. Both have to do with measuring reality – and it is a trend away from qualitative (and unverifiable because subjective) judgment. Put it another way: it is a renewed commitment to attentiveness of our surroundings.

The first such change in mentality took place when the Greeks discovered what I might call “analogical thinking” – roughly 500 BC. Geometry and trigonometry emerged – based on analogies. Distances, surfaces, and volumes were measured – practical metrology emerged. In philosophy, syllogisms (which are close to analogies) were codified. It was the first full-fledged stab at rationality.

The second change in mentality began around 1250 AD[7] and might be seen as having reached it acme 200 years later – I’d call it a transition to the “numerical”. Let me cite here the author who brought to me the idea of “change in mentality”: “The West’s distinctive intellectual accomplishment was to bring mathematics and measurement together and to hold them to the task of making sense of a sensorially perceivable reality, which Westerners, in a flying leap of faith, assumed was temporally and spatially uniform and therefore susceptible to examination” (pg. 17).

This new mentality measured mechanical causes and effects and introduced a logical order, from time and space (perspective in particular) to planets and stars. In my view the crowning achievement (and the harbinger of more to come) was double-entry booking. Here for the first time ever there was a “social reality”[8] – the firm – dissected, measured, and revealed. “Double-entry bookkeeping was and is a means of soaking up and holding in suspension and then arranging and making sense out of masses of data that previously had been spilled and lost.” (pg. 220)

The first and second “change in mentality” relied on certainties: these were mono-causal relations between cause and effect. They share their faith in “reductionism – the belief that a whole can be understood completely if you understand its parts and the nature of their ‘sum’”[9]. Teleology ruled: the outcome was inherent in the premises. The scope was the inanimate world – the world of reactions; the intent was directive – it was homo faber at work.

The outcome of the first change in mentality was the brilliance of classical Greece; the second was the Renaissance, and then the industrial revolution(s). In this world the individual – human or planet – was the actor. 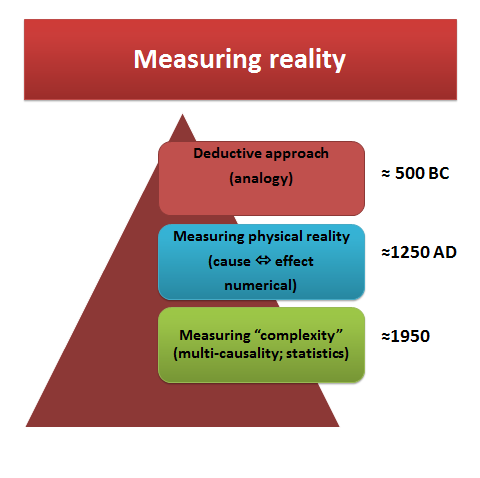 A third “change of mentality” is in the making right now. We are in the middle of it and we have yet to grasp its import. We don’t even have a coherent language to describe it. I grope for a descriptive of this emergent historical period. Tentatively I employ the label “measuring complexity”. This term signifies vaguely the broadening of human attention from the inanimate and mechanical to the complex and living, and from the reactive to the interactive; our concern is shifting from the individual to the social group and we move from individual humanism to “social humanism” – which is “we are in it together” writ intellectually.

In this world the “laws” are different – better, they are replaced by “propensities”. Actions are mere “enablers” that allow many outcomes. When large numbers interact we get surprising results: small causes may have large effects; macro-outcomes emerge unexpectedly from micro-behavior (“blowback”). We no longer are in a position to direct such interactive and living processes; we may be able to adapt to them and even influence such processes as whole, but not the individual outcome. Uncertainty and unknowns are the rule.

The analytical methods underpinning this novel attention are different. We need statistical methods to tease out probabilities rather than certainties; chaos theory and dynamical systems theory[10] are some of our new analytical guides. If in the mechanical world the detail could be ignored as “noise” now essential truths may be found in the richness of the detail. We are also helped in this by our newly acquired ability to “freeze” time: we record now and analyze what were once fleeting sensory perceptions. To do so we crunch enormous amounts of data which we fit into ever more complex models.

This new way of “measuring reality” is spreading like wildfire – spanning areas from economics and finance to distributed or undirected as well as social networks and crowd behavior. I’m not ignoring areas like consciousness as well as all aspects of “social reality” through which we organize for “collective intentionality”. Here teleology no longer applies, and is replaced by creativity.

I see no end to its transformative drive – and it might be our novel and adaptive way of tackling global issues like climate change and ways better to live together. This comes at a price: the individual is no longer autonomous from the group, or the environment. For the first time the strength of the “crowd” is pitted against that of the (heroic) “individual” and the outcome of these opposing worldviews is much in the balance.

From Adam and Eve “having dominion” over the universe we are moving toward recognizing and understanding humanity as part of the living whole – and this transition is moving forth right NOW. How exciting.

[7]          It may have been the result of our first “making sense” of zero in the West. See: Brian ROTMAN (1987): Signifying nothing. The semiotics of zero. Stanford University Press, Stanford.

[New podcast] The telegraph and diplomacy: An interview with Tom Standage

Memoirs of UN Secretaries-General: Eyes on the Spies