In blog entry 178 I have provided an example of how we fail to see what’s obvious, if it does not fit our preconceived ideas. Before I move to ideologies currently at work in shaping what one may call the Zeitgeist – the spirit of our time – let me cast a look on the opposite process: inventing the invisible – or if you prefer the less euphonious “inventing the non-existent”.

Pity the Cagots of old – fortunately hardly anyone knows about them these days. They have vanished from the collective consciousness of west of France and northern Spain where they were shunned, despised and persecuted for a good one thousand years[1]. They were “untouchable” and had their own holy water stoops. 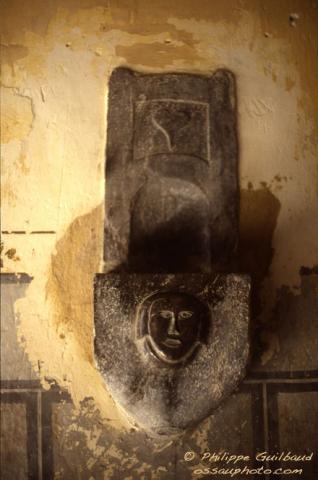 Cagots were forced to use a side entrance to churches, often an intentionally low one to force Cagots to bow and remind them of their subservient status, and they were seated along the northern (and coldest) wall of the church.

I’ve chosen the Cagots because historians have been unable to identify any cause or reason for the emergence of discrimination against this group. It would seem that its existence is exclusively a “path-dependent outcome” of some long forgotten contingency[2]. In the darkness of time a “difference” was construed – the reason was immaterial. The initial belief recruits its own web of supporting evidence. Once culturally established, this difference took on a life of its own[3], and was transmitted as prejudice through the ages[4]. Even should you take the initial fact away: the web of explanation is strong enough to support the belief without it.

Cagots are no longer persecuted; most French people don’t even know that they ever existed. Their descendants probably live on still as clusters of families practicing mild forms of endogamy.[5]
This is not the only instance of such “invented differences”. Fifty years ago I remember doubling over from laughter as I watched the comedy called “The Talisman” at the Burgtheater in Vienna. The farce had been written by Johann NESTROY in 1840 as an adaptation from a French vaudeville play. The play describes the tribulations of a pretty redhead discriminated because of her hair, which people took as revealing sign of shifty “foxiness” (foxes have a bad reputation in many cultures).

Social capacity to invent mirrors social capacity to ignore. In either case the process may start out as a contingent event. Positive social feedbacks are inherent among people as we emulate one another in order to achieve social recognition. It is the well-known route: “I like what you like – I hate what you hate.” It has its uses, for it hastens consensus. It also has drawbacks: when it attaches to differences – invented or otherwise – it can become an instrument of exclusion.

This phenomenon I’ll discuss in the next blog entries.

[1]          Here are instances of the treatment meted out to them. They were required to live in separate quarters in towns, called cagoteries, which were often on the far outskirts of the villages. Cagots were excluded from all political and social rights. They were only allowed to enter a church by a special door, and during the service a rail separated them from the other worshipers. Either they were altogether forbidden to partake of the sacrament, or the holy wafer was given to them on the end of a wooden spoon, while a holy water stoup was reserved for their exclusive use. They were compelled to wear a distinctive dress, to which, in some places, was attached the foot of a goose or duck (whence they were sometimes called “Canards”). They may have been made to wear a red web-footed marker. So pestilential was their touch considered that it was a crime for them to walk the common road barefooted or to drink from the same cup as non-Cagots. The Cagots were restricted to the trades of carpenter, butcher, and rope-maker. See also
[2]          For a discussion of such concepts see Paul PIERSON (2004): Politics in time. History, institutions, and social analysis. Princeton University Press, Princteon. Also: Douglass C. NORTH 1994): Institutions, institutional change and economic performance. Cambridge University Press, Cambridge. [3]          Psychologists have long discovered prophecies can be self-fulfilling and self-perpetuating. See e.g. G. DOWNEY et al. (1998): The self-fulfilling prophecy in close relationships: Rejection sensitivity and rejection by romantic partners. Journal of Personality & Social Psychology 75: 545–60.
[4]          Cagots had no physical characteristics identifying them. Cultural tools were used to transmit the stigma, like rhyming songs that kept the names of Cagot families known. [5]          I found the first reference to Cagots in Graham ROBB (2009): The discovery of France. A historical geography from the Revolution to the Fist World War. Norton, New York. Here is what he has to say: “Nearly all the old and modern theories are unsatisfactory… the real “mystery of the cagots” was the fact that they had no distinguishing features at all. They spoke whatever dialect was spoken in the region and their family names were not peculiar to the cagots… The only real difference was that, after eight centuries of persecution, they tended to be more skillful and resourceful than the surrounding populations, and more likely to emigrate to America. They were feared because they were persecuted and might therefore seek revenge.” (pg. 44-46)