When I speak I do not begin by explaining the extremely complex rules of grammar and syntax that underlie my sentences. How boring it would be for the listener about to struggle with the shower of my pearls of wisdom!

I assume that we share the rules and go on to apply them in order to communicate. I concentrate on transmitting information – conveying to my partner knowledge I believe he does not have and which might make a difference to him (if she does she’ll tell me with a quick and vague sign of impatience – like chasing a whisp of smoke). As members of the same culture  (the infinite number of shared rules that make social life possible) we silently presume unchanging commonalities and concentrate on meaning – the differences[1] and changes that require individual or social adaptation. That’s how we learn and share experiences.

It is the silent part that allows sharing of meaning. Except that between cultures we may find hidden and unrecognized differences under a veneer of commonality. When I say “government” I implicitly subsume the Western theory of government – possibly a whole library of meanings. To other cultures the same word may signify something quite different. Enter the diplomat, who painstakingly explores these hidden and incompatible assumptions and picks apart there unspoken “false friends”. He reveals concealed differences.

Most assumptions are unconsciously unspoken. We are like a ship at sea without a chart of the cliffs lurking underneath the oily surface of the sea of shared silent culture. One may be excused for not seeing  differences while  we sail so smoothly.

Sometimes, however, the cliffs are above the water line and in full view. We fail to notice them anyway. Though we physically perceive differences, instinctively we refuse to given them meaning. The images just “don’t make it on the radar screen”. What is most hidden is hidden in plain view, and a never-ending source of misunderstandings.

Here is an example from the Swiss pavilion at the world exhibition in Seville in 1992. The Swiss concept-artist BEN was asked to provide the passing crowds with a “meaningful” statement to cap and sum up, in a way, the experience.

This is what everyone saw:

Switzerland does not exist

It was 1992, and the country was dithering between integration into Europe and going (once more) its own way. The provocative picture sparked a heated debate within the country. Many perceived the message as disparagement of Swiss identity and warned that the country’s inexistence would be at hand should it move closer to fast changing Europe.

Except that BEN had supplied not a painting, but a diptych. Next to the black sign stood a white sign (my wife, who helped supervise the exhibition can’t remember whether the paintings were next or subtly juxtaposed to each other): 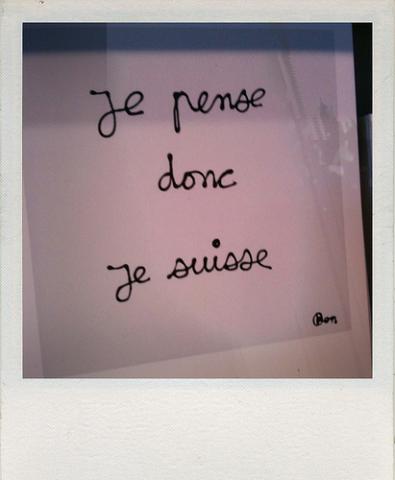 As an economist I’s say that BEN intended to highlight the difference between a rentier capitalist and an entrepreneur. Or “inheritance” vs. “potential – if you wish. Denial of physical identity – the stereotypes of mountains, clocks, cheese and yodeling cowhands – went hand in hand with affirmation of spiritual identity – the Swiss “love for thinking”.

Except that in this instance the good Swiss people refused to think. No one acknowledged the juxtaposition[2], and the discussion centered exclusively on the first half of the message. Many upright people were full of self-doubt at the time. They rejected implicitly the affirmative and sought out the negative – so as better to blame the artist as messenger for revealing their quandary.

Hidden in plain view. It is a psychological trick – we reject realities, which are not conforming to self-affirmation[3].

This example is telling, if somewhat frivolous. Other examples are fundamental and have huge social and political impacts. The subject of my next blog entry will deal with such an example.

[1] Digitalized telephone calls are built on this principle: what are transmitted are bits that have changed from the previous frame. And since in “telephone time” little changes, companies can use these periods where nothing changes to send other information down the wire. Instead of one second of “nothing” signals we send a rule to the computer at the other end: “until you hear otherwise, assume “nothing” to be the signal”.

[2] I’ve had a hard time finding this second painting on the net; and there hardly is any discussion of its link to the previous image.