The Ford Edsel[1] was one of the “greatest brand blunders of all times” – a car designed by market experts that never sold. By the time it came on line in 1958-1960 taste had changed. Ford’s CEO happened to be Robert McNamara, who built the next Edsel: the Vietnam war[2]. 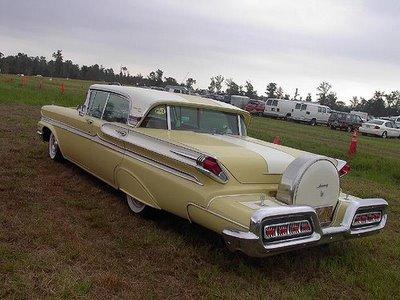 “Creating an Edsel” is highbrow slang for “failure”. This albatross hung around Ford Motor Co. neck for a long time (ridicule is the worst destroyer of reputations). Now, Google has had more than its share of failures. Remember “Google Wave”[3]? And this was not the only blunder. Yet Google’s reputation is stellar. Part of it is that it does some good things extremely well – gMail, Google Maps, etc. One might argue that people strike a balance and then embrace the result unstintingly.

Is this all there is to it? I have another conjecture.

A car is a simple enabler: it allows me to go from A to B in some comfort. More subtly it signifies many things to my social environment – but that’s about it. Testing its market appeal can be done by experts (up to a point – the Edsel failed because of image problems). The customer pays for the testing as part of the sticker price.

By comparison with a car a software program is a fiendishly complex enabler. There are just so many things one can do with it. There is no limit to the uses it can be put, so experts have a difficult time testing its infinite possible uses in all circumstances. I shall add parenthetically that they make it more difficult for themselves by adding “bells and whistles” – strange features, unnecessary adds-ons, and what else. Under such circumstances “crowd-testing” is essential. “Crowd-testing” is another term for “trial and error” done by a swath of users. Various β-versions are circulated – comments are received, and an improved version accrues.

The customers do the testing. Customers who pay for the product are not going to be happy about having to find bugs[4] in the program for free – and wait in frustration for Google to come up with a better version. By chance or design[5] Google hit on a way to solve the problem of rewarding the users for their bug-identifying skills and strengthen product and brand loyalty. It gives the product away – it is free.

Even if the service is just a β-version (and not really up to standard) one is tolerant or even magnanimous. As for the payer – the advertisers – as long as they get the hits they pay for, they do not care too much about the quality of the product. Everything is just “good enough” all around.

There are other novel ways to deal with complex emerging products – it is to make them for free. This is the strategy chosen by Wikipedia – and look at the result. The largest assembly of human knowledge ever attempted – and it is for free! The challenge here lies in the sheer number of entries which have to be available in “real time”. There is a race between accuracy and timeliness of the information and accuracy loses out. Each of the millions of Wikipedia entries is forever a β-version and users are asked to evaluate them and – if they care, participate for free in the evolutionary development of each entry. A new currency was “invented” for to pay for the participation – respect. That’s what keeps the project rolling. This is not an isolated instance, by the way: LINUX would head a long list of examples.

I have discovered a further model for testing complex emerging products. Samsung hit on the strategy of “staff-testing”. It has built a whole city for its employees, with all sorts of amenities, and fringe benefits. It is understood that the staff will voluntarily test emerging SAMSUNG integrated set of products in return. SAMSUNG’s overall objective is to develop a range of products that can work in harmony to provide a totally integrated solution. It wants to impact positively on people’s lives, both at home and in the workplace by providing seamless and fully scalable security solutions which will not disrupt an individual or an organisation’s day-to-day activities, but add real value to them. Samsung City is the venue where “staff testing” takes place.

The SAMSUNG model is a “half-way house” between the two extremes of Ford and Google. The cost of testing, which would be staggering if done through dedicated units only, is outsourced in a diffuse fashion to the staff, which is rewarded for its collateral testing tasks through the amenities and facilities connected with living in SAMSUNG City.

What lesson do I draw?

As products become more complex and interconnected – and this will be most emerging products – the ancient model of direct arms-length dealing between buyer and seller might be eroding. Proxi payments emerge. In the case of Google it is the advertisers who pay – not for the product per se, but in accordance with the use people make of it. Wikipedia uses the currency of the voluntary sector. All models, including the one by SAMSUNG are experimenting with weakening the linkage between incentive and reward. This has become possible when people’s basic needs are, in some fashion, already covered. It is an emergent development of an affluent society – and predicated on a fairly fair distribution of basic income.

The structure of the economy is evolving fast in absolutely novel ways. How to pay for a product forever in the making? Virtual services and goods invite zero-pricing or other proxy-forms. We may soon find ourselves living and paying according to quite different rules than we have been used to. And what about the old incentive system? It has taken on a threadbare and provincial look – the poor relation of an economy that is increasingly liberating itself from materiality.

[2]          H. R. McMASTER (2005): Dereliction of duty. Harper Perennial. New York.
[3]          https://techcrunch.com/2010/08/04/wave-goodbye-to-google-wave/ [4]          In fairness to Google “bug” refers here both to foreseeable error and the unforeseeable mismatch between the program and an unknown use.
[5]          Ever the spoil-sport, an economist might argue that the virtual character of software predisposes them for being “public goods”. When the marginal cost of using Google’s serach engine is essentially zero, economic theory demands a corresponding price.
DiploFoundation
0 replies