The following statement was posted for discussion in an Internet governance group:

“I’m not sure I understand what you mean, but the core meaning of Freedom of Expression is the right to offend, and in particular to disparage and ridicule opinions and creeds of any kind, whether political, religious, moral, ethical, whatever. (Exceptions like libel apply to people, individuals, not creeds or opinions.)

After all, speech that does not offend anyone does not need protection, does it.

And if someone resorts to violence to counter non-violent speech or other expression, the blame falls squarely on the former. No matter what someone says, countering and trying to suppress it with violence is wrong, period.

I would strongly disagree with any statement that would support anything like censorship under threat of violence.”

This argument has been expressed today by the French satirical magazine Charlie Hebdo as it publishes caricatures of the Prophet Mohammad.

The operative term is “offend”. It is far more than “contradict”, though slightly less than “insult”, which implies an ad hominem is remarks. “Offence” denotes aggressive posture and even suggests violation of the law (as in criminal offence) calling for riposte or punishment – either by hitting back, or ending the conversation (some would call it sulk). Certainly “offence” is unilateral behavior that shows no regard for the other. It is also gratuitous and whimsical, for it has no rhetorical value: one cannot convince anyone with offensive remarks. Somehow, this argument reminds me of: “off with the head” the Red Queen shouts. Are we all Red Queens now? 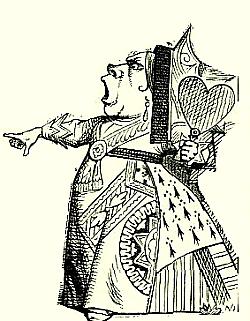 “Freedom of expression” has been reconfigured as the right “to offend, and in particular to disparage and ridicule opinions and creeds of any kind, whether political, religious, moral, ethical, whatever” on grounds that since “good speech” is its own reward (and thus safe), we only need to protect “bad speech” to secure 360° protection of all possible behaviors. Like money and freedom, freedom of expression has become here a meta-value, devoid of content, and in need of protection for its own sake.

I’ll admit to finding no substantive or rhetorical merit to an offence. What constructive purpose can “to disparage and ridicule opinions” bring? If “freedom of expression” affirms each person’s right to begin a social conversation offence yields just the opposite – it entails the right to end a conversation with a shout, a sneer, or a raspberry. What was meant as a personal “right to be included” has transmogrified into a personal “right to exclude” – a logical deduction in an ideological framework where everyone is sovereign and to be sovereign is to wield the right of exception[1].

I’m not sure that pursuing the logic of the argument here is going to lead us anywhere. Some issues may not be decided logically: they have to be decided empirically, that is in terms of what human societies are, and how they can adapt and survive.

We are social because we speak. The “right to offend” is to unilaterally disallow one’s right to speak, or to reduce the “other” to “bare life” (ζοή). When we render each other speechless by offending each other society becomes dysfunctional[2]. Caricatures, derisive films, and whatever else of this kind are then forms of exclusion. The reaction from Islamic quarters is understandable, and justified in view of the offender’s intent. For him to argue his right to “freedom of expression” is refusal to see the context in which the principle is applied – if not hypocrisy in those who deliberately chose to offend.

I’d like, however, to look beyond the specifics and try to ascertain the “hidden” consequences[3]. By far the largest part of what makes a society a living thing is based on shared and tacit rules and conventions. Language is one core example: the sounds and rules we share instinctively are precondition for explicitly talking about differences in need of explanation and, if need be, of new and overt rules[4]. “Ignoring” the hidden is efficient – we presume commonalities and focus on contingent differences. Commonalities, however, have a fundamental role to play: they tacitly create “trust” – and trust is the foundation of any social transaction. Societies only survive on their stock of trust – the silent common rules on which they build a veneer of explicit culture.

I’ll use a metaphor: we live unconsciously, and act consciously (well, sometimes). “Action” presupposes and is embedded in “life”. Society is no different: most of what makes society a living thing is tacit. As we argue endlessly about what makes us different from each other we tend to forget that differences are built on deepest tacit commonalities. Yet we fashion ourselves as autonomous – a delusion.

Exclusion renders the other “bare” – it strips him of tacit commonalities we share. Beyond the specifics of the offence exclusion destroys trust – for it denies the common tacit world we share. When trust is destroyed societies collapse.

There is a fundamental implication of this insight. We can only live, not devise silent rules. In a deeper sense establishing a laundry list of “fundamental rights” might be a distraction, unless it is needed to keep the state in check. What we need foremost is a shared sense of the common based on shared commonalities. I might translate it as decency and respect leading to a feeling of responsibility for the whole. This you can’t put in a UN Charta, not even in “soft law”: it is a lifelong education and commitment.

[1] Giorgio AGAMBEN (2005): State of Exception. University of Chicago Press, Chicago; also Giorgio AGAMBEN (1998): Homo sacer: sovereign power and bare life. University of Chicago Press, Chicago. His thought takes as point of departure Carl SCHMITT’s provocative account of sovereignty in his Political Theology of 1922. In opposition to legal theorists such as Hans Kelsen, for whom sovereignty could be ‘nothing else but the quality of a legal order’, Schmitt proclaimed the sovereign to be ‘he who decides the exception’.

[2] See Colin TURNBULL (1974): The mountain people. Picador, London. The Karamajong, at the edge of starvation, have come to rejoice in each other’s discomfiture – relates the anthropologist.

[3] See Frédéric BASTIAT (1850): What Is Seen and What Is Not Seen. https://bastiat.org/en/twisatwins.html

Curation – one of five essential e-competencies for DiplomatsThe darker side of diplomacy rev. 007
Scroll to top