This announcement might be somewhat premature – but it looks as “longhand” may be going the way of the Dodo. Young children are being first taught to write in print, and then moved on to using the keyboard. Longhand is no longer taught in many schools (unless I presume, one goes to a deliberately old-fashioned school emphasizing the 3R). The next generation will sort itself out in “those who do”, and “those who don’t” – no political affiliation intended. The one thereafter, I presume, will consider longhand as an oddity. Even the signature will have been replaced by fingerprint and iris scan (or we’ll have reverted to the Chinese seal). 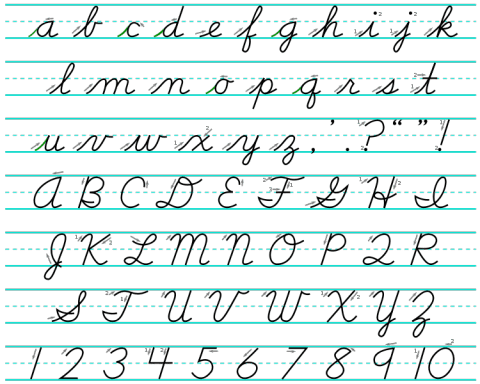 Cursive writing probably took hold with the Carolingian Renaissance. So, after 1200 years of loyal services, it shall be bundled off into oblivion. Should we regret or forget it, as we have forgotten the palanquin?

One of my favorite thinkers (and sociologists) is Richard SENNETT, who has come to his profession by the way of the Julliard School of Music, where he trained as a cellist. This experience as a crafter of sounds has given him unusual insights about the way our mind works.

SENNETT argues[1] that there is an “intimate connection between hand and head. Every good craftsman conducts a dialogue between concrete practices and thinking; this dialogue evolves into sustaining habits, and these establish a rhythm between problem solving and problem finding.” (pg. 9). He sees development of skill as evolving from mere practice to technical understanding based on the powers of the imagination. The imagination explores language that attempts to direct and guide bodily skill. As we experience resistance and ambiguity we learn from them rather than fight them. As we do so, we develop craftsmanship and motivation: “an enduring, basic human impulse, the desire to do a job well for its own sake” (pg. 9).

At an early age we all learned basic craftsmanship and motivation through our exercises in longhand; developing our personal signature was the pinnacle – the expression of our personality. No wonder graphologists have poured over our scribbles to detect telltale signs of our character and abilities.

Should we worry about the disappearance of longhand? Of course there may be other ways of learning craftsmanship and motivation. I’ve read of exercises where children are challenged to place a cotton ball on the open palm and push it to the tip of the finger, but no more. There are two basic differences though. Longhand is far larger and longer in scope – it challenges the child for several years, not just a few minutes. Longhand is “open-ended” – there is no sudden end to the process, and indeed, as we grow older we still evolve our handwriting. The “win” is in the satisfaction of getting the process “just right”, and is inherently subjective.

We live in a world of “incentives”. The essence of any incentive is that we respond to the outside stimulus of the “principal” (the employer, the state, markets) in a prescribed and verifiable way. Two things happen. First, our skills become instrumental. SENNETT’s “problem finding and problem solving” inherent in craftsmanship has been replaced by working in accordance with the “principal’s” will. If there are degrees of freedom left, they are subaltern – simply logically to be deduced from the principal’s instructions. Second, the reward no longer is in carrying out the process, but in meeting a foreign-determined target. The “open-ended” process has been transformed into a “win or lose” situation (the salary, the “good citizenship rating”).

Marx’s theory of alienation?[2] Yes, but I look at it through a different lens: humanity’s capacity to adapt. As “cultural” animals we humans depend on endless variation in our cultures for us to remain adaptive – we need “enablers” and more of them, not less. Craftsmanship and motivation have been the ultimate “enablers” in the past. They have driven our curiosity – from shaping a stone-tool in a better way to scientific research. We should be encouraging variation and craftsmanship if we want to survive – and evolve. Anything that shrinks this horizon – including the elimination of longhand for mere “efficiency” reasons – makes the future more difficult to master.

Should I worry about this? I’m afraid – yes. We are all in it together; and small changes may have huge effects.