In December 2008 Colleen GRAFFY, newly minted Deputy Undersecretary of State for Public Affairs, tweeted about her experience in the Iceland’s Blue Lagoon.

In 2009 Alec ROSS, social networks guru at the US State Department, tweeted in order to inform his twitter-world that he had “challenged the Syrian Minister of Telecom to a cake-eating contest.”

On May 25th 2011 Sweden’s MFA Carl BILDT sent a tweet to his homologue Khalid al KHALIFA of Qatar: “Trying to get in touch with you on an issue.”

Did any of these three tweets[1] serve any “diplomatic” or “public policy” purpose?

I’m definitely dumb: I don’t see any, though I see uses tweets may be put to.

The first two tweets might project “human angle” in diplomacy. Along the same line I’ll expect soon a tweet from a high-ranking diplomat: “Gathered Toby’s poop on morning walk.” (36 characters with spaces) The first ones to try the “human angle” story were Adam and Eve, when they told JHWH that they were hiding from him because they felt “naked” (as we all know, they were haplessly trying to distract God’s attention from the fact that they had snacked on a forbidden apple).

Hurried and harried journalists love “human angle” stories, and tweets might provide them with cues prior to a press conference. Tweets can provide “basic plots” on which the diplomat can expound during a press conference, thus soaking up quality conference time. When properly contextualized, “human angle” provide easy and entertaining copy. Readers sup on such sop, particularly if it is titillating, or funny – like the problematic swimming suit at Keflavik.

Incidentally, in the merciless war climbers of the greasy pole wage on each other, anything goes – in accordance with the principle: “does not matter what they say, as long as they talk about me.”

BILDT publicly justified his tweet as evidence of his knowledge of “modern means in a modern world”. Actually it only showed that he did not know how to send an SMS; or did not have the Minister’s phone number; or was a control freak (take your pick). . Or he might have hammed up to al KHALIFA, who is a notorious twitterato. An SMS would have achieved the same goal – alerting his counterpart – without letting the world know that Carl BILDT was up to “something” or the other.

Tweets are nothing new. Lonely Swiss cowhands on an alp would use an empty milk pail as blow-horn to alert a mate on the other side of the valley, or the master down below. Native Americans sent up puffs of smoke (134 puffs max?), and the Chinese lighted fires on towers along the Long Wall. It was faster than a Marathon jog, and safer, but more subject to misinterpretation. For quick information about events, tweets are great. Beyond this, just as with other public signals, one does not know what happens when the tweet spreads beyond the recognized circle of recipients. The message may go viral, or fizzle.

Tweets then are good for facts and factoids. Will they supersede the normal diplomatic communication? Hardly. Such communications have content. Content cannot be compressed into a few characters – or….

I may be wrong here. There is diplomatic content that has been cast in a few – or even just one word. Had he been able to tweet, John BOWIE may have replied with it to General Santa Anna, wowing not to surrender.

Come to think of it: Mao Zedong might have loved Twitter. Many entries in his Red Book are, or can be made, Twitter-size. Mussolini, could have spread his “to believe is to obey” faster than having slogans painted on walls.

Tweets are great to spread a message – except: followers may talk back. General George PATTON (no friend of mine) gloriously brushed aside warnings – that ships bound for Africa were being loaded without a plan for orderly disgorging the ordnance – with what may have been a twitter to stevedores: “load them anyhow; we’ll sort it out later”. Had such a tweet reached the grunts, who fought without proper equipment on account of PATTON’s breezy attitude to logistics, he might have been at the receiving end of tasty and salty tweets (it might have done him some good). His disdain for logistics cost many soldiers’ lives.

Which brings me to the “darker” side of Twitter. Twitter is good for orders, slogans, and commands – provided receivers are in no position to talk back. Angelina JOLIE has closed her TwitterProject[2]: she got many insults over the year she operated it. When people can “talk back” with impunity, they will.

So you don’t want tweets to start conversations – lest you be at the receiving end of unwelcome comments. You want the flow to be on-sided. Twitter is all about “shutting up” the other.

Amb. Dmitri ROGOZIN, Russian representative at NATO, sends out tweets like this one: “How many times should it be reminded how dangerous it is. The bear will come out and beat up those miserable hunters!” The text is just a threat – and very effective (it does help the Ambassador that ¾ of his audience are in Russia). No reply is possible – unless his counterpart can best ROGOZIN’s one-liners.

To conclude: Twitter seems to me just an electronic version of the age old and homely graffiti. Nothing new under the sun, it seems. 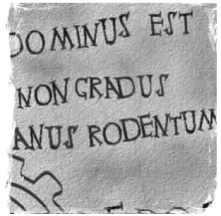 Net neutrality debate goes to the ITU WCITBridges for donkeys and some other metaphors … relating mind and world …...
Scroll to top