Where top is top
And bott’m is bott’m
Top down and bottom-up shall never meet
What if they tweet?[1]

Web 2.0 is about social networks: many individuals – particularly young ones – staying always close, influencing and being influenced by one’s neighbors in turn, having fun, and evolving, revolving unpredictably.

As usual we have precursors in nature 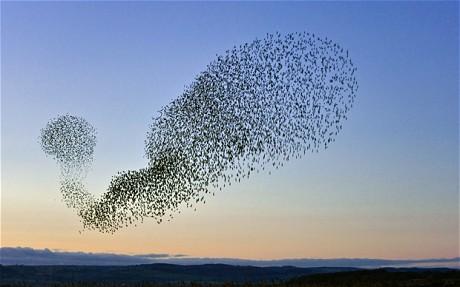 We don’t know how starlings do it exactly. But we know one thing: there is no leader; all these fluid flights of fancy are in accordance with simple shared rules that are applied locally, time and again. Within the flock communication is instant, and basic. It may go viral, as when the flock changes shape wildly. Groups can grow, split, and rejoin; there is probably no limit to size. Group behavior is essentially bottom-up and emergent. It is undirected and unpredictable (though our observations may lead us by fluke to “affirmation bias”).

Diplomacy is beginning to recognize this novel phenomenon of emergent social networks driven, in humans, by basic cultural rules – some call it memes[2]. Diplomacy is tempted to put it to use, and Web 2.0 activities would be a huge field where to experiment.

Diplomacy loves certain aspects of Web 2.0 – the fast spread of information (though it is often trivia), the coziness of closeness, the sudden focusing on one topic and the ensuing sharing of intention. So different from its previous, rather plodding, avatar Web 1.0.

Clearly there is vast scope for a multiplicity of subaltern diplomatic  information and communication activities (e.g. consular services). More power to the inventive! What about “core” diplomatic business – shaping nations’ minds to suit one’s own interests?

Among participants in Web 2.0 networks intention may be shared, but not directed[3]. So participation comes with a price: the loss of top-down intentionality and autonomy. Who is part of the pack runs with the pack, and better not try to become its leader. Individuality and identity recede – on the web one is “virtually naked” of status and roles.

What’s the use of participating, if we can’t significantly shape and influence? This is the core antinomy, and one which diplomacy needs to grapple with. To put it in a nutshell: James GLASSMAN, US Undersecretary for Public Affairs, has argued “it’s not about us”[4] – fine, what is then in it for “US”?

Diplomats who want to use Web 2.0 intuit these things: they spend a lot of time portraying themselves as “one of the pack” – by sharing trivia (they call it “human side” – I may call it goofing off). True, diplomats may “converse” – but it is a local conversation that only reaches a few[5]. It may be shared, but retweets are beyond control, hence double-edged.

Diplomats may make a social network possible by providing and supporting an easy and appealing platform – the photos, the games and the prizes – but such favors do not translate into influence. There is competition among platforms, furthermore, so one can expect costs to go up (China might trump free trips to the US to youths who track the US embassy blog in Djakarta with free trips to X’ian).

There are follow-up questions to such reflections. Even if influence is exercised – how lasting is it? We have too little experience with Web 2.0 to know whether its gyrations and evolutions lead to fanciful flights of starlings or more and permanent changes in attitudes and propensities. Assume we “win hearts and minds” – will they remain faithful? One change of mind may lead to another – how enduring are they, particularly in a social network setting?

When individuality and identity are at stake – as with all institutional participants or public figures – commitment is continuous, irreversible, and very costly in terms of a leader’s time and supporting resources. Riding the Web 2.0 tiger may be more than a well-meaning diplomat has wished for. It is also highly risky: a hurried or unthinking mistake may fatally wound a long-standing effort, or an extraneous matter may bring the whole effort down (as the incident of the Danish caricatures can attest).

Web 2.0 is predicated on “conversations”. James GLASSMAN has called for “conversations” to undergird America’s public diplomacy. Theodore ZELDIN, the great student of conversations, has defined the intended outcome as “changing one’s mind ever so slightly”[6]. Wonderful: next time a social network “conversation” has changed US policy – let me know. If one wants to use Web 2.0 in accordance to its rules one is to address this fundamental asymmetry of behavior between participants. Unilateral exchanges do not go unnoticed.

States have unique intentionalities. The temptation to use (and abuse) Web 2.0 to achieve “nation branding” by new means is well-nay irresistible – who said that “public diplomacy” is “propaganda with a human face”? In critical areas “predator – prey” dynamics will emerge (as in the case of the Israeli-Palestinian conflict), which will locally undermine the genuine and spontaneous character (a proxy for truth) of the Web 2.0 approach. Disenchantment may spread to Web 2.0 as a whole.

Representativity becomes an issue when social networks take on a public role. The Arab Spring movements were urban and local. General elections yielded different and unexpected outcomes – the “silent majority” had different views. Also social networks may “churn” an issue beyond usefulness. During Iran’s “Twitter Revolution” of 2009 only about 24% of the tweets originated in Iran, misleading the participants in overestimating their political strength inside the country.

US Secretary of State Hillary R. CLINTON has spearheaded a drive towards eDiplomacy. She may be applying here the lesson from losing the Democratic nomination to web-wise Obama. She may be right – or it may be a case of “false analogy”: winning a nomination is fundamentally unlike winning “hearts and minds” worldwide in enduring fashion.

[1] A lousy ditty, I agree – but it underscores the core point of this text.

[2] Richard DAWINS coined this term. Though his analogy to the granularity of genes is wrong, other aspects may be useful. “There is no “selfish gene”, for genes are encased together in one phenotype, on which selective pressure is applied. On the other hand there is no “phenotype” for culture, so the anarchic and “selfish character” of memes, or ideas, may be much more pronounced. Selection is a wild process – if at all. This is enhanced by the fact that “selective pressure” is ongoing and not just at the moment of reproduction as with phenotypes.

[3] President Elect Barack Obama organized something like a “virtual townhouse meeting” and solicited ides for a “Citizen’s Briefing Book”. 125’000 people responded, 1.4 million votes were expressed on 44’000 suggestions. Legalizing marijuana was first choice. I’ll leave it to others to decide whether this is an instance of Parkinson’s “bicycle shed discussion”, crowd behavior, or fluke.

[5] The “local” character of such conversations becomes evident when one looks at specifics. The EU Parliament’s Facebook has 365’000 “likes”, as against 30’000 for the EU Commission, and 20’000 for the European Council. Pro memoria: the EU population is over 400 million.

Survival guide for the online/in situ blended events: Online participation needs to be part of the agenda