1972 was hardly a “sterling” year. The US had just unilaterally terminated the convertibility to gold and the world economy was struggling with the new system of freely convertible currencies. Inflation was on the rise, and so were commodity prices. Wages stagnated. The Vietnam War was going badly. Inchoate protest had spread from the fringes to society as a whole[1]. The prevailing whiggish view of inevitable historical progress looked increasingly frayed; self-doubt had spread together with social unrest.

And then the Club of Rome published “The Limits of Growth” (LoG). Failing drastic self-restraint in consumption – the message was – LoG unassailable mathematical model unequivocally predicted the end of civilization by the half of this century – or thereabouts. Civilizational catastrophe loomed just around the corner.

Bjørn LOMBORG has revisited this epochal book in the latest issue of Foreign Affairs[2]. The article is written in a somewhat  hectoring and strident tone. One best ignores the author’s style. Some of the points LOMBORG is making are worth reflecting upon.

After crunching untold number of equations LoG pontificated: Given (a) increasing shortages in agricultural land, (b) scarcity of non-renewable resources, (c) increasing population, and (d) pollution, the fifth factor – industrial production – would be sacrificed in a desperate and futile attempt to feed the world. To no avail: “The only hope to avoid a civilizational collapse, the authors argued, was through draconian policies that forced people to have fewer children and cut back on their consumption, stabilizing society at a level that would be significantly poorer than the present one.” LOMBORG sums up. 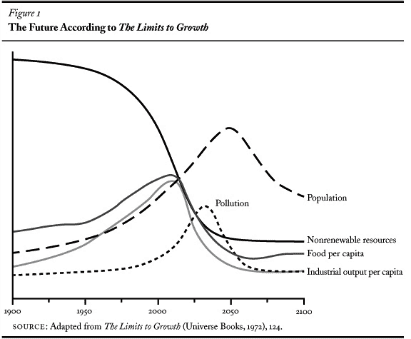 Looking at the LOG predictions in the light of hindsight the results are truly disappointing. We are far from the poor-house. The last 40 years have marked significant (if not adequate) human progress in about all statistics of human development. And the future looks bright[3], if somewhat hotter.

Admittedly, it was the very beginning of the “modeling era”. One might make allowances for neophyte’s errors and argue that the study was merely wrong in its timing, not in its predicted scenario. I can hear people muttering: “Sure we got away with it by the skin of our teeth. But next time…!” We enter here the murky area of yearly announcments that “the end of the world is ten years from now”.

LOMBORG puts down the dismal failure to the modelers’ inability to forecast “human ingenuity”. The term is vague – his examples point to technology and individual creativity. He concludes: “None of this means that the earth and its resources are not finite. But it does suggest that the amount of resources that can ultimately be generated with the help of human ingenuity is far beyond what human consumption requires.” This seems a bit triumphalist to me.

I’d rather use “enablers” instead.

Enablers are propensities – not inevitabilities like mechanical laws. Technology – an invention or a new production process – is clearly an “enabler”. Mindsets too are enablers[4]. Worldviews, ideologies, and social emotions are “enablers” – they determine the horizon of the social imagination. Social structures too are “enablers” – the way we organize society determines what we may be allowed to do as individuals and what we may achieve as a group. And, of course, the values we hold are “enablers” – whether we prize education or homeliness, work or leisure, are important for the long term success of a society. Enablers all work together; not by direction or coercion but by a complex mixture of persuasion and habituation –what Alexis de Tocqueville called “the slow and quiet action of society upon itself”.

There are many other such “hidden movers” whose effects we only dimly perceive. Common to enablers is that they may lay dormant for ages – in evolution it is easily millions of years – until circumstances bring them to the fore (take inventions – LOMBORG’s drivers: they may lay dormant for centuries, and then spread in a wildfire of innovation and adoption). Consequently the list of “enablers” is never complete.

Underlying LoG is a tight network of “known” and measurable mechanistic inevitabilities. One may tweak the parameters here and there, but not the structure: the outcome is inherent in the model, hence pre-determined. In Mickawberian fashion LoG’s premises predict inevitable outcomes.

LoG is a “closed” and ineluctable system – the Ancients called it “Procustes Bed”. A dispositional world of “enablers”, on the other hand, yields an “open” system with many possibilities and contingencies. Though I suspect Imay have hotly espoused LoG at the time (I can’t remember) today my take is that, for good or bad, mankind will always surprise us in novel ways.

Did the emotional success of LoG rest on its character of imminent “catastrophe foretold”? I’d suspect it did: it may have satisfied deep guilt feelings in an opulent society already destabilized by the threat of terminal nuclear catastrophe. After an initial impact LoG faded from consciousness. Its effects lingered – unspoken. It enabled secular[5] “catastrophic thinking”.

LOMBORG has much to say about this new mindset, and I’ll outline and comment on it in a next post.

[2]           Bjørn LOMBORG (2012): Environmental alarmism, then and now. The Club of Rome’s problem – and ours. Foreign Affairs, July/August. https://www.foreignaffairs.com/articles/137681/bjorn-lomborg/environmental-alarmism-then-and-now

[3]           How far we have travelled in this respect may be gleaned from the fact that the Intergovernmental Panel on Climate Change, for example, the only major group to have set out informed GDP scenarios through 2100, estimates that global GDP per capita will increase 14-fold over the century and increase 24-fold in the developing world.