I’ve followed – with mild though lingering interest – the development of fusion technology. A nuclear engineer friend of mind introduced me to its potentials in the late 60s.

The promise of the technology is staggering. Heating the most common element on earth – hydrogen – to “sun-like” temperatures one could essentially solve the earth’s energy problems at a stroke. Fusion is the “royal way” to unlimited energy. 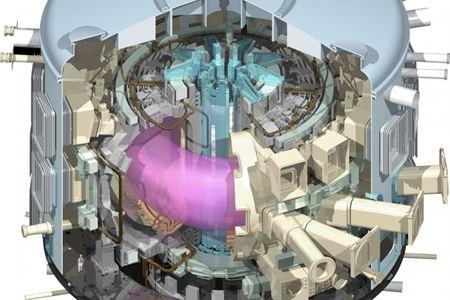 A recent article in Scientific American[1] takes a reading at the state of the endeavor. I recommend diplomats involved in technology cooperation to read it.

Holding the sun’s energy safely within one’s hands has proven to be no easy task. It took more than a generation to yield feasibility – to achieve “net energy” output. Then the problem of “scaling up” became critical. The larger the intended “sun”, the more difficult it became to design an appropriate hearth: “the larger and more powerful a machine becomes, the more energy it consumes trying to hold everything together”. (pg. 44)

Long odds attract high stake gamblers: fusion was always an area for strong scientific and administrative egos. Long odds also imply huge investments. Governments were drawn into the project. It became an international prestige race. By 1985 it was clear that useful “net energy” was beyond any state’s capacity to design and fund. A lull in the Cold War provided a way out: ITER (as the project was named), became a world-wide cooperation effort – harbinger of a better scientific world.

Ten years later the planning effort had grown into humungous proportions – it was “too much everything”. Occam ’s razor was bureaucratically applied. The down-sized version of ITER, however, was not simpler – it was also highly imperfect. Furthermore, with states as partners rather than component suppliers, the design process became a political, rather than a technical matter. The budget has gone from 5 to 20 billion US$ and construction will be completed by 2025 – Inshallah.

“ITER will prove whether fusion is achievable. It will not prove whether it is commercially viable” (pg. 45) – says BRUMFIELD. It is still far too complex for industrial operation. “Another generation of expensive demonstration reactors must be built before fusion might come on the grid – say around 2050 -70[2]. The journalist fails to note that ITER enshrines roughly speaking “2000 technology”. By the time it is built and “proven” in 2030-35 it will be technologically out of date. Upgrading the technology for the new generation of demonstration reactors will imply design delays: the key element is maintaining the overall integrity of the complex system as components are replaced. Simulation helps, but it too relies on dated knowhow. Given the engineering requirements, the first “industrially useful” reactors would be using technology easily 50 years old[3] (meanwhile, the lowly hydrogen has yielded to high cost and radioactive tritium – adding a new dimension of social difficulty, which has yet to be broached).

As I read all this the 45-year old words of my nuclear engineer friend echo in my mind: “Look, the world does not hold enough rare earths to build enough commercial “hearths”. The limit is materials – well before it is technology.” (And that was way before we began scouring the earth for rare earths to put into mobile phones).

What is the difference between an accountant and an economist? After completing a project or policy the former will ask: “What has it cost?”; the second will ask: “what opportunity have we lost?”

Policy makers (and their diplomatic advisors) should resist the policy inevitability that “because” a technology exists and has promise it is a “must”. Not only may the goal simply be beyond one’s resources to achieve; or we may do better with our resources than try for that goal outright. They should further be aware of the unintended effects of mixing both personal and national egos with friendly (international) cooperation/competition. It can easily generate path-dependent outcomes, which Barbara TUCHMAN aptly called “The march of fools[4]” – we knew the outcome, but did it anyway.

[2]           I assume that the “new” generation’s design can be fixed within ten years of ITER going on line (on schedule) and that the construction time lasts 20 years – which is currently standard for projects of this size. These (very optimistic) lead times imply incidentally that each new cycle will start with neophyte scientists, engineers and workers, for the previous one will have retired. How much essential knowhow will be lost is an unknown matter. With nuclear reactors now about to be launched this seems to be a critical issue.

Furthermore, the projection does not address the question of “re-nationalising” the international effort for industrial energy generation. At the moment there is international division of tasks among the teams so as to generate synergies. In the industrial phase, however, each country or group of countries will have to master all technology components, rather than rely on international cooperation.

[3]           This problem has severely affected the Space Shuttle already. The Shuttles incorporated 1970s technologies and flew with it because redesigning would have conflicted with the flight schedule.

Author interview: eDiplomacy: foreign policy and social media150 – “Either you are with us, or you are with the terrorists!̶...
Scroll to top