You are here: Home1 / 148 – Ambassadorial tribulations

Pity the Swedish Ambassador to Belarus HE Stefan ERIKSSON. He is an “old hand”, accredited to the country since 2005. He speaks the language fluently and has come to know the country deeply as well as become a “major public figure”. All indications are that he has been a credit to his country and the profession. 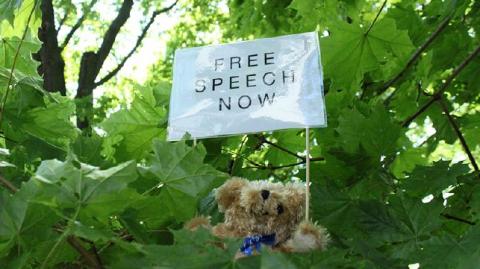 And then … 789 teddy bears fell out of the sky. In the wake of this portentous event, he was shown the door with two other Swedish diplomats. They shook hands with Belarus diplomats made to leave Stockholm in retaliation – if they had a grim sense of humour, that is. In fact, Belarus has just severed diplomatic relations with Sweden, so the latest news reports.

Jamestown Foundation reports[1] this bizarre tale: a Swedish public relations firm, Studio Total, which specializes in revolutionary advertisements, dispatched a small plane from Lithuania that dropped 789 teddy bears into the town of Ivyanets, in the Valozhyn district of Minsk Voblast. The drop was meant for Minsk, probably, but it fell 40 miles short of its primary target (Ambassador ERIKSSON knew nothing of the caper – of course). The stunt, designed to focus more attention on press freedom and civil violations in Belarus, irritated President Alyaksandr Lukashenka no end. It did not help that, as a former border guard, the President was particularly sensitive to “border” matters. In fairness to the Belarus President, he concomitantly fired a lot of his own top people as well.

“First, the stunt was a major embarrassment to the Belarusian authorities.” reports Jamestown Foundation. “The Lukashenka regime has made much publicity over the guarding of its borders, especially on occasions commemorating the “Great Patriotic War. He may have also been provoked by the open and unedited letter addressed to him by Studio Total, which included the statement: “On the internet, you are regarded as a clown” and that in preparing the mission, it was easy to ascertain the necessary information about Belarusian air defence on Wikipedia, and that the description was invariably the same in all places: “a brutal, but severely malfunctioning mechanism, best suited for parades and for harassing civilians”.” This kind of public lambasting was pouring salt into the wound.

Non-state actors have always tried to force the hand of diplomacy. Chinese traders established themselves in Korea, 2000 years ago, in order to be recognised eventually by the Yellow Emperor as “subordinate kings”, and given official status and security of tenure[2]. The XIXth century saw Western romantic heroes fighting for emergent Greece, Hungary, or what not. The novelty today is the likely impact of such interventions in the viral global village as well as the unpredictability of targeting – there are more “good causes” than celebrities. Ambassador ERIKSSON was the unintended victim – smothered by the 789 teddy bears meant to shake the world.

As a diplomat, you better always expect the unexpected (rather than instructions).

[2] See: Ying-Shih YÜ (1967): Trade and expansion in Han China. A study in the structure of Sino-Barbarian economic relations. University of California Press, Berkeley.

147 – Is war a biological trait?NEW: Accredited Master’s degree with a specialisation in Internet governa...
Scroll to top