John KEEGAN, the great historian of warfare[1], just died. After studying warfare all his life he came to the startling conclusion: “Keegan’s book serves as a potent counterpoint to—and more, refutation of—popular claims by scientists such as Richard WRANGHAM and Edward O. WILSON that war stems from deep-rooted biological impulses we share with chimpanzees. Keegan weighed and rejected these theories as well as ones attributing war to environmental and economic factors, notably overpopulation and scarcity of resources”[2]. “War, Keegan proposed, stems primarily neither from “human nature” nor economic factors but from the “institution of war itself.” War, in other words, is a self-perpetuating meme.” (emphasis mine).

“Meme” is indeed an interesting construct to toy with (but beware of taking it for more than a playful construct). It was invented by the biologist Richard DAWKINS[3]. He described the concept of “meme” as “an idea, behavior or style that spreads from person to person within a culture.” It refers to the intuitive[4] observation that ideas (they need not be verbal, or conscious), once created, tend to spread among people, replicate, and somehow “take on a life of their own” – they are “in the air” and people orient themselves by them. “Zeitgeist” – the spirit of the time” circumscribes this phenomenon.

“Memes” then behave like a gene, in that they are “replicators” – they spread across a population; they are not, however, anchored in genes, but have somehow an “identity of their own”. I suspect that this description is close to what KEEGAN meant: ideas sometimes take off within a social group, ideas that an outsider would look at with great curiosity, if not mirth. Penis sheats are an example. Useless unless to impress the ladies (now would you ladies stop giggling at the silliness of the men?), and once the race has begun, it is most difficult to bring the lark to a halt. Whimsical all, were it not for the very real social consequences – like in the case of war. 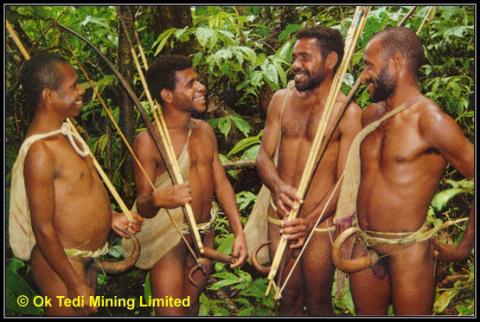 I have long been impressed by war as “contract with the dead”. The heroes die for the group, and in return the group worships their memory. It is a backhanded way for the deceased of achieving an immortality of sorts. These “contracts” may not be broken – just as with the chain letters curses will afflict whoever breaks the bond. Warring behavior may have emerged from such social conventions[5] – and self-replicated down the generations without anyone able to stop it.

No social behavior is destiny, though. For reasons which would be hard to fathom and even more difficult to predict the treadmill of violence may stop. We may be shifting on to an “escalator of reason”[6]. “Peer selection” e.g. might be a (controversial) means of cleansing social behavior of undesirable traits[7]. “Peer” may apply to states as well. It has been said that the XXth century was wasted teaching Germany “good international manners”. Certainly as a state and as a social group Germany today rejects its militarism of yore. It does help that Germany it becoming the preponderant country in Europe peacefully, thanks to size, numbers – and effort.

KEEGAN may have had something similar in mind when he viewed war as a “meme” – something that had emerged somehow but could grow “out of fashion” just as mysteriously. I’d concur – no moral judgments or whiggish view of history, just contingencies. Here a few.

In the last months of WWII the US killed about one million Japanese civilians – the A-bombs not included. No country today would dare to do the same (unless they can hide the deed, as the US did when they secretly bombed Laos in 1961, and then Cambodia, but the number of victims was far less). The outcry both at home and internationally from witnessing the carnage live on prime time TV would soon have brought matters to an end.

Densification of relations within society also helps. To navigate complex societies we daily follow more and more rules: “obeying rules” has become second nature – they are so many and they all make sense. Even Italians have better road manners. Taking the very long view overt violence within our societies is on the wane[8]. Increasing prohibitions within a complex society come with a multitude of “offsetting” opportunities. Trawling for partners at the office is out nowadays – who cares? There are so many novel ways of mating through the internet.

The wars in Iraq and Afghanistan have shown that conquest no longer yields the intended consequences. These societies may have been shattered, but not transformed by war in ways the “victor” imagined. Imperial action did not yield “its own reality”.

These countries were developing, and thus more “resilient” than fully developed societies. I try imagining the invasion of a European country along lines like those of WWII – plain unimaginable todays, where everything is “just in time” and the supply chains span the world. Within days hapless millions would be starving, rioting, and generally speaking overwhelm any military movement. Were we to ask today’s Pentagon to “invade” Italy once again – it would throw in the towel.

Even targeted transnational violence – the destruction of rogue individuals or installations – is becoming politically difficult to sustain. So we are losing faith in the capacity to attain our goals through war. Clausewitz’s dictum that “war is diplomacy by other means” has become an empty slogan.

Are we moving toward a Panglossian world? Far from it!

First: easy come easy go – what we observe are overly crude correlations, not causal relationships. War may get back in fashion again. Better awareness and understanding of mental process and cultural evolution may bring us many surprises yet. I wouldn’t bet much on preachy morals on the other hand – the historic record of morality as legitimizing or enforcing an oppressive status quo is just too discouraging.

Secondly: the serpent in us may just be changing its skin – shifting from overt to covert violence. Denying opportunities is often more sinister than punishment, for there is no recourse in the law and it affects whole groups, rather than singles out individuals. And when the exception from the law becomes the rule – in the name of “efficiency” – corruption becomes pervasive.

More generally – the legal structures of our societies are far better equipped to indict acts of commission than omission. We’ll sure go to hell if we break the Ten Commandments (the sixth in particular), but I’ve not seen much religious concern about failures to practice the “seven virtues” – in fact “virtue” has just about disappeared from public discourse[9]. Omissions are blanket-covered by the rule “ad impossibile nemo tenetur” aka “I was trying my best” – the excuse of the flunky bureaucrat. Who is to hold me accountable for stupidity, distraction, or lack of initiative? And omissions seldom leave trace for they need not be justified.

The ongoing destruction of solidarity systems in the name of “efficiency” hints at what may lie ahead. As the rich withdraw into their gated communities – continental, regional, and local – the poor are simply left to their own devices and to fend for themselves the best they can. A two-tier society of “haves” and “have nots” may emerge, covertly as violent as any war.

Would such a situation perdure? I don’t know. Attention is the key to survival. Electing to ignore the “have nots” is unlikely to prepare the “haves” for successful adaptation. One hardly sees well when nursing blind spots.

‘The poorer the country, the higher the cost’ – webinar host148 – Ambassadorial tribulations
Scroll to top