Admittedly – it’s the silly season. Articles get published at the moment that would hardly have a chance any other month of the year. Amy ZALMAN in The Globalist has just published the necrology of “soft power”[1]. Should we mourn the passing of this concept of political power?

ZALMAN first points out that the dichotomy “hard” vs. “soft” was an exercise in spurious academic categorization. The two are not categorical opposites: “the Obama Administration has dedicated itself to pursuing and promulgating the idea of “smart power”, which is meant to fuse both “hard” and “soft” power. Secretary of State Hillary CLINTON has used the term to describe a foreign policy that employs “all the tools at our disposal — diplomatic, military, political, legal and cultural.”

Indeed, ZALMAN is right in dismissing the dichotomy. Theodore ROOSEVELT characterized US foreign policy as “Speak softly and carry a big stick”. It sums up quite well the mix of policies pursued by the hegemon over time. 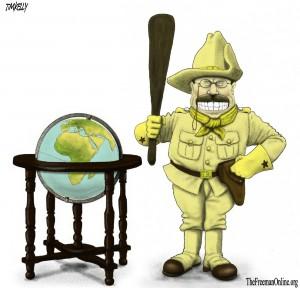 I’ll leave to the reader the task of judging whether CLINTON’s words are just hype. For my part I look bemused at the shifting of foreign policy decision-making in the US toward the Pentagon, where all the strands of “smartness” allegedly come together. US foreign policy is increasingly in the hands of people whose professional training has been military, rather than civilian. This development seems to me worth of more attention that a discussion on the relevance of the academic categorization of US foreign policy as “soft, “hard”, or “smart”.

ZALMAN, however,  points to something else: “everyday people are learning how to use information as a lever to gain power — and to use values and emotion in service of various causes” and the “rigorous state/non-state actor dichotomy, if it ever really existed, is disappearing fast”.

So what else is new? True, in pre-industrial societies foreign relations were often matters between extractive elites seeking control of people and resources; the peasantry was mobilized (nay pressed into service) in pursuit of foreign policy goals as needed. Even then, however, the dominated majority – today’s “non-state actors” – from time to time took the initiative and attempted to overthrow the extractive elite. If they failed, these “bottom-up” movements were called “jacqueries” – in they succeeded they were called “revolutions”.

Ever since the legitimacy of the state was made to rest on the “will of the governed” power elites had to compose with the “governed”, who at times took the initiative of formulating and expressing, rather than validating, their “will” – to the dismay of the then ruling elite. 1848 was such an instance. “Governed” BTW only refers to groups who were politically conscious at the time. 1848 failed because the urban middle-class movement did not succeed in co-opting the rest of the country.

From then on the power elites took good care in grounding their foreign policy in the “popular will”: after 1870, e.g. both France and Germany fostered patriotic societies of all stripes in preparation for the inevitable war. Without the Schützenverein in Germany, for instance, German mobilization would have been unthinkable.

The power elites manipulate the governed by intimating rhetorically that they are but humble agents of the principal – the people. The governed tend to acquiesce to this charade; sometimes they take the matter seriously, however, and erupt in “we the people” movements. It is all contingent and chaotic – and unpredictable.

The Arab Spring movements are thus easily recognized as instances of spontaneous “bottom-up” expressions of will by politically active “governed” – the urban youth. When this formulated will was put to the test of national elections the “silent” rest also had its say. Unsurprisingly the outcome of the vote was quite different from what the “revolutionary forces” intended. Meanwhile a fight for succession of the ousted elite goes on. Charismatic personalities may emerge unexpectedly – they usually do, when the in vacuum in the distribution of power. But I’m repeating myself (see my 87).

How disastrous categorization (and how ludicrous in my view) can be can be gleaned by IGNATIEFF’s latest blog on Syria[2], where this Canadian public intellectual (and failed PM aspirant) states, at the outset: “Syria is the moment in which the West should see that the world has truly broken into two. A loose alliance of struggling capitalist democracies now finds itself face to face with two authoritarian despotisms—Russia and China—something new in the annals of political science: kleptocracies that mix the market economy and the police state. These regimes will support tyrannies like Syria wherever it is in their interest to do so.”

Here we have the supporter of G. W. BUSH’s war of choice in Iraq once more positing a categorization of the world into “two’s” – the “West” and “authoritarian despotisms” (ever encountered a non-authoritarian despotism BTW?)[3]. Again, nothing new – this is how the struggle between Persians and the Greeks was clothed ideologically 2500 years ago.

Such generalizations serve no analytical purpose – they are rhetorical devices. Any analyst of international relations should shun them like the plague as well as waste no time in eulogizing them – before decent burial on a Tower of Silence. R.I.P

[3]           Today’s comments to this signal effort by Mr. IGNATIEFF to regain his role as public intellectual demonstrate how threadbare his ideology is.

The solar system, the atom, the Higgs Boson … the truth … “Nahhh, I’ll...
Scroll to top