Katharina HÖHNE, in the www.diplomacy.edu blog[1], has argued the power of analogy. She is right. All of trigonometry is based on analogy. Syllogisms are analogies. Analogies are useful points of departure in Bayesian processes – the way we learn from our errors[2]. Analogies are most powerful when they related to the material world, or are inspired by it – when their truthfulness can be tested empirically.

Analogies, however, can be false friends. In fact “false friends” – homonyms – the mistakes we make when transferring words from one language in another, are analogies. Most dangerous are analogies based on abstract concepts and mental constructs.

I’ve come across a splendid example of misplaced analogy: the origin of the stone statues (moai) on Easter Island[3]. The analogy worked as follows: In the West vertical societies built great structures. Conversely great structures imply vertical societies. Hence there must have been vertical societies on Easter Island. Since the Polynesians were incapable of creating them, either they came from South America (Heyerdhal), or from outer space (von Däniken). No trace of vertical societies were found on the island, hence, like in the West, it must have gone down to obliteration is an orgy of civil war. Jared DIAMOND provides even the location of battlefields – though there is no archeological evidence to back it up. 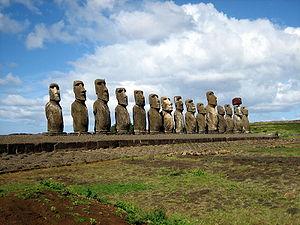 Such grand analogies tend to change with the fashion. Memories of wars and destruction have receded. Today our society feels queasy about overexploitation of natural resources. We have superseded the “civil war” trope with ecological “catastrophe” – as in the homonymous book by Jared DIAMOND[4]. His trope goes as follows: the Rapa Nui cut the island’s forests for tree trunks as rollers for moai transport and in order to clear agricultural land to feed the oversized population who was put to work on them. Deforestation followed. A paleo-ecologist elegiacally concludes: “the person who felled the last tree could see that it was the last tree. But he (or she) still felled it. This is what is so worrying. Humankind’s covetousness is boundless. Its selfishness appears to be genetically inborn. Selfishness leads to survival. Altruism leads to death. The selfish gene wins. But in a limited ecosystem, selfishness leads to increasing population imbalance, population crash, and ultimately extinction.”

The analogy to our own bad behavior is so convincing – but for a small detail: it happens to be wrong. One only has to ask the rats that came on the same canoe with the Polynesians: “Archeologist Steve “ATHENS concluded that the deforestation of the plain was a classic case of ecological devastation by an invasive species. The rats ate the seeds of native plants, including the nuts of the native Pritchardia palms, and that in turn effectively stopped the natural regeneration of trees. As fewer and fewer new trees grew, and more and more trees died off, the forest rapidly thinned. The stunning realization was that rats alone were capable of instigating massive, even rapid deforestation. Neither fire nor felling of trees was necessary, even though Polynesians certainly transformed their islands for agricultural production.”[5]

Another example of misplaced analogy is the question of how the moai were moved to their locations. Based on our habit of using wheels or rollers, we imagined the moais moving flat on their back or belly. Backbreaking work requiring huge numbers of workers – just read DIAMOND on it. Never mind the local people telling the archeologists that the statues “walked” – what do these natives know? Well, it turns out that the moai probably did “walk”, and that moving them could be done with a few dozen people. The statues were stood up and moved the same way we move refrigerators, by gingerly lifting them on the edge. Evidence? It had been done with replicas[6]. Furthermore, “walking” them works best when the center of gravity of the sculpture is low – as in a bowling pin. So the statues had fat bellies when they left the quarry. After the “walk”, once in place and erected, however, the surplus belly was honed away: the moai took on a much svelte shape.

Analogies relying on mental constructs (rather than material conditions) reflect the horizon of our imagination, hence its limitations. Analogies always keep us within the comfort zone of the known. We equate comfort with truth at our own peril.

Or put it another way: analogies are the high road to “self-affirmation” – they invariably give us the warm feeling that we “know”, or that the explanation is “plausible”. We’ll never let truth stand in the way of such a cuddly feeling.

[2]           Sharon Bertsch MCGRAYNE (2011): the theory that would not die – how Bayes’ rule cracked the enigma code, hunted down Russian submarines and emerged triumphant from two centuries of controversy. Yales University Press, New Haven.

[3]           Terry HUNT – Carl LIPO (2011): The Statues that Walked. Unraveling the mystery of Easter Island. Simon & Schuster, Inc.. For my review of the book see: https://www.amazon.com/The-Statues-that-Walked-Unraveling/product-reviews/1439150311/ref=cm_cr_pr_top_recent?ie=UTF8&showViewpoints=0&sortBy=bySubmissionDateDescending