The other day Jovan kindly suggested, in an eMail, that I “take a rest” after the shower of blog entries. The problem is – Sylvie and I are already taking a rest in God’s own country, aka Kerala, India. 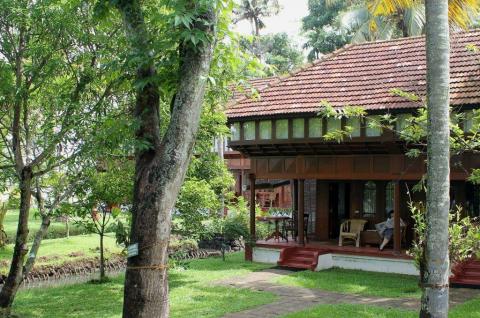 And when one is not working, one is more “productive” than when in full battle garb.

This is not an empty boast, I can prove it.

When we arrived at the resort, we soon discovered that there was something amiss in the food section. The dishes were less than appetizing; the fare often included hybrids meant to pander to unrefined palates (we had been here eight times before, so we were able to spot the letdowns). The staff was still friendly, but somewhat sullen, and dispirited. They felt out-of-state guests no longer appreciated local dishes – the resentment about the uncouth ignoramuses was palpable.

After a few days I decided that time had come to take matters in hand. Joking and nudging I proposed a “small change”.

Hoping probably to improve ratings, humdrum but “popular” fare had been put at the beginning of the buffet line. Kerala food followed, in places 8 – 12. If you start heaping food on the plate at “stop” N°1, there is no room left for more by the time one reaches the Kerala station. It remained untouched. If mixed with other helpings, it lost its subtle personality.

When approaching the buffet, I suggested, guests should be offered Kerala dishes as first choice; other food should follow as if mere afterthought. This meant reversing the current order of the display. Now the buffet starts like this: 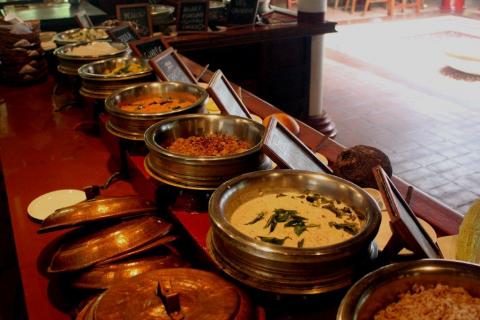 A small change: the impact was dramatic. The demand for Kerala food has shot up. Guests have become curious; dialogue ensues with the cooks, who now have a chance to promote local offerings. The staff feels that their suggestions are being heeded. Morale is distinctly up.

I’d just taken a leave from the social psychology, and used the power of “nudging”[1] to change things around – small cause, large effect.

The echoes of this change are still reverberating. Biju, one of the cooks, has unearthed a recipe from his 102-year old grandmother. Rasam, a digestive soup, is served after the dinner. More is to come, I’m sure.

I’ve already suggested to top management to “crowd-source” old family recipes before they are forgotten, and base a festival of “heritage food” on them. Who knows, it may take on.

134 – Of means and endsMetaphors and Images: Illustrating Climate Change
Scroll to top