While the Nazis perpetrated most of their atrocities in the East , occupied countries in the West were not exempt from hideous massacres [1].

Italy: When Italian resistance killed 33 German soldiers in Rome in 1944, 335 Italians were slaughtered at the Fosse Ardeatine[2]  twenty-four hours later. The “German” victims belonged to a police unit from South Tyrol (which is part of Italy) – allegedly they refused to take part in the revenge killings[3] . The chain of command responsible for the atrocity was tried in the years up to 1948 and found guilty. German soldiers who actually did the killing (80 -90 of them) were not tried.

France: In 1944 Germans wiped out the population of Oradour-sur-Glane[4]  in (mistaken) reprisal for the capture of a German soldier in nearby Oradour-sur-Vayres. The death toll was 634, including women and children. In 1953 21 SS-soldiers who had survived the war were brought to trial; their superiors had mostly died in the subsequent Normandy invasion. 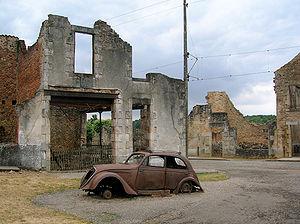 Among the accused were men from Alsace – by then reunited with France – who had been drafted by the occupying Nazi. All political hell broke loose at that point. Alsace claimed that these people had been coerced into serving – they were “malgré-nous” (in spite of us) – and bestowed on them status as “victims”, rather than executioners. The accused were found guilty – then immediately amnestied by the French Assemblée Nationale on grounds that the national unity of the country needed preserving. General De Gaulle concurred. It did not go unnoticed that urban Alsace was Catholic and conservative, while rural Limousin was rather Communist.

The trials followed different strategies. In Italy the target was the “chain of command”, in France it was the foot-folk, which happened to be mostly French. At this point the goal of bringing justice to the victims conflicted with the goal of uniting the country after the war.

The solution was political – and messy. I’m not sure that I’d have a better way of “cutting the Gordian knot”.

We quote the myth repeatedly. To me the myth is interesting for what it hides:

At one time the Phrygians were without a king. An oracle at Telmissus (the ancient capital of Phrygia) decreed that the next man to enter the city driving an ox-cart should become their king. A peasant farmer named Gordias drove into town on an ox-cart. (…) Gordias was declared king by the priests. Out of gratitude, his son Midas dedicated the ox-cart to the Phrygian and either tied it to a post or tied its shaft with an intricate knot. The ox-cart still stood in the king’s palace in the fourth century BC when Alexander arrived[5].

What a sword has cut asunder no longer is of any use. But when life goes on in a country after a civil war, somehow the knot needs to be tied up again. Solomonian justice will not bring peace, but rather perpetuate conflict. Meting out perfect justice[6] in such cases may be just about impossible .
___________

Corporate talk vs. action on climate change119 – A ‘Thematic’ EU Parliament – A Novel Institution for Europe...
Scroll to top